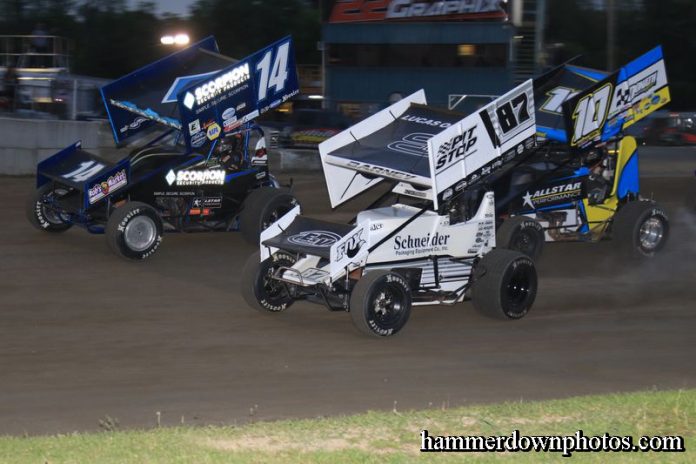 CORNWALL, ONT – When Jason Barney drew pole and Coleman Gulick drew outside pole it was to be a battle to the finish. Second and first in the Lucas Oil Empire Super Sprints (ESS) points, side by side on the quick quarter-mile on Cornwall, Ontario. To throw a monkey wrench in the mix, weather was moving in and no one really knew if the race would go the distance or not.

Add another plot to the drama was a caution on lap 24 make for a one lap, double file restart dash to the finish. With all the scenarios played out it came to that last restart to see who would win the Mach 1 A-Main and take home the most points in the overall championship as well as the 1000 Islands RV Centre Canada Tour.

When the green dropped, Barney immediately got the jump but Gulick did a quick cross over and tried the low side going into one. His move didn’t quite stick and it enabled Barney to go on to ESS win #2 on the year and 18th overall.

“I knew Coleman was going to be tough, he is just so good and he is real good in traffic,” noted Barney who collected $2,060 for the victory, “The track is tight and I knew slower traffic would figure in. He got by me, I got back by him and it was because of the slower cars.”

When 24 laps played out, the script had to be re-written for one final lap. “I just didn’t know how close he was in the closing laps and then we had the caution so I knew it was going to be tough,” Barney went on, “My car was good on restarts and I hope it was for one last time and I guess it was.”

For Gulick, the runner-up finish was his second in a row and he comes out of the weekend with the overall point lead. “We were close and gave it shot there in the end but just didn’t quite have enough,” Gulick said but overall happy with the weekend, “I just have to thank everyone for giving me a good car, two seconds is a real good weekend and we are getting more consistent. Can’t wait to keep the season going.”

Mike Mahaney finally shook off some bad luck to nip Steve Poirier at the stripe for his first podium finish on the 35th Anniversary Tour. Behind Poirier was Paulie Colagiovanni.

A big thank you to the Cornwall Speedway staff for doing everything possible to get the show in which included moving up the starting time by 30 minutes. Hard rain fell just about 10 minutes after the A-Main was complete. A total of 31 cars filled the pits on the Sunday night.