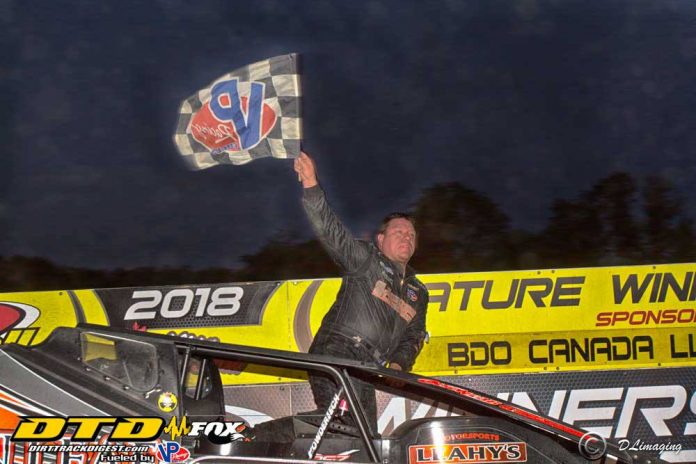 CORNWALL, ONT – The 30-lap Polar Sound DJ Services Modified from June 10th as Lee Ladouceur took the lead over Kevin Hamel and Dany Gagné. Brian McDonald made his way to the top three by lap 5. Caution was out for Pascal Daigle on lap 9. On the restart, Ladouceur had company in Gagné, Carey Terrance and Chris Raabe. Terrance had a strong car and was up to second by lap 12. A restart on lap 13 saw Terrance taking the lead. Terrance survived a few cautions in the middle portion. Terrance was flying on the speedway with McDonald in second, caution was out on lap 22. Terrance led the final laps to get his first win of the season.

The Next Level home improvement Sportsman was right after the Modifieds as Jason Rose took the lead over Justin Lalancette and Bob Ray. Lalancette took the lead as he used the outside lane on lap 9 over Rose as Delbert Legrow Jr, also had a great ride as the took second over Rose. With ten to go, Lalancette, Legrow, Thompson, Rose and Cedric Gauvreau rounded out the top 5 at that point. Lalancette led the final laps to win over Thompson and Shane Pecore.

The 25-lap Alexandria Home Hardware Pro-Stock was the final race of the evening with Gilles Godard leading the way over Kody Kelly and Marc Lalonde. Winning the remake earlier tonight, CD Beauchamp was on the move as he took the lead after starting in the 7th spot. Beauchamp got away from the field as Godard was in second with a good battle happening for third between Kelly and Lalonde. Beauchamp led the final laps and got his second win of the evening.

The Polar Sound DJ Services Modified from June 3rd saw Mario Clair taking the lead followed by Louie Jackson and Tyler Givogue. Jackson was on the back bumper of Clair by lap 10. Jackson found something in the middle lane and took the lead over Clair on lap 14. Jackson build a good lead over the rest of the field with 10 laps to go. Jackson dominated the last portion to grab his first career win in the 358-Modified over Carey Terrance and Clair.

The Alexandria Home Hardware Pro-Stock from last week started the evening as CD Beauchamp took the lead in the first lap after a good battle with a few competitors. While Beauchamp had a good lead, Stephane Lebrun and Marc Lalonde took second and third. Caution was out for Kevin Fetterly on lap 10. On the restart, Beauchamp stayed first with Jocelyn Roy making his way to second. Beauchamp remained in front with Roy close to him with 5 laps to go as Burton Ward brought the caution. Beauchamp led the final 5 circuits and broke the streak of Roy.

Next week the Lightning Sprints will be in town for one our two visits along with the Danny Lefebvre Memorial for Mini-Stock along with a complete race program.