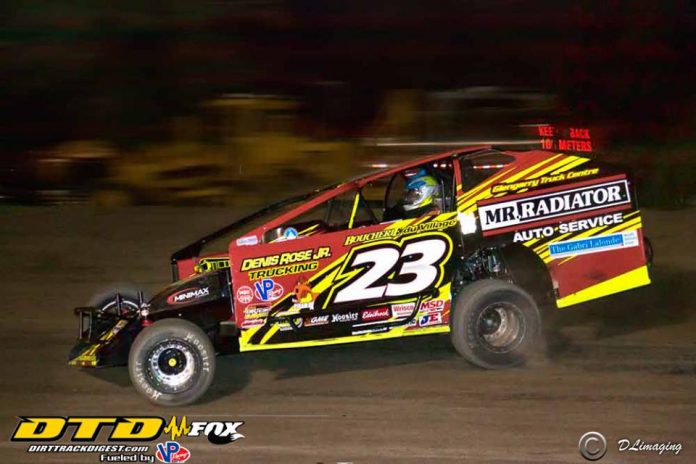 CORNWALL, ON – Martin Bélanger – A busy night of action at Cornwall Speedway as Archer’s Poultry Farms presented the Northeast Late Model Alliance, Lightning Sprints along with the Modifieds, Sportsman and Mini-Stock. Kyle Sopaz took the lead in the 35-lap Northeast Late Model Alliance over Charlie Sandercock. Sopaz took a few car lengths over Sandercock with John Pinsonneault in third. The battle for the lead was on with 10 laps in the books when Andy Mayhew having some issues. On the restart, Dale Caswell moved up to third spot when Ryan Goudie brought the red as he rolled outside of turn 2. Sopaz and Sandercock put on a show as Sandercock took the lead at halfway point and pulled away from the field. Sandercock led the final laps to capture the win and he remains undefeated in this series over Sopaz and Sandercock.

Tomy Moreau to the lead in the Lightning Sprint event, Moreau was followed by father
and son duo of Yanick Poirier and Jordan Poirier. The young Poirier made a few moves
to take the lead on lap 8 as the leaders came to traffic, Moreau was running in second
with Yanik Poirier in second. Moreau gave his second spot having issues with his car at
halfway point. Jordan Poirier had a dominant second portion and completed a perfect
weekend as he won at RPM Speedway the night before.


In the 30-lap Polar Sound DJ Services Modified, Steve Morris took the early lead over
Kevin Hamel and Mario Clair. Morris pulled away from the field with Clair moving up to
second and Hamel remaining in third. Clair came closer to Morris and was waiting for an
opportunity from the leader and it came on lap 14 and he passed in turn 4 and both
drivers collided without any damages. A lap 18 restart gave back the lead to Morris with
Clair fading to 6 th . Joey Ladouceur took the lead on a lap 20 restart with Morris in second.

The Next Level Home Improvement Sportsman Feature brought some good action as
Billy Cook led a good portion of the feature as Justin Lalancette got close to the leader
and passed him by halfway point, Lalancette went on to capture his third feature of the
season over Adam Rozon and Cook.


The Tracy Wheeler Assist2Sell Mini-Stock were the first to run for their 15 laps. Karl
Potvin took the lead and led a good part of it as brother Yanik joined him at the end of the
feature as they done some battle. The door opened at the end for Yanik and moved to first
on the final lap to capture his fourth feature of the season.

Next week, the Sportsman will have an important night as it will be the final race of the
Race for the Cure Sportsman Series along with a complete program as Seaway GM will
sponsor the night.
For more information on the upcoming season at Cornwall, please visit the website at
www.cornwallspeedway.com you can add us on Facebook at
www.facebook.com/cornwallspeedway or on twitter at @cmsspeedway, we will use
these two Medias for results and contests over the summer.