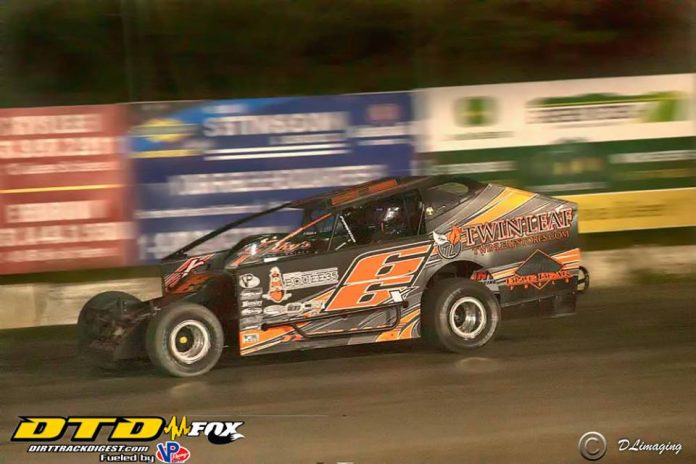 Cornwall, ON – Martin Bélanger – The Sportsman division had a very important night as the Race for the Cure Sportsman Series was ending with a very tight race as a full program was presented with the great folks of Seaway GM were on hand.

Johnathon Ferguson and Martin Pelletier led the field of 32 cars to the start, Pelletier was the early lead in front of Ferguson and Shane Pecore in third as caution was out on lap 4 for Mike Stacey. On the restart, Pelletier remained in control with Ferguson not far behind. Ferguson had a great car leading the way over Pelletier as Cayer moved up to third by lap 20. The battle continued for the lead between Ferguson and Pelletier as they exchanged the top spot for several laps, Ferguson made a slight error and Pelletier back to the lead on lap 35. Pelletier stayed in front surviving a few cautions as the feature reached the halfway point with Ferguson in second, Pecore, Brianna Ladouceur and Cayer completing the top 5 at that point. Pelletier pulled away from the field as Pecore was side by side with Ferguson for the second spot by lap 55. Running in third, Pecore had issues with his car and had to be brought to the pits on lap 61. On the restart, Pelletier remained first with Ladouceur moving up to third. Pelletier did well in heavy traffic and pulled away from Ferguson. Caution was out on lap 87 for Jason Shipclark. On the following green, Pelletier powered in front of Ferguson as Cayer passed Ladouceur for third. Pelletier led the final laps and captured the win, his second in the series in front of Ferguson and Cayer. With his second-place finish, Ferguson got his second Race for the Cure Sportsman feature in front of Brianna Ladouceur and Pelletier getting third.

The fundraiser of the Race for the Cure ended with the best edition of all three as $10,000 was collected, Samantha Marshall and Linda Sauvé, each left the speedway with $5,000, both in battle with cancer and receiving treatments at the Cornwall Hospital. During the ceremony, Brianna Ladouceur decided to donate $1,000 from her purse, boosting to $5,500 to the two recipients. Again, a huge thank you to Steve and Wendy Morris with their involvement in the Series and fundraiser making it so successful.


The Polar Sound DJ Services Modified division was last tonight as Mario Clair set the pace in the 30-lap event in front of Lee Ladouceur and Chris Raabe. Red was out on lap 4 as Kevin Poitras landed on his roof in turn 2. Lee Ladouceur had a great start as he took the lead over Clair with Corey Wheeler moving up to third by lap 8. At halfway point, Ladouceur on point with Carey Terrance making a charge from his third place. Terrance tried everything to pass Clair with 10 laps to go. Terrance was able to pass Clair and charged for the lead using the outside lane, he got it on lap 26. Terrance led the final portion and getting his third feature of the year, extending his lead in the point’s chase.

In the Alexandria Home Hardware Pro-Stock feature, Dave Seguin to the lead for 3 laps as Gilles Godard passed Seguin for the lead as CD Beauchamp made his way through the field and challenged Godard for the lead, Beauchamp got by Godard on lap 7. Beauchamp leading the way with Jocelyn Roy making his way to third. Roy used the outside lane and grabbed second and set sights to Beauchamp. Both drivers raced hard, but Beauchamp had the best car and won his fifth feature of the season.

It was a pretty exciting Tracy Wheeler Assist2Sell Mini-Stock 15-lap feature as Alexis Charbonneau took the lead early on and went to win his 4th feature of the season, Charbonneau had a scare crossing the feature as his car caught fire, Charbonneau was ok.

A very busy Sunday next week as the Can-Am Mod-Lite will be in town as we expect about 30 participants along with the Eastern Ontario Vintage Club, the Modified, Sportsman and Pro-Stock.