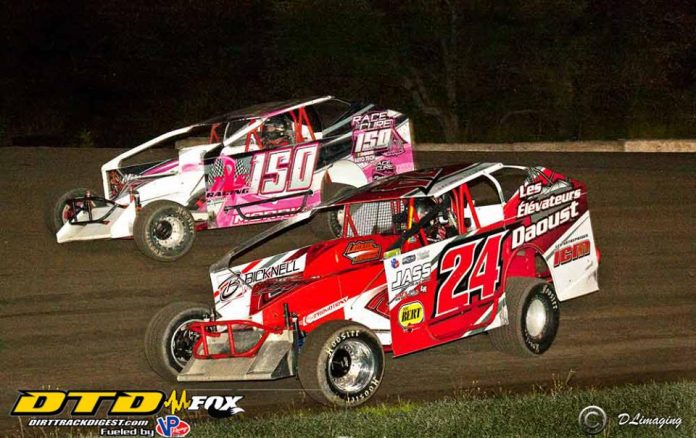 CORNWALL, ON – Martin Bélanger – A very busy night ofracing at Cornwall Motor Speedway with the remake of the Soleno Pro-Stock Seriesalong with the Can-Am Mod-Lite Series, Modified, Sportsman and Eastern Ontario Vintage Club.

Rock Aubin was the early leader in the Soleno Pro-Stock Series feature in front Michael
Blais and point’s leader CD Beauchamp in the third. The man on the move in the early
portion was Marc Lalonde he moved up to second by lap 15 and set sights on Aubin for
the lead. Dave Seguin was also quick as he got to third by halfway point. Dany Voghel
brought the caution on lap 31. A lap 32 restart provided bad luck as Aubin gave up his
lead after having a flat tire giving the lead to Dave Seguin. The driver of the 11a had a
strong car and pulled away from the field with 10 laps to go with Stephane Lebrun and
Steve Chaput second and third. Seguin led the final portion of the event to capture the
race, his first win since 2015, by finishing 4 th in the race, Beauchamp captures the Soleno
Pro-Stock Series.


In the 30-lap Polar Sound DJ Services Modified Feature, Mario Clair jumped to the lead
on lap 2 as Chris Raabe moved to second with Kevin Hamel in third. While Clair moved
away from the field, Raabe had some issues with his car and headed to the pits giving
second to Kayle Robidoux always quick on a tacky track. Clair was quick all night long
and went on to win his first feature of the season over Robidoux.

The 25-lap Next Level Home Improvement was the last feature of the evening as Justin
Desrosiers was the early leader as Shane Pecore moved up to second with Brianna
Ladouceur moving up to fourth by lap 8. Pecore to the lead on lap 9 with Ladouceur
taking third. Ladouceur was able to pass Desrosiers on lap 13. Pecore pulled away from
the field and went on to capture his third feature of the season in front of Tristan Draper
and Ladouceur.


Justin Williams led the field to green in 20-lap Can-Am Mod-Lite Series as Doug
Willams and Jeff May was running third. The leaders got into lap traffic as the feature
quickly hit the halfway point. The top 3 pulled away from the rest of the field, the red
flag flew for Scott Sharp who rolled over in turn 2. On the restart, Williams remained
first as May was able to grab second over Doug Williams. Justin Williams led all 20 laps
to capture the event.

Cory Winters took early control of the Eastern Ontario Vintage Club 20-lap feature with
Josh Powers and Paul Billings in third. Winters got challenges from Powers throughout
the race as Winter was able to win the race in front of Powers and Billings.

One of the biggest events of the season will be presented as the final round of the Draper
Doors Canadian Nationals along with the DIRTcar Sportsman Series plus a complete race
program as we will crown our season’s champion.

For more information on the upcoming season at Cornwall, please visit the website at
www.cornwallspeedway.com you can add us on Facebook at www.facebook.com/cornwallspeedway or on twitter at @cmsspeedway, we will use
these two Medias for results and contests over the summer.