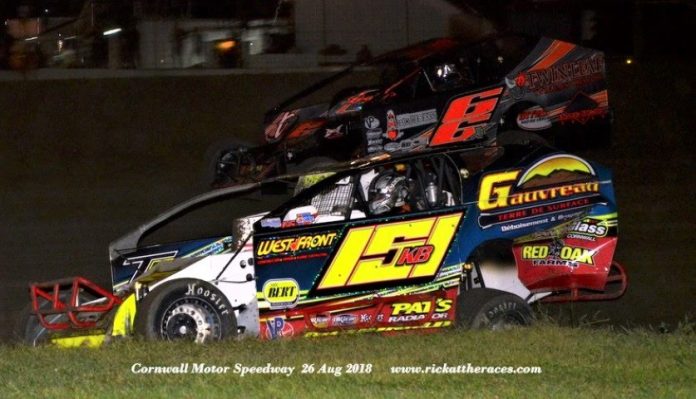 CORNWALL, ONT – The regular season will end this coming Sunday at Cornwall Motor Speedway as there is still a lot on the line for the final show that will include the Draper Doors Canadian Nationals Modified Series, DIRTcar Sportsman Series along with final point’s night in all divisions. The Co-Op of Embrun will be the main sponsor.

Carey Terrance could leave Cornwall Sunday night with 2 coveted titles as he currently leads the track championship race by 28 points over Kyle Dingwall and he is tied for the lead in the Draper Doors Canadian Nationals Series, with 125 laps and $5,000 on the line, Terrance will surely want to clinch both! A good field of cars is expected as the first 2 rounds attracted over 30 cars.

The closest battle of them all in the Next Level Home Improvement Sportsman as only a single point separates Shane Pecore and Brianna Ladouceur, not only both drivers have eyes on the track title but with the DIRTcar Sportsman Series in town as well, several invaders will be in town in order to win the 50-lap event as both drivers are following the tour as well.

In the Alexandria Home Hardware Pro-Stock, CD Beauchamp just needs to finish the feature to secure a first title in the division, the driver of the #88 machine has been strong and consistent all year long building a 35-point lead over Jocelyn Roy. 25 laps will be the distance for their final run of 2018.

We will see a champion being crowned in the Tracy Wheeler Assist2Sell Mini-Stock, making a return to competition, Chris James holds a small 10-point lead over Skylar Ladouceur, and both drivers had great years in the class. A 15-lap event is on the schedule.


Along with all the racing, nearly $20,000 in prize will be given to drivers who had perfect attendance in the 2018 season and the Canadian Nationals Series.