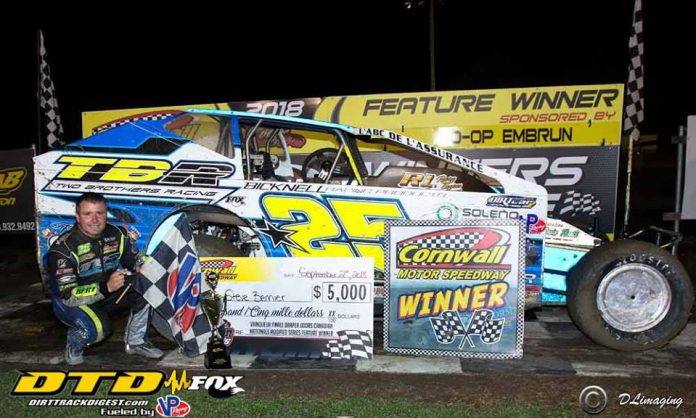 CORNWALL, ON – Martin Bélanger – It was championship night at Cornwall Motor Speedway, Mother Nature wanted to be part of the action in the early portion delaying the night a bit, but promoter Raymond Lavergne had a different opinion and the show sponsored by Co-op Embrun went on as planned.

Brian McDonald to the early lead in the final round of the Draper Doors Canadian
Nationals feature over Michael Parent and Luke Whitteker. The first 9 laps were quickly
done as Dany Bilodeau had issues with his ride bringing the race to yellow. McDonald
had a great ride as he kept the lead over Parent and Whitteker. On lap 19, McDonald
went a little too high in turn 2; Parent and Whitteker moved to the front with Steve
Bernier now running in third. Series contender Luke Whitteker came to a stop on lap 26,
as headed to the pits. Parent holding off Bernier on the restart with Mathieu Boisvert now
running in third. Mathieu Laramée loops in turn 4. On the restart, a big wreck occurred in
the front stretch involving the current point’s leader in both the season and the series
Carey Terrance, Louie Jackson, Steve Bernard, Dany Bilodeau, Kevin Hamel, Maxime
Plante, Steve Morris, Tim Fuller, all drivers were ok but all car sustained heavy damage
with 39 laps in. When the race resumed Steve Bernier went to the lead with Parent and
Mario Clair up to third. Bernier had a strong car all night as Boisvert claimed third at
halfway point. The laps clicked down as Kayle Robidoux brought caution on lap 70,
Robidoux was running in fourth. When the green lights came back, Clair jumped to third
and set sights on Parent for second, he used the outside lane to pass Parent and tried to
reel in the leader in Bernier. Some bad luck for Parent coming to a stop with 15 laps to
go. Bernier remained first in front of Clair and Whitteker back up to third. Bernier led the
final laps to win his first Canadian Nationals feature over Clair and Whitteker. By
finishing on the final step of the podium, Whitteker claimed the 2018 Draper Doors
Canadian Nationals. Carey Terrance wins a fourth track title in the division at Cornwall.

Michael Blais to the lead in the Alexandria Home Hardware Pro-Stock feature. Blais had
some company with Roch Aubin and Marc Lalonde. Aubin was persistent and was able
to pass Blais at halfway point with Blais keeping his second over Lalonde with 15 laps in
the books. Aubin went on to win his third feature of the season. CD Beauchamp claimed
his first championship in the Pro-Stock.

Martin Pelletier and Alex Lajoie led the field to green in the Co-Op Embrun 50, Pelletier
led the first lap as Jarrett Herbison slowed in turn 4 bringing the field together. On the
restart Pelletier kept the lead with Justin Lalancette moving up to second and Lajoie in
third. Caution was back out on lap 7 for Ricky Thompson. Pelletier to the lead as a good
battle for third was occurring between Adam Rozon and Martin Hebert. Pelletier pulled
away from the field as the first fifteen laps were in the books. A few cautions slowed the field down and Pelletier had great starts at each occasion with Justin Lalancette running a
strong second with Adam Rozon in third as the feature hit the halfway point. The race
picked some momentum as the leader joined lapped traffic, Lalancette started to
challenge the leader as they ran side by side for a few laps as the yellow slowed the field
down with 10 laps to go. On the following restart, Pelletier remained in first as Cornwall
point’s leader Shane Pecore cracked the top 3 as top 5 contenders Fred Gamache and
Adam Rozon got together losing some ground over the field. Pelletier went on to lead the
whole 50-lap event and captured his second DIRTcar Sportsman North Series win over
Lalancette and Pecore.

Marc Dagenais led the way in the final feature of the year in the Tracy Wheeler
Assist2sell Mini-Stock buy got pass by Corey Gates with new comer Sylvain Charest in
second as Yanik Potvin made his way to the front making a 3-way battle by halfway
point. Potvin used the outside lane to take the lead on lap 8. On a lap 10 restart, Charest
had a strong start and took the lead with Potvin on his back bumper. Charest went on to
win his first ever feature. Chris James was crowned the track champion.

The season will close out with the Fireball Enduro, the best day of entertainment for the
family in Eastern Ontario!

For more information on the upcoming season at Cornwall, please visit the website at
www.cornwallspeedway.com you can add us on Facebook at
www.facebook.com/cornwallspeedway or on twitter at @cmsspeedway, we will use
these two Medias for results and contests over the summer.