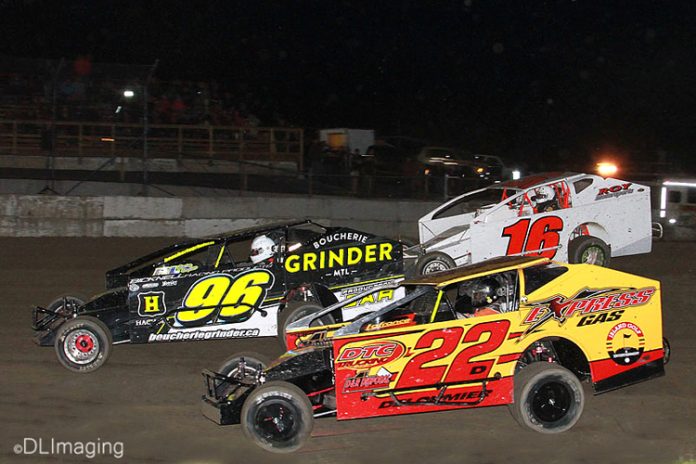 Cornwall, ONT – As Cornwall Motor Speedway will celebrate its 50th year of operations, the Lavergne family is unveiling another spectacular schedule for the 2019 season. A total of 19 events start on May 19 until September 8.

Again a pretty heavy schedule with no regular programs as we will have either a visiting series, categories added to our nightly events or a special attraction along with our action on the speedway, our race teams and race fans will find something that will please them during next summer!

Our season will start on May 19 with all our local mini-series in action with the Fat Les’s Chip Stand Canadian Nationals, the Race for the Cure Sportsman Series and both Weekend Warriors Series for Pro-Stock and Mini-Stock. These 4 series will have a minimum of 3 events and will attract several invaders in each division.

In addition of May 19, the Canadian Nationals will be in action on June 23 for a special 50-lap race that will be $5,000 to win, we will be celebrating the 50th anniversary of the speedway on that evening. The 3rd event will be run on August 4th and the series will conclude on September 1 with a 125-lap event. In the Race for the Cure Sportsman Series, the dates will be July 21 and August 4th. For the Weekend Warriors Pro-Stock, the Sisters for a Cure 50 will be run as a fundraiser race, the final race will be August 18. For the Weekend Warriors Mini-Stock, the Danny Lefebvre Memorial will be part of it on June 23rd and will end on August 18.

The Super DIRTcar Series will be in town on June 30, the series is in a great shape to start the season with 20 drivers confirmed to take on the grueling schedule for that series. Another date to circle on your calendar is Thursday, August 22 as we will present the 3rd edition of the Race for the Cure 150, the 150-lap feature event will pay $12,000 to win and a minimum of $500 to all drivers that will qualify. Seaway GM also added a nice $2,000 bonus to the highest Cornwall Speedway regular finisher in that race. A rain date of Sunday, September 15 has been secured for either one of these event.

Sprint Car fans will be happy to see both the Empire Super Sprints and Patriot Sprints on the schedule, the ESS are in town on June 2nd and the Patriot on July 21, both association brought solid fields of cars in the last few seasons. The Lightning Sprints are also on the schedule 3 times this season. Other series such as the Crate Late Models, the Vintage club, the Mini-Modified are in the schedule.
A unique event that was recently added in the last few days was the Flat Track Canada National Championship on Saturday, August 3rd, the announcement sparked a lot of positive interest on social media.

The popular DIRTcar Series are also not to be missed with the Pro-Stock Series on July 7th, the 358-Modified Series on July 14th and the Sportsman Series scheduled on the same night as the Race for the Cure 150 on August 22nd. The Farnham Ale & Lager Pro-Stock Series will also be on the car on June 23rd. The season will conclude with the always popular Fireball Enduro on September 8.

Again the promoters Raymond and Jacques Lavergne are promising another solid schedule for the 50th year of racing at Cornwall Motor Speedway. Other surprise announcements are in the books for the summer 2019!

The season passes sale will start with the early bird period on Monday March 18 and will continue until April 8. Special prices are in effect during that time.