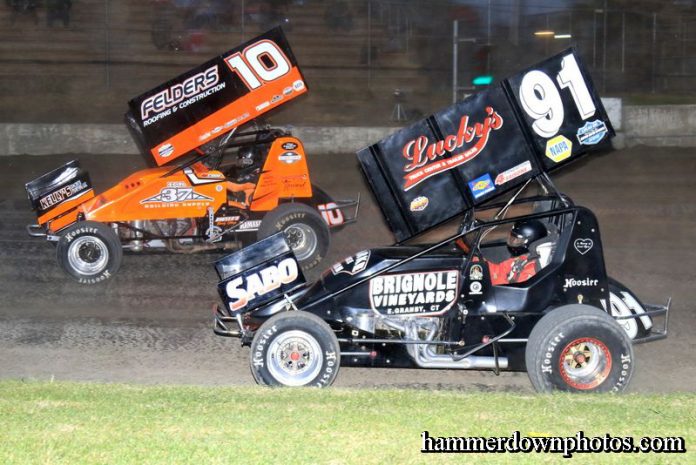 CORNWALL, ONT – The Empire Super Sprints are in town this coming Sunday at Cornwall Motor Speedway along with a regular night for the Modifieds, Sportsman and Mini-Stock. Propane Levac will proudly present this great evening of racing.

The Empire Super Sprints are always spectacular around the quarter mile track as we will see 11-second laps from several of the top names in the 360 Sprint Car division. The current ESS championship is really close as Jason Barney enters the initial Canadian trip with a 4-point lead over Chuck Hebing. There is a lot on the line this weekend for all drivers participating, the Canadian championship starts off on Friday night at Autodrome Granby, followed by Drummond and then Cornwall on Sunday along with the Quebec championship in which should attract a few extra teams to follow the 3-race weekend schedule.

Along with Barney, Hebing, Paulie Colagiovanni, Dave Franek, Matt Tanner, Shawn Donath, Kyle Moffit, Paul Kinney, Jeff Cook, Jonathan Preston will be in the field. All time ESS Feature winner with 74, Steve Poirier will lead a good mix of drivers from the Quebec area that will include Jordan Poirier who won last Sunday in the Lightning Sprints, Alex Vigneault, Dale Gosselin and rookie Bryan Cloutier. Some drivers from Ontario such as Chris Jones, Matt Billings, Paul Pekkonen, and Tyler Rand will be present along with some drivers from Oshweken Speedway that could join the field on Sunday.

The Loud and Dirty Modified division with share the spotlight with the Sprint Cars as they will run a regular 30-lap event, surprise invader Yan Bussiere still leads the points after the first two weeks into the racing season, only 4 points separates Bussiere, Chris Raabe and Corey Wheeler

Shane Pecore showed his colors early in the Next Level Home Improvement Sportsman division by winning both races, the field is quite impressive so far with more than 31 cars in attendance during each outing. Pecore will face a good challenge during the 25-lap feature race from Ryan Stabler, Johnathon Ferguson, Justin Lalancette, Brianna Ladouceur and many more.

The Assist2Sell Mini-Stock division is also on the card with a 15-lap feature, so far this season, 2 new drivers visited the winner circle, there are several quality cars in the field again this year and racing has been exciting so far!

The pit gates will open at 3pm to welcome the drivers, the admission cost will be $35. In general admission, doors will open at 5pm with a price of $25 for adults, $15 for senior 65 years plus and kids 16 years and under, it will cost $2 to access the grandstands. Heat races will start at 6:30pm.