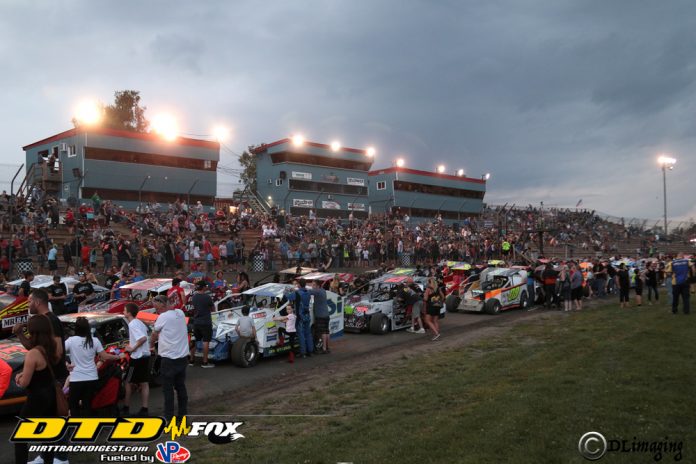 CORNWALL, ONT – We are starting to feel the excitement of a new racing season at Cornwall Motor Speedway especially with the annual banquet that closed out our 50th anniversary season last Saturday evening. Some announcements were made during our celebrations, here are some details.

It is more than $22,000 in money that was given to drivers last Saturday evening at the South Stormont Community Hall. Several of them such as Corey Wheeler, Shane Pecore, Carey Terrance, Stephane Lebrun, Ryan Stabler, Moise Page, Justin Jodoin and many others have left the banquet with more than one trophy and money in their pockets. The coveted Ron Morin Award was given to Ron Aubin for his long time contribution to the speedway and Pro-Stock class and the Mitch Jock Award was offered to Stephane Lafrance not only for his racing career but also for all he has done in the last years with his numerous innovations to make life easier for race teams.

Some announcements were made during the evening as the full calendar is expected to be ready in early March, from May 17 to September 13, 2020, it is 20 events that will be run as most of the visiting series are back such as the Super DIRTcar Series on June 28, the DIRTcar 358 Series on July 12 along with the annual 150-lap event on Thursday, August 27. The Fat Les Chip Stand Canadian Nationals is back with 4 dates including the kick off of the 2020 season on May 17 and the 150-lap event will be part of the series next summer.

The Next Level Home Improvement Sportsman will also have a very busy and fulfilling season with the Race for the Cure back for a 5th year with a $10,000 points funds and several other prizes and new ideas that will be announced in the coming weeks. The DIRTcar Sportsman Series will be back on August 27 along with a date secured for the GRIT Series that runs in Central New York, a northern portion was added for next season.

In the Alexandria Home Hardware Pro-Stock, the DIRTcar Pro-Stock, Farnham Ale, Weekend Warriors JLB Heating Series along with the fundraiser event for Dave Seguin will highlight the dozen events that will be part of the schedule. Some sponsors are currently working on ideas to attract more drivers into taking part in our races. The Tracy Wheeler Assist2Sell Mini-Stock schedule will have the Weekend Warriors and Danny Lefebvre part of it.

More than half of the schedule will include a visiting class or series such as the Empire Super Sprints, Patriot Sprints, Late Models, Lightning Sprints, Mini-Modifieds, Vintage and Mod-Lites. This will bring a variety in the schedule along with our regular classes.

Stay tuned in the coming weeks as more details will be announced as we are getting close to unveiling our 2020 calendar!