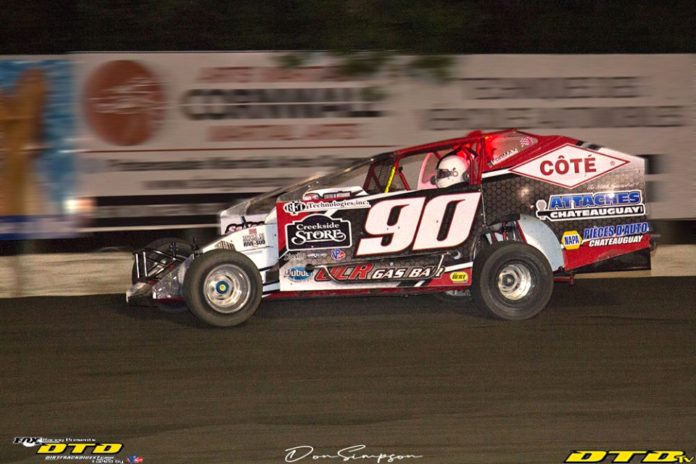 CORNWALL, ON – The Cornwall MotorSpeedway was finally able to present a race program without any spectators during thipandemic as the Back to The Track 50 was presented with Modified, Sportsman and Mini-Stock in action.

Yan Bussiere jumped to the lead in the Back to the Track 50 Modified feature in front of
Dany Gagne and Mat Williamson, the first 7 laps were done quickly as Francois
Bellemare spun in turn 3. Bussiere leads the way as Carey Terrance and Louie Jackson
have some issues with their rides on lap 11. While Bussiere was in front, Williamson
moved to second, but we saw some smoke coming out as he had to let go is second sport
by lap 20. Chris Raabe broke something in the back of this car and caution was out on lap
22. While Bussiere led the field, a few drivers moved their way as David Hebert crack the
top 5 by halfway point. Bussiere moved a little too high and Gagne wasted no time and
got the lead on lap 28. Gagne pulled away from the field as Tristan Draper slowed down
and caution came out with 39 laps in the books. The event concluded in a green-white-
checker as Dany Gagne made no errors and got his first win in the Modifieds over Yan
Bussiere and Corey Wheeler.


Johnathon Ferguson took the lead on the initial green of the back to track 50 in the
Sportsman as Justin Lalancette and Broen White had a great fight for second, the yellow
came out on lap 5 for J-F Tessier that slowed in the front stretch. Ferguson led two more
laps as Karl Potvin and Chris Ferguson got together in turn 4. Ferguson kept the lead as
Junior Mailhot moved to third. Cedric Gauvreau broke something at the back of his ride
and caution was out with 16 laps in. Ferguson had some challenges on restarts from
Lalancette and Mailhot but was able to build a sizeable lead by lap 32. Ferguson made no
errors and went on to win the feature in front of Lalancette and Scott McGill.


An exciting 20-lap Mini-Stock feature as several drivers exchanged positions. The
leaders Alexis Charbonneau and Danyk Sylvestre led the way as they swapped paint
unfortunately, they got together, and Sebastien Beauregard got the lead. A great ending to
the event as James Clarke was able to surprise Beauregard in the final lap and captures
his first ever win.

The Lavergne family would like to thank everyone for their support in these challenging
times for everyone and hopefully we will be able to return to the speedway soon.