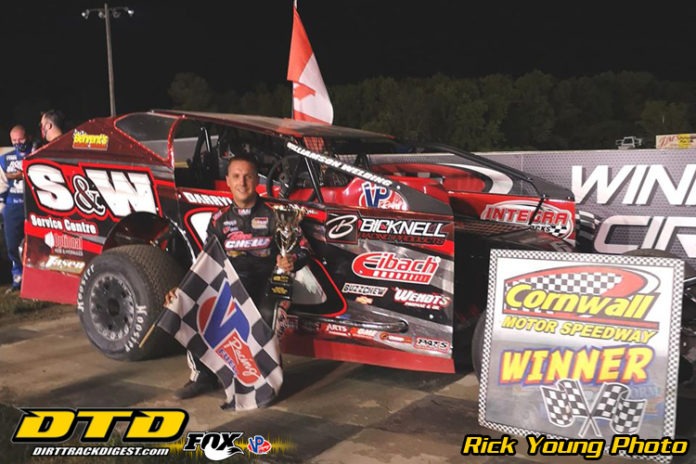 CORNWALL, ON –  A fourth event was presented at the Cornwall Speedway with the Summer Sizzler 50 as the Modifieds, Sportsman, Lightning Sprints and Vintage were in action on Fat Les Chip Stand sponsored night.

A field of 30 car started the Summer Sizzler Modified feature event as Yan Bussiere took the lead over Dalton Slack and Luke Whitteker. Slack used the inside lane to take the lead on Bussiere but both drivers ran side by side. A few cautions slowed the first few laps as Bussiere was able to take the lead on lap 14 with Steve Bernard and Mario Clair following suit. Bernard took the lead on lap 22 as Mat Williamson moved up to second with Bussiere battling with Gary Lindberg. Bernard and Willamson were in heavy traffic and battle went on for the last 15 laps as Williamson was able to pass Bernard with 2 laps to go and won the Summer Sizzler with Lindberg finishing in third.

Jarrett Herbison was on point in the 50-lap Sportsman feature with Xavier Andrews and Jason Rose in the mix. A lap 6 restart saw Gabriel Cyr making some great moves and took the lead over Herbison. Cyr had a solid run with Herbison and Johnathon Ferguson moving up to third. A 6-car accident on lap 19 and red flag was out, everyone was ok. Herbison remained first with Ferguson moving up to second. Caution came on lap 36. On the following green, Herbison in front with Ryan Stabler pulling up to second. Herbison led the final laps and captured his first ever feature at the speedway in front of Stabler and Steve Morris making a late charge.

In the 25-lap Lightning Sprint, Eric Mireault led the way with Michael Benoit and Raphael Nedeirer. A caution came on lap 8. Xavier Lauzon was really quicky on the high side with less than 10 laps to go. Lauzon was strong until the end and wins his second event of the year over Michael Benoit and Karl Letendre.


Randy Gaudet ran a perfect race in the 25-lap Vintage feature that was caution less.

We will announce our next event at the beginning of the week. Please check our social media in the coming days for some announcements.