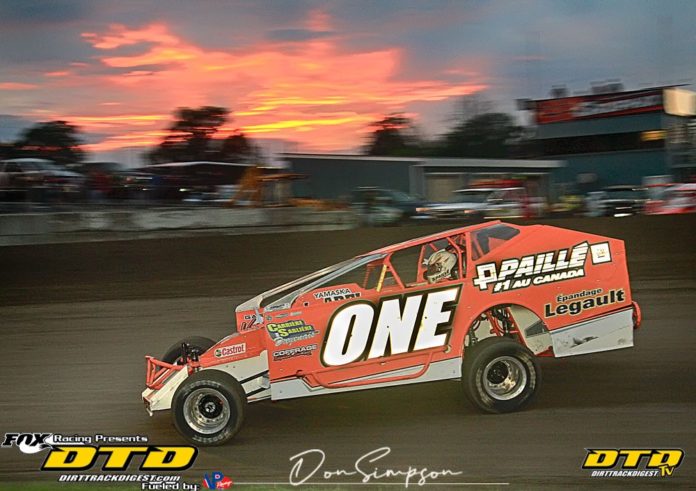 CORNWALL, ONT – Even if Mother Nature tried to throw a curve ball, the second part of the Weekend Double Header was presented with the Modified, Sportsman, Mini-Stock and Vintage in action on Fat Les Chip Stand Brockville Waterfront. The track was bad fast as Joey Ladouceur shattered the 358-Modified track record with a 12.640 time around the Cornwall Motor Speedway.

The 50-lap Modified feature saw a field of 30 cars taking the green with David Hebert jumping to the lead with Luke Whitteker and Dany Gagné in third. Hebert got into lap traffic by lap 10 as the leaders were in these conditions. The caution came on lap 15 for Kevin Hamel. Hebert led 3 more laps as caution was out for Jeffrey Lapalme. On the restart, Brianna Ladouceur used the outside lane to move up to second. A lap 19 restart saw a 3-car tangle in turn 3. Hebert got the lead with Dany Gagné moved to second and Steve Bernier running in third. Gagne found something on the outside and got closer to the leader with Bernier in the mix. Gagne passed Hebert for the lead on lap 29 just as caution was shown for Ryan Arbuthnot. Gagne had a strong ride running the top lane but lap traffic became a factor as Hebert used the inside lane and regained the lead. Gagné lost some ground with 3 to go and gave the second to Bernier. Hebert led the final laps and got the win over Bernier and Brianna Ladouceur completing the podium.

Jarrett Herbison to the lead in the 50-lap Sportsman feature as Robert Delormier and Domenick Merkley was in third. Thomas Cook had a strong ride and took second on Merkley in the first few laps. A good battle for the lead Cook was able to take the lead on Herbison on lap 12 as a multi-car accident occurred on lap 13 but everyone was able to leave under their own power. Cook the leader with some changes in second with Delormier moving up to that position. Cook pulled away from the field with Delormier, Herbison, Ferguson and Stabler the top 5 at halfway point. Caution was out on lap 35 for Dylan Kirkland. On the green, Ferguson had a strong restart and took the lead over Cook and Stabler now in third. Ferguson led the final laps to capture his second win of the season over Cook and Stabler.

Randy Gaudet was the early leader in the 20-lap Vintage feature as he led the first 6 laps when Jason Powers took the lead in lap traffic conditions. Powers had a solid run and captured the event.

The 20-lap Mini-Stock saw Yan Potvin taking the lead over Alexis Charbonneau and Sylvain Charest in third. Caution was out for Mike Gaucher on lap 4. Potvin to the lead on the restart with Charest moving to second as Christian Charbonneau moving up to third. Charest has some issues and gives up his second spot. Potvin had a perfect run winning his first feature of the season

The action continues next week on Sunday, August 16 as it will be a carbon copy of tonight’s program with 50-lap events in Modified, Sportsman plus the Mini-Stock and Vintage in action.