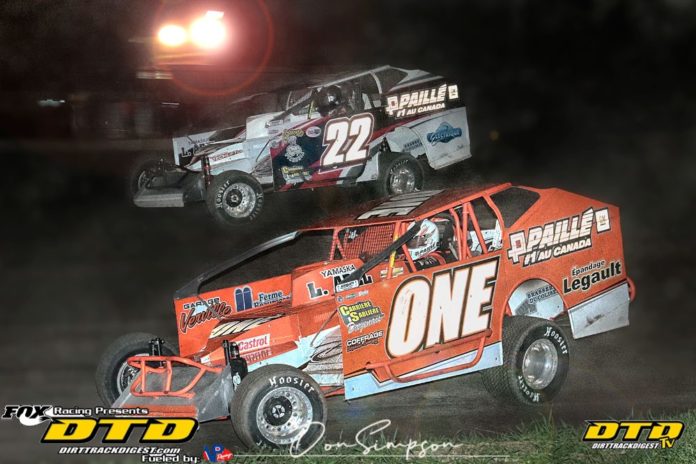 CORNWALL, ONT – Fat Les Chip Stand was back as main sponsor for another great evening of racing at Cornwall Motor Speedway as the Modified and Sportsman each had a 50-lap event along with the Mini-Stock and Vintage. For a second week in a row, Mother Nature threw a few curve balls but the program was able to be run.

Mathieu Desjardins took the early lead in the 50-lap Modified feature as Mario Clair and
David Hebert went into battle for second spot as Mat Williamson moved to fourth with 7
laps in the books. Desjardins moved a little too high and David Hebert took the lead on
the following lap as Clair followed in second with Desjardins fading to sixth as Dalton
Slack brought caution on lap 12. Hebert led the way as Williamson quickly moved to
second with Clair in third. Luke Whitteker moved to third from his 9 th starting position.
Caution was out on lap 27 for Louie Jackson Jr. Hebert strong in front on the following
restart with Corey Wheeler jumping to third. Traffic was a factor with less than 10 laps to
go, Hebert kept his distance from Williamson and went on to capture his second feature
in a row over Williamson and Wheeler completed the podium.


In the 50-lap Sportsman event, Ricky Thompson was the man in charge in front of Kalen
Draper and Billy Cook. While Thompson had a good lead, Thomas Cook moved third
with 10 laps down. Ryan Stabler was on the move with 20 laps in the book as he got to
second and got closer to the leader as he used the top side of the speedway to grab the
lead at halfway point. While Stabler was pulling away from the field, Cedric Gauvreau
took second after a great battle with Thomas Cook and Gab Cyr. The caution came out on
lap 38 for Robert Delormier. On the restart, a great 2-car battle between Stabler and Cyr
for the lead as they ran side by side for a few laps with Gauvreau in third. Stabler was
able to hold off Cyr and won his first feature of the season.

The 15-lap Mini-Stock closed the evening as Mike Gaucher and James Clarke battled for
the lead as Clarke passed Gaucher in the last moments of the event and got his third win
of the year.

Josh Powers to the lead in the 20-lap Vintage feature as Jason Powers moved up to
second as Ryan Comeau was running in third. Josh Powers made no mistake and
captured his second feature win on the season and first in his own ride in front of his dad
Jason Powers


The action continues next week on Sunday, August 23 as with 50-lap events in Modified,
Sportsman plus the Pro-Stock and a 4 th class to be announced in the coming days.