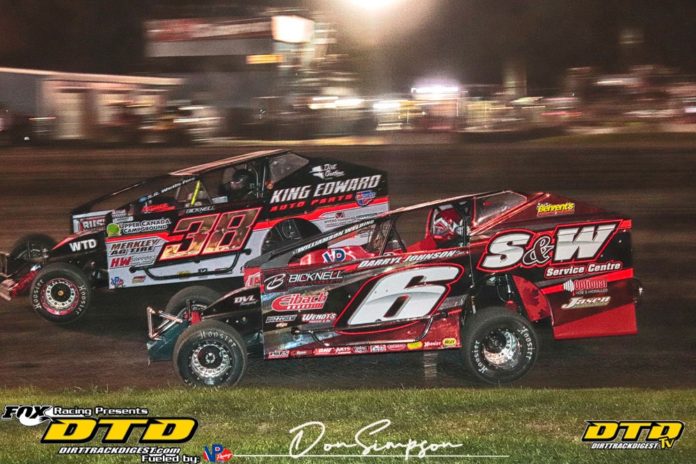 CORNWALL, ONT – Another great night of racing at Cornwall Motor Speedway with the Mohawk Express 50 as we were celebrating the career of Billy Cook. More than 110 cars on hand as the Modifieds, Sportsman, Pro-Stock, Mini-Stock and Vintage saw some action.

Dany Gagné led the field of 31 Modifieds to the lead in the Mohawk Express Modified feature over Yan Bussiere and Mario Clair. The caution was out on lap 6 as Kevin Hamel spun in turn 4. Gagné to the lead with David Hebert jumping to second with Bussiere holding third. Heavy traffic was quickly a factor as Hebert was able to pass Gagné for the lead on lap 16. While Hebert was pulling away in front, Luke Whitteker was on the move as he passed Bussiere and Gagné within 2 laps and got second with 23 laps in the books. Some position shuffling by lap 30 with Clair and Mat Williamson now in the top 5. Caution was back out on lap 33. Good restarts for Hebert with Whitteker and Williamson in the top 3. Hebert had company in Williamson with 10 laps to go. Dalton Slack brought caution on lap 44. A severe crash occurred on lap 46 as Carey Terrance hit the wall hard in the front stretch with Tyler Givogue making a few rollovers and the red flag was displayed, everyone was ok. When the green lights when back on, Williamson challenged Hebert for the lead, he was able to pass Hebert with a turn-4 move and captured his second feature of the season, Hebert finished second with Mike Bowman taking the final step of the podium.

Fire Swamp took the lead in the Mohawk Express Sportsman feature over Jarrett Herbison and Justin Lalancette. On a lap 2 restart, Herbison was the new leader. Herbison to the lead with Cedric Gauvreau in second, Gauvreau used the outside lane and took the lead over Herbison on lap 6. A few cautions occurred in the first dozen laps with Gauvreau still the leader. A lot of action behind the leader as Robert Delormier started to make some noise and passed several cars and challenged the leaders with 15 laps to go, Delormier made the lower part of the track work and passed Gauvreau for the lead on lap 39. Delormier made no mistake and got his first win of the year over Gauvreau and Herbison

Pascal Payeur was the early leader in the 40-lap Pro-Stock feature as Marc Lalonde was in second with Dave Seguin in third. The leaders were in heavy traffic by lap 10. The first caution was out on lap 16. On the restart, Payeur was the leader with Bruno Richard on the move by getting second spot on Lalonde and was charging the leader. Richard used the outside lane and took the lead with only 6 laps to go, Richard never looked back and grabbed his second win of the year at Cornwall.

Alexis Charbonneau had a great run with Mike Gaucher and James Clarke and collected a first win this season in the Mini-Stock over Clarke and Gaucher.

A father and son battle occurred in the 20-lap Vintage as Jason Powers had the best over his son Josh as both drivers pulled away from the field, the two Powers battled hard for the lead in heavy traffic as caution was out on lap 16. The father held on challenges from his son and got his second win of the season.

The action continues next weekend as the Labour Day Bash will be presented with 50-lap features for Modified and Sportsman along with the Lightning Sprints and Mini-Stock in action.