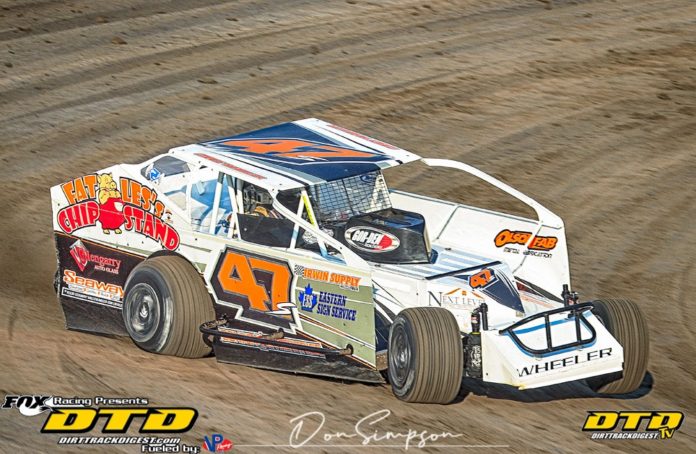 CORNWALL, ON –  The Cornwall Motor Speedway was back in action tonight with 5 classes ready to the battle as the Fat Les Chip Stand Canadian Nationals Series and TAS Racing Sportsman Series started their Fall championship in preparation of the Fall Showdown Weekend. The Pro-Stock, Lightning Sprints and Mini-Stock were also on hand.

Brian McDonald led the way in the 50-lap Canadian Nationals with Corey Wheeler and Kyle Dingwall the top 3. The leader hit heavy traffic by lap 8 as McDonald was the leader as the first caution was out on lap 13. McDonald to the lead with Wheeler right behind him as lot of action was going on for the other top 5 positions with 20 laps in the books. Another 10 laps were completed as Carey Terrance slowed down in the backstretch on lap 30. On the restart, Corey Wheeler took the lead as Dingwall moved to second. McDonald spun in turn 4 as something broke on his ride on lap 34. Wheeler to the lead with Dingwall and Chris Raabe following suit. Wheeler had a scare with 2 laps to go but managed to keep the lead captured round 1 of the Canadian Nationals.

In the TAS Racing Sportsman Series feature, Robert Delormier was the early leader over Johnathon Ferguson and Ryan Stabler.  Caution came on lap 4 as an accident occurred. A good battle for the lead when the green flag flew as Ferguson took the lead over Delormier with Jarrett Herbison moving to third. Ferguson got into heavy traffic with 16 laps done as caution was out on lap 20. A severe accident occurred in front of the grandstand on lap 23, everyone was ok. Ferguson to the lead as Herbison passed Delormier for second on lap 27. Herbison challenged Ferguson for the lead and was able to take the top spot with 34 laps completed. Ferguson used the outside lane and was able to get by Herbison with less than 10 laps to go for the lead. Ferguson never looked back and got the win over Herbison and Delormier.

Pascal Payeur and Bruno Richard were in battle early on in the 30-lap Pro-Stock feature with Payeur taking the lead as Stephane Lebrun was running in third. While Payeur had a solid run in front, Dave Seguin passed Lebrun for third on lap 18. Lap traffic became a factor as Seguin passed Richard for second on lap 24. Payeur made no mistakes and led wire to wire to win his first ever feature in the division at Cornwall.

Mike Gaucher was the leader in the 25-lap Mini-Stock feature as Marc-André Voyer was able to get the lead over Gaucher as both drivers exchanged the top spot on as Gaucher took the lead and pulled away with Alexis Charbonneau and James Clarke moving into the top 3 with 5 laps to go. Gaucher made no errors and won his first feature of the season.

The 23-lap Lightning Sprints feature was the first to be presented as Yannik Poirier took the lead over Karl Letendre and J-C Bolduc, caution was out on lap 4 for Mike Gaucher. Poirier had a solid run as Bolduc moved up to second with Yves Girard landing on his side and red was shown to the field. On the restart, Poirier was in the lead with Bolduc in second. Poirier led the final portion and captured the win.

The Fireball Enduro is already here as it will be a double header under COVID-19 regulations, the Ladies and 4 cylinders will run next Saturday and the 6 cylinders, 8 cylinders and Vans will run on Sunday.