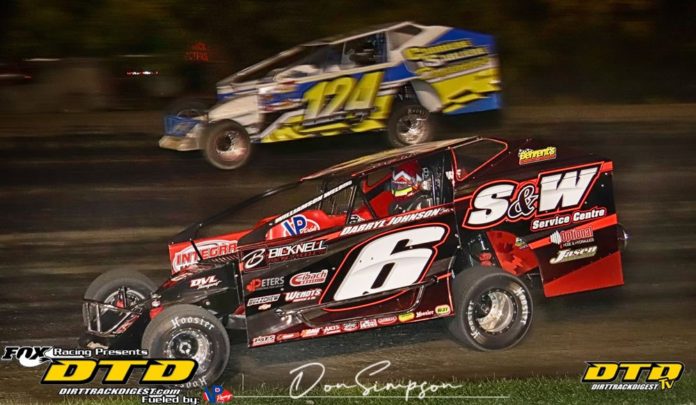 CORNWALL, ON  – The Prelude to the Fall Showdown Weekend was on at Cornwall Motor Speedway with the Canadian Nationals Series and TAS Racing Sportsman Series sharing the spotlight along with the Lightning Sprints, Mini-Stocks and Vintage.

Carey Terrance to the in the 50-lap Fat Les Chip Stand Canadian Nationals event with Mat Williamson in second and Steve Bernier moving to third. Williamson passed Terrance for the lead in turn 2 on lap 12 and pulled away as Bernier got second over Terrance who pulled in the pits on lap 16 giving away his spot. The event quickly got to halfway point with Williamson having a sizeable lead over Bernier and Dingwall. Caution was out on lap 42 for Brian McDonald who had a mechanical failure. On the restart a lot of action behind Williamson as Corey Wheeler moved up to second with Bernier in third. Williamson made no errors and got his third win of the year.

Jordan Poirier grabbed the lead over Stephane St-Laurent on lap 3 of the Lightning Sprint event as Xavier Lauzon made some progress as he took second on lap 6 using the top part of the speedway. Lauzon tried to chase down Poirier as the feature reached halfway point. Karl Letendre brought caution lap 16. Poirier led the way over Lauzon and St-Laurent. Poirier led the final portion to capture his third event of the year.

Randy Gaudet led the way in the 20-lap event as Josh Powers got closer to the leader and passed him in the early portion of the race. Powers never looked behind in caution free event and got his third feature of the year.

In the 20-lap Mini-Stock feature, Sebastien Beauregard led the way as Justin Jodoin was getting closer to the leader, Jodoin was able to pass Beauregard on lap 4 as Alexis Charbonneau started to make some noise moving up to second. A lot of action behind Jodoin as Christopher Cordeau got second over Charbonneau. Red was out with 2 laps to go as Pierre Picard landed on his roof in turn 2. Jodoin wins the event his first of the year.

The Fall Showdown Weekend scheduled on October 9 to 11 is set to close out the 2020 season at the speedway, we are waiting to get green light from the Eastern Ontario Health Unit to move forward with this event, we will keep everyone posted in the coming days.