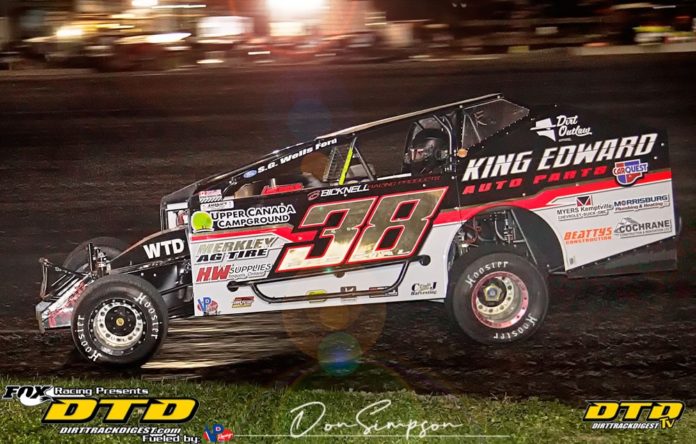 CORNWALL, ON – The first night of the Fall Showdown Weekend was presented at Cornwall Motor Speedway as the 358-Modifieds and Sportsman Modifieds shared the spotlight along with the Pro-Stock and Mini-Stock.

Dalton Slack took the lead in the 50-lap Fat Les Chip Stands Canadian Nationals feature over Luke Whitteker and Kyle Dingwall. Whitteker took the lead on lap 6 using the middle lane as David Hebert got around Dingwall for third. The leaders got into lap traffic with a dozen laps completed. Whitteker kept the lead as Hebert took second in these conditions. The first caution came with 36 laps completed for Carey Terrance. On the restart, Whitteker kept the lead as Corey Wheeler challenged for second but broke and caution came on lap 38. Wheeler was the leader in the Series coming in tonight. Whitteker made no errors and got the feature win over David Hebert and Steve Bernier.

In the TAS Racing Sportsman feature, Gab Cyr took the lead as a lot of action occurred in the first ten laps with Ryan Stabler challenging for the front spot and took it on lap 7. While Stabler led the way, Cyr was in second and Junior Mailhot in third. The feature picked up some momentum as they quickly reached halfway point, caution came on lap 30 for an accident involving the point’s leader Jarrett Herbison. Cyr kept the lead with Stabler second and James Friesen in third. Stabler made a move in the final laps and retook the lead and didn’t let it go to win his first Series feature over Cyr and James Friesen completed the podium.

The 40-lap Pro-Stock was the first feature of the evening as Bruno Cyr took the early as Serge Vallee brought caution on lap 2. On the restart, Stephane Lebrun took the lead with Cyr in second a several drivers were in battle for third. An accident occurred on lap 9. Lebrun to the lead with Bruno Richard moving to second on the following green. While Lebrun led the way, Pascal Payeur found something on the top side of the speedway and past Lebrun on lap 15. Payeur pulled away from the field as Lebrun remained in second with Yves Hamel in third. A few cautions slowed the feature as Richard moved to second and chased the leader. Payeur led the final laps and grabbed the feature win, his second in a row.

Another exciting finish in the 20-lap Mini-Stock feature as James Clarke and Danick Sylvestre had a good battle but Clarke had a great machine and went on to win his 5th feature of the year.

Day 2 of the Fall Showdown Weekend will the 358-Modifieds and Sportsman Modifieds back in acting with the Lightning Sprints and Vintage on the racing card as racing is scheduled to start at 5pm.