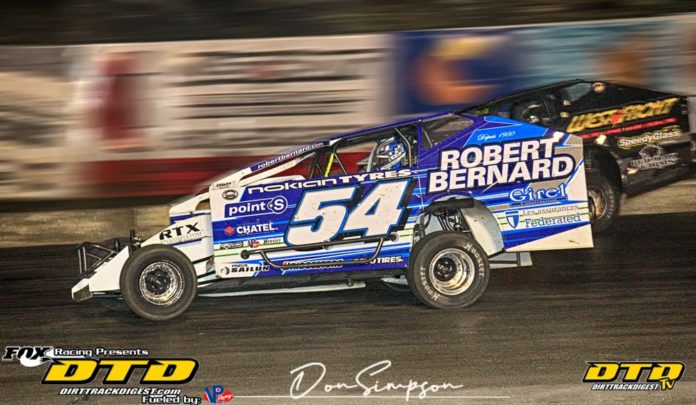 CORNWALL, ONT – The Cornwall Motor Speedway continued their Fall Showdown Weekend with the DIRTcar 358-Modified and DIRTcar Sportsman in action for both Fat Les Chip Stand Canadian Nationals and TAS Racing Sportsman Series along with Lightning Sprints and Vintage.

In the Fat Les Chip Stand Canadian Nationals feature, Steve Bernard took the early lead for a couple of laps until Corey Wheeler used the middle lane to pass Bernard for the top spot with JF Corriveau running in third. Wheeler got in lap traffic by lap 10. Bernard found something on the outside and took the lead on lap 14. Gary Lindberg was able to pass Corriveau for third on lap 18. Bernard pulled away from the field as the feature reached halfway point with Steve Bernier in the mix for a top 5 run. A great event as the leaders ran well in lap traffic conditions as Wheeler tried everything to pass Bernard but the driver of #54 car made no errors and got the win over Wheeler and Gary Lindberg.

Alex Lajoie led the field of 30 drivers to green in the 50-lap TAS Racing Sportsman Series event as Steve Morris brought caution on lap 1. Lajoie to the lead with Johnathon Ferguson moving to second and Robert Delormier in third. Cody McPherson to third on lap 5. Lajoie got into heavy traffic with a dozen laps in as McPherson took second on Ferguson. Caution was out on lap 16. On the restart, McPherson took the lead as James Friesen was on the move as took the lead using the outside lane on lap 20. Friesen led the way as Ferguson was back in contention as he challenged McPherson for second at halfway point. A few cautions came around lap 30 as McPherson was back in the lead with Lajoie in third. Some issues for Lajoie as he let go his third place run on lap 42. On the restart, Friesen won the battle and got his first ever win at Cornwall

Xavier Lauzon wasted no time in the 23-lap Lightning Sprints feature with Tommy Moreau in second. Jean-Christophe Bolduc had a strong car and took the lead over Xavier Lauzon on lap 9. The feature went under 6 minutes as Bolduc finished with a half track lead over Moreau and Jeffrey Weare in third.

Randy Gaudet led the way in the 20-lap Vintage feature as Jason Power was in second with Sheldon Hoogwerf in third. The leaders got into traffic as Power got closer to Gaudet as the leader slid up in turn 4 on lap 13 and Jason Power got the lead as caution came out. On the restart, Gaudet had a strong start and took the lead but Power followed closely. A great finish as Gaudet resisted a last run from Power to get his third win as Kayla Charland got the win in the 50s and 60s sub-division.

Tomorrow is the final day of the Fall Showdown Weekend as the final round of the Fat Les Chip Stand Canadian Nationals and TAS Racing Sportsman Series along with the Lighting Sprints and Mini-Stock. Racing is scheduled to start at 5pm.