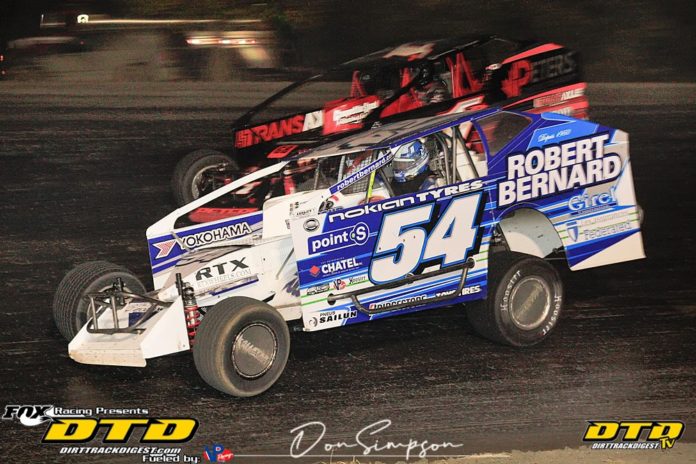 CORNWALL, ONT – The final event of the season was presented for the Fat Les Chip Stand Canadian Nationals with a 125-lap event and TAS Racing Sportsman Series with a 100-lap event, along with the Lightning Sprints and Mini-Stocks.

Dalton Slack took the lead over Martin Pelletier in the 125-lap Fat Les Chip Stand Canadian Nationals with a Corey Wheeler moving to third. Both Slack and Pelletier were runnoing side by side for the lead as they hit lap traffic by lap 12. Slack pulled away as Wheeler passed Pelletier for second on lap 15.  Steve Bernard found something on the outside and moved to second as Slack kept a good distance from the field with 25 laps in the books. The first caution came on lap 58. On the lap 68 restart, Steve Bernard took the lead over Slack as Lindberg moved to third, Slack was back in the lead on lap 77 but had no where to go as he got into some cars in the front stretch and yellow was out and Slack lost his lead. On the following green, Lindberg to the lead as Wheeler passed Bernard for second. Bernard got by Wheeler for that second spot. Lindberg and Bernard made contact while racing for the lead with Bernard to the lead and Wheeler in second but Lindberg charged back for second as Bernard pulled away. Bernard went on to win his second feature of the weekend over Lindberg and Wheeler who got the 2020 Fat Les Chip Stand Canadian Nationals championship.

Cody McPherson to the lead in the 100-lap TAS Racing Sportsman feature over Ryan Stabler and James Friesen, the first 11 laps went down quickly when Billy Cook and Jason Rose got together in the backstretch and Cook rolled over hard and red flag was out, everyone was ok. McPherson to the lead with no change in the top 3. The leaders got into lap traffic as young 14-years old got into the top 5 on lap 35 after starting in the 12th spot. The leaders were in the lap traffic as McPherson kept distance from Stabler and Friesen as Gilles Godard brought the caution on lap 63. McPherson to the lead as Stabler kept second with Johnathon Ferguson to third. Stabler was on the back bumper of the leader with 10 laps to go. Stabler made a final try but McPherson held off and captured his first ever win at Cornwall. With his fourth place finish, Ferguson go his third TAS Racing Sportsman Series championship.

Yanick Poirier led the 23-lap Lightning Sprints to the lead over Michael Benoit and Tommy Moreau, Poirier pulled from the field as Benoit held off Moreau as they quickly got to 10 laps completed. Benoit had some issues at halfway point and let go his 2nd spot and caution was out on lap 12. Poirier back in the lead on the restart as Jeffrey Weare was up to third. Jean-Christophe Bolduc found something in the final laps and moved to second but Yannick Poirier was too strong and got the win.

The 25-lap Mini-Stock feature saw 21 cars to the green with James Clarke taking a commanding lead over Alexis Charbonneau and Mathieu Voghell in third. While Clarke was alone in front, a good battle was going for second with Voghell and Charbonneau. Clarke got into heavy traffic as Brandon McMillian brought the caution on lap 19. On the green, Clarke pulled away with Justin Jodoin moving to second with Sebastien Beauregard in third. Clarke led the final laps to win his 6th event this season.

The father and son duo of Josh and Jason Power were in the lead in the 20-lap Vintage feature with Randy Gaudet in the mix. Gaudet passed Jason Powers for second with less than 10 laps to go in the traffic. Powers had solid run and got the win. Pat Chartrand won the 50 & 60s feature.

This completed the 2020 season and the Lavergne family would like to thank the fans, sponsors and race teams for all the support during these difficult times under COVID-19. We will see you in 2021 !