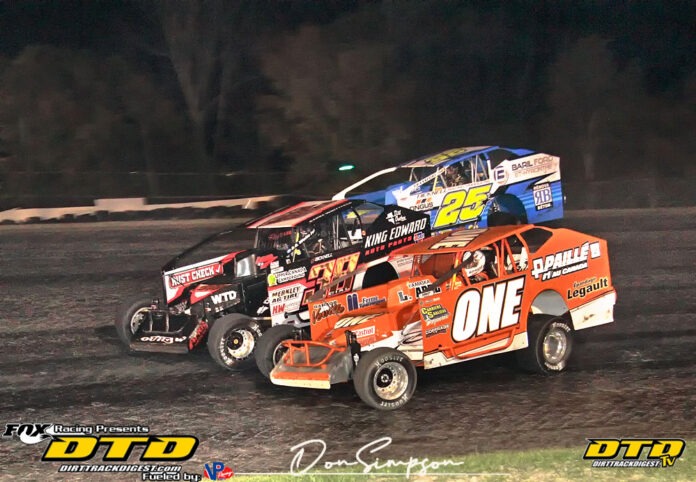 CORNWALL, ONT – After a successful practice session last Sunday, the Cornwall Motor Speedway will finally open their doors this coming weekend with the Back to the Track Super Weekend presented by Remorquage du Plateau with a doubleheader to kick start 2021 in a great way!

Presenting a 2-day event has spark a lot of interest not only from our local drivers but also from several invaders. Mat Williamson who already has already 4 wins to his credit in 2021 will be looking to add a fifth one as he planned to race in both the 40-lap event on Saturday and 50-lap on Sunday. Teammates David Hebert and Mario Clair will be on hand as well as they had some success last year at Cornwall as they both visited the winners circle. Mike Bowman, Yan Bussière, Mathieu Desjardins, Paul St-Sauveur are amongst the other that already confirmed their presence.

The regulars will want to defend their own turf as Corey Wheeler, Luke Whitteker, Kyle Dingwall, Carey Terrance, Steve Bernier, Brian McDonald, JF Corriveau, Joey Ladouceur, Brian McDonald, Shane Pecore, Brianna Ladouceur and many others will all contend for the 2021 track championship. Let’s not count out Gage Morin who is making a return to competition this season, a solid field of cars is expected for both events.

In the Next Level Home Improvement Sportsman, Ryan Stabler will be one of the favourites to win the championship but there are many contenders that will want the title as well and this includes Justin Lalancette, Jarrett Herbison, Johnathan Ferguson, Thomas Cook, Jessica Power, Gabriel Cyr, Cedric Gauvreau, Scott McGill, Tyler Givogue and CD Beauchamp. The Sportsman will run 30-lap features on both nights.

Defending track champion in the Alexandria Home Hardware Pro-Stock division, Stephane Lebrun will have his hands full as the division is looking really promising in 2021, Bruno Richard will likely be one the big challengers as he already has 1 win this year. You can count on Marc Lalonde, Dave Seguin, Dave Bissonnette, Rock Aubin and Eric Jean-Louis as well to be contenders. We expect several invaders from Quebec for this 25-lap race that will be presented on the Saturday evening portion.

The Mini-Stock division brought several well prepared cars at the practice session last Sunday and things are looking very good for them, James Clarke was the man to beat last season but we can expect to have some great competition from Justin Jodoin, Skylar Ladouceur, Brandon MacMillan, Francois Belair, Marc-Andre Voyer, Alexis Charbonneau and several others. Both nights will be 20-lap affairs for them.

The 417 Bus Lines Lightning Sprints will be part of the Sunday portion with a 25-lap feature, Cornwall being a popular venue for the drivers, we can expect nearly 20 cars in attendance.

We remind that we are currently in step 1 of the reopening plan in Ontario and unfortunately, spectators are not allowed until step 2. You will be able to see some videos, photos and results, on our Facebook page on both nights.