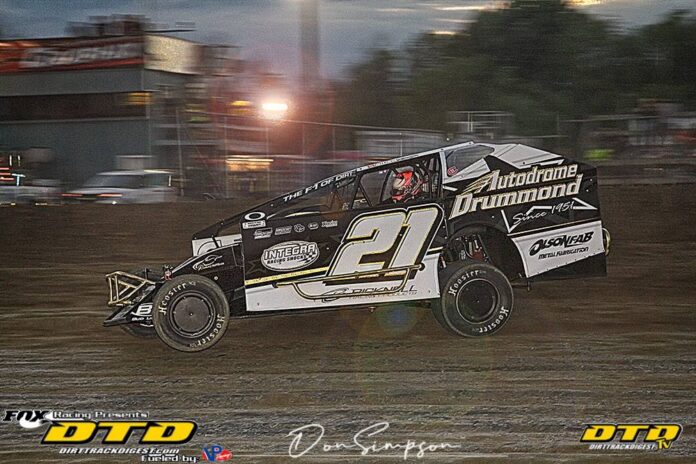 Yan Bussiere to the early lead in the 40-lap Modified feature as Kyle Dingwall took the second spot and Louie Jackson in third. The first 16 laps are done quickly as caution came out for Lee Ladouceur. Bussiere got challenged by Dingwall in the first few laps but was able to pull away from the field with the feature hitting halfway point. Bussiere had a sizeable lead with Corey Wheeler getting closer to Dingwall for second. Wheeler took second and got closer to the leader with 5 laps to go. Bussiere never looked back and won the feature, his first win of the season.

Bobby Herrington was the early leader in the 30-lap Sportsman feature with Thomas Cook and Ryan Stabler in the mix. While Herrington pulled away, a good battle for second as Stabler passed Cook on lap 6. The feature ran quickly as Stabler had company with Jarrett Herbison who made a late push. Herrington made no errors in this caution less feature and grabbed the win.

In the 25-lap Pro-Stock feature, some good action in the first portion as Marc Lalonde, Dave Seguin and Bruno Richard fought for the lead. On the restart, Lalonde and Richard raced for the lead and got together and both drivers had to go to the pits giving the lead to Seguin. The rest of the feature ran quickly with Seguin taking the win over Stephane Lebrun and Steve Chaput.

The 15-lap Novice Sportsman saw a red flag on the initial start for a good accident in the front stretch. George Brinklow sustained heavy damage. On the restart, Eric Loyer took the lead and led the whole way to capture his second win this weekend.

In the 20-lap Mini-Stock feature, Brandon MacMillan to the lead as James Clarke quickly jumped to second with Kyle Gregory in third with the first yellow on lap 3. MacMillan had issues and gave the lead to Clarke on that same yellow. On the restart, Alexis Charbonneau was able to pass Clarke with Pierre Picard running in third. Charbonneau was able to resist to charges from Clarke and got his first feature win of 2021.

With Ontario moving to step 2 of the reopening plan, we will be able to have 25% capacity in our grandstand. We will announce our schedule for the upcoming weeks early this week.