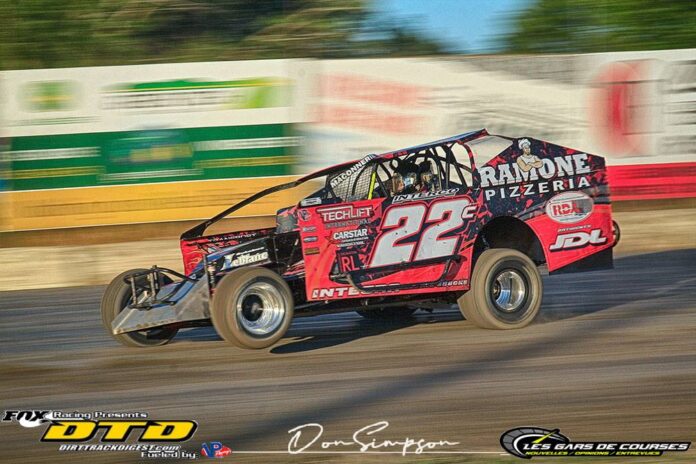 CORNWALL, ON – Cornwall Motor Speedway welcomed fans back with the Fat Les Chip Stand Canadian Nationals and Race for the Cure Series along with the Vintage, Mini-Stock and Novice Sportsman.

Chris Raabe to the lead in the Fat Les Chip Canadian Nationals feature event with JF Corriveau in second and Steve Bernier in third. Caution came on lap 4. Raabe to the lead with JF Corriveau and Louie Jackson moving to third. Raabe joined heavy traffic on lap 13. Raabe had a good pace as Louie Jackson jr. moved up to second. Yellow came on the 19th lap. On the restart, Raabe has issues and gives the lead to Mario Clair as caution was back with 21 laps down. Clair the leader as defending series champion, Corey Wheeler was charging to the front as took second on lap 25. Clair back in front of Wheeler and Gage Morin moving up to third after starting 17th. Several battles were occurring behind the leader with Wheeler fending off charges from Jackson. Dalton Slack hits the wall in turn 4 and yellow was out on lap 41. Clair was still the leader as Louie Jackson got second from Wheeler using the very bottom of the track. Jackson got caught with lap traffic and Wheeler passed him. Clair led the final laps and captured the first round of the Canadian Nationals.

In the Race for the Cure Sportsman feature, Brent Kelsey was the early leader with Tyler Givogue in second and Scott McGill in third. Givogue used the high lane and took the lead on lap 12. Cedric Gauvreau was on the move as well made his way to second spot. A competition caution was given on lap 20 with a fan drawing the number 3 putting Ryan Stabler on the lead. On the restart, Gauvreau charged to the lead with Gilles Godard in third. Both Gauvreau and Stabler raced side by side and Stabler took the front spot at halfway point. Stabler moved away from the field as Cody McPherson jumped to third with 15 laps to go and had eyes on the leaders. Caution was out with only 4 laps to go. Stabler remained first and grabbed the feature win over Gauvreau and McPherson.

Randy Gaudet and Josh Powers gave a great show in the 20-lap vintage feature as both drivers were the class of the field with Gaudet getting the win.

A pair of former go kart racers swapped the lead in the 15-lap Novice feature with Tristan Ladouceur the early lead as Justin Cyr was able to pass Ladouceur on lap 7. Cyr and Ladouceur got together on the restart and Blayden Arquiette was the winner.

Brandon McMillan to the lead in the 20-lap Mini-Stock feature with Jeremie Goyette in second and James Clarke in third. The front 3 were racing together as we had a good battle for second. Clarke found something on the bottom and got the lead on lap 11. Clarke never looked back and captured his third feature in 4 events so far this season at the speedway.

Action is back next week with the Weekend Warriors Mini-Stock Series and the visit of the Midget SpeedSTR along with a full program in all regular divisions.