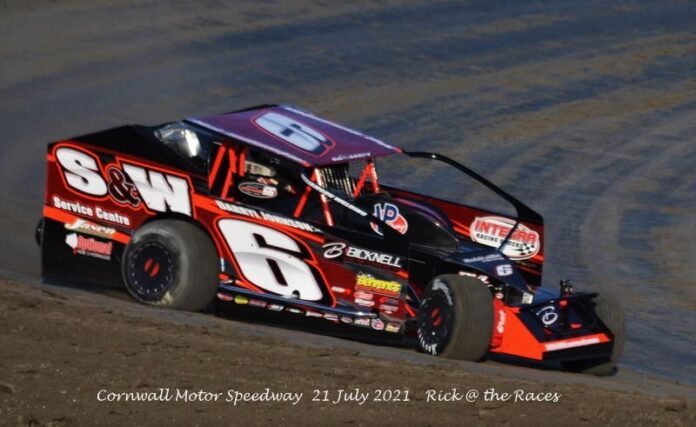 CORNWALL, ONT – Racing was back with one of the biggest event of the year as the Canadian Big Block Series was on hand with a 75-lap event paying $3,000 to the winner, nearly 30 cars were in attendance. The Sportsman, Novice Sportsman and Mini-Stock were also being on hand.

Carey Terrance took the lead in the Ramone Pizzeria Big Block Series as Gage Morin and David Hebert were behind the leader. Terrance got into lap traffic by lap 10. Corey Wheeler moved to second on lap 12 as Hebert remained third. The first 20 laps went quickly as Mat Williamson made his way in the top 4. The first caution came out on lap 36 as JF Corriveau stopped in turn 1. On the restart, Wheeler challenged Terrance for the lead but the 66x car stayed first as Williamson moved to third. Yellow was out on lap 43 as Yan Bussiere made a stop in turn 2. Terrance to the lead as Williamson gained another position moving to second. Williamson reeled in the leader with 25 laps to go. Shane Pecore started to make some noise as he challenged Wheeler for third on lap 57. Williamson made a move on Terrance coming out of turn 4 and got the lead with less than 15 to go. Pecore was able to clear Wheeler for third. Williamson led the final laps and got the win over Carey Terrance and Shane Pecore.

Jason Rose to the lead in the 32-lap Sportsman feature as caution came out on lap 3. Rose had a good car but Gilles Godard started to challenge him using the top lane as Samuel Charland moved to third. An accident occurred on lap 8. Rose to the lead with Godard on his bumper as William Racine was in third. The leaders got into lap traffic with 20 laps down. Jarrett Herbison made quite a move as he used the bottom and surprised the top 3 and took the lead with 22 laps in. Herbison got a good jump as Godard remained second. Herbison never looked back and got his first feature of the season.

In the 20-lap Mini-Stock feature, Kevin Sabourin took the early lead over Dan Cook and Alexis Charbonneau. Cook passed Sabourin for the lead on lap 5. A lap 6 restart, saw Cook in the lead with Brandon McMillan moving up to second. Cook never looked back and captured a first win this season at Cornwall in his new ride over Alexis Charbonneau who rallied second.

Eric Loyer took the lead in the 15-lap Remorquage du Plateau Novice Sportsman feature over Justin Cyr and Tristan Ladouceur. A restart, was what Cyr needed to pass Eric Loyer as both drivers were battling together and Cyr had the best by winning his second feature in a row.

The busy week of racing at Cornwall will conclude this coming Sunday with the Dash for Cash night as with 6 classes in action including our 5 regular divisions and the Lightning Sprints making their third visit.