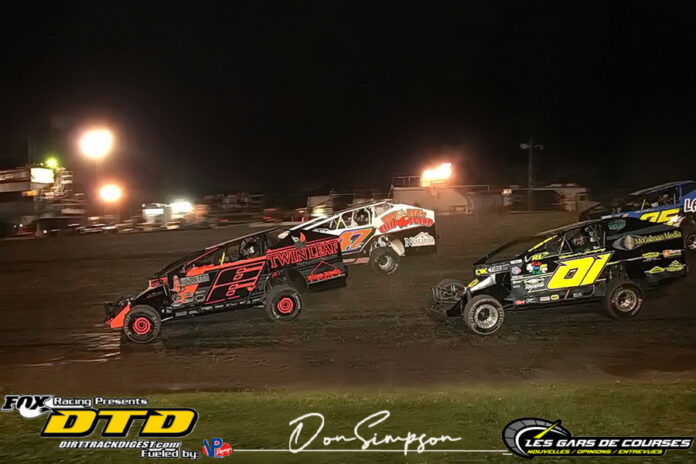 CORNWALL, ONT – A very busy night at Cornwall as all regular classes were in action along with Dash for Cash in all categories as the Lightning Sprints were also in town.

Dany Gagne to the lead in the 40-lap Modified feature as caution was out on lap 1 for Tristan Draper. Gagne the leader with Corey Wheeler and Kyle Dingwall behind him. Gagne had company in first with Wheeler as Carey Terrance moved third. Wheeler slipped by Gagne on lap 15 as Terrance was racing closely to Gagne and passed him at halfway point. Caution was out on lap 22. On the restart, Terrance powered by Wheeler for the lead. Terrance built himself a sizeable lead over the field as Dingwall stop in turn 2 with 6 laps to go. Terrance the leader as Chris Raabe made a good move to take second on Wheeler. Terrance got the winner over Chris Raabe and Steve Bernier rallied the podium.

Tyler Stewart in command in the 32-lap Sportsman feature as caution came out on lap 2. A red flag occurred on lap 3 as Dale Gifford flipped on his side in turn 2. On the restart, Givogue to the lead as William Racine flipped hard in the backstretch and a second red was displayed. Givogue remained in front as Stewart was still second as Ryan Stabler was pressuring Ricky Thompson for third. A lap 9 restart saw Stabler moving to second and set his eyes on the leader. Caution was out on lap 18 for 2 cars getting tangled together. On the restart, Stabler used the outside lane and captured the lead on Givogue. Stabler pulled away from the field and went on to capture his third feature of the year.

Dave Seguin in the lead of the 25-lap Pro-Stock feature as Bruno Cyr found something on the top side and got the lead on lap 5 over Seguin. A good battle for the lead as both Cyr and Seguin swapped the top spot for a few laps but Cyr had a very strong car and remained in front. Cyr was the class of the field and got his first win in 2021.

Some early action in the 25-lap Lightning Sprints feature as Simon Jacques was the initial leader but got passed by Jean-Christophe Bolduc as Jacques faded to fourth. Yellow was out on lap 10. Jordan Poirier to the lead on the restart, as Stephane St-Laurent challenged Bolduc for second as he was able to pass him just before the yellow lights appeared on lap 16. Poirier and St-Laurent raced side by side for a few laps with Poirier pulling away and went on to get his second win in a row at Cornwall.

One of the biggest event of the season will be done next week as the second round of the Fat Les Chip Stand Canadian Nationals and Race for the Cure Sportsman Series will be in action along with a special 35-lap Street Stock feature with the Mini-Stock and Novice Sportsman also on hand.