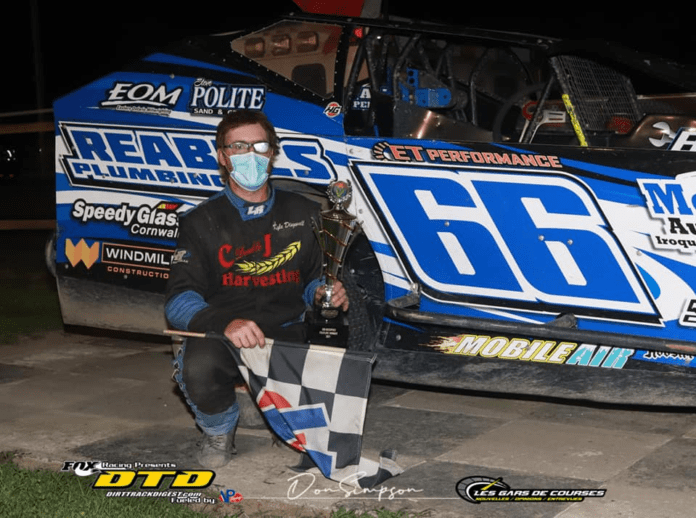 CORNWALL, ONT – Next Level Home Improvement presented the second rounds of the Weekend Warriors Pro-Stock and Mini-Stock Series along with the Quebec Mini-Mods, Modifieds and Sportsman.

Lee Ladouceur took the lead in the 40-lap Modified feature as Luke Whitteker and Kyle Dingwall were in the top 3. Whitteker was on the backbumper of Ladouceur who protected the lead for the first 29 laps as Whitteker was able to get the lead after Ladouceur went a little too high in turn 2. Whitteker had the car to beat but Dingwall had other things in mind as he surprised Whitteker for the lead. The event was completed in less than 10 minutes.

Pascal Payeur was the early leader in the Weekend Warriors Pro-Stock feature as he swapped the lead with Bruno Richard as caution came out on lap 2. Payeur back in the lead with Richard and Stephane Lebrun in third. Caution was back on lap 8 for an accident in turn 2. Payeur the leader with Richard in second but he lost some ground on lap 12 as Voghel and Denis Gauvreau passed him. Payeur still the leader as Dave Seguin was on the move as he took second on Voghel with 17 laps completed. Some good battles behind the leader as Seguin, Richard and Voghel were in battle for a spot on the podium. Caution was out on lap 27. Payeur had company in Richard for the lead with 7 laps left to go but Payeur pulled away and captured his second feature in the series.

In the 32-lap Next Level Home Improvement Sportsman, Tyler Givogue was the leader over Ricky Thompson and Cedric Gauvreau. Thompson found something on the top lane and got the lead on lap 7 as Samuel Charland moved to third. Charland had a quick ride as he took the lead over the Thompson with 10 laps in the books. Charland in the lead with a lot of movement behind the leader with less than 15 laps to go. Charland had William Racine as a dancing partner on lap 25, Racine used the top lane to get the top spot as Ryan Stabler was now in third after starting 20th. Racine led the final laps and captured his first feature at Cornwall.

In the 25-lap CJs Auto Weekend Warriors Mini-Stock Series, Kevin Sabourin took the early lead with Alexis Charbonneau moving up to second on lap 4 as Pierre Picard was sitting in third. Sabourin slowed a bit in the backstretch and Charbonneau took the lead on lap 11. Charbonneau pulled away from the field as the event was slowed on lap 21. Charbonneau led the final laps and captured the feature over Picard.

Jonathan Lapolice was dominant in the 20-lap Mini-Modified feature as led the whole caution less event in their lone presence at the speedway.

A big event next Sunday as the second round of the Race for the Cure Sportsman Series will be presented along with the Northeast Late Model Alliance in town. The Street Stock will also be on the card with the Modifieds and Novice Sportsman having 2 features on another busy night at Cornwall.