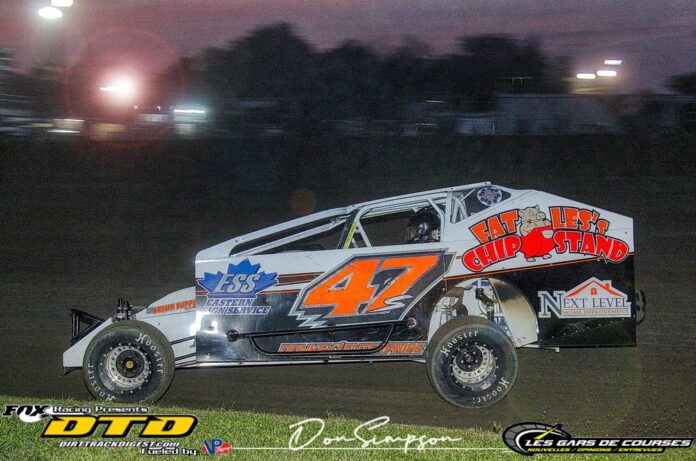 By CORNWALL, ONT – Archers Poultry presented a diverse night of racing as Cornwall Motor Speedway has 3 special events combined in the same night of racing this Sunday evening, with the Race for the Cure Sportsman Series, the Northeast Late Model Alliance and an invitational Street Stock event along with double features for Novice Sportsman and the 358-Modifieds. 117 cars in total attempted to qualify.

In the 50-lap Race for the Cure Sportsman feature, Gabriel Cyr to the lead over Ryan Stabler and Tyler Givogue. A few cautions slowed the feature with an accident in turn 2 on lap 4. Cyr the leader with Stabler putting pressure with 10 laps down. The leaders were in heavy traffic by halfway point as the feature picked up a good momentum. Traffic was a factor as Stabler got by Cyr in these conditions just before yellow was out on lap 33. On the restart, Cyr grabbed the lead over Stabler with Cody McPherson making his way in the top 3. Stabler moved back in front on lap 37 and pulled away with 10 laps to go. Stabler remained perfect in the Series by winning both events over Cyr and McPherson.

Corey Wheeler to the lead in the 40-lap 358-Modified feature over Lance Willix and Kevin Hamel. Several position changes behind the top 3 as the feature got to the halfway point quickly. Leaders were in heavy traffic as Willix challenged Wheeler for the lead in the final laps as Carey Terrance was running in third. Wheeler led the caution free feature from start to finish to get his first win of 2021 over Willix and Terrance.

In the 35-Lap Northeast Late Model Alliance feature, Adam Turner was the class of the field early on with Austin King following closely. Leaders got closer to the lap cars as Turner spun in turn 4 on lap 10 losing the lead and bringing the caution. On the restart, Nathan Rinaldi spun in turn 1 and brought several cars in the process and the red was out, everyone was able to get back to racing. On the restart, Hennessy to the lead with King and Kraig Handley in third. Hennessy to the lead as Charlie Sandercock found something on the top and moved to second with 5 laps to go. Hennessy captured the win, his second of the weekend in the series.

Ron Wadforth took the early lead in the 35-lap Street Stock feature over Brock Gregory and Doug Anderson. The top 3 got close to lap traffic as caution was out lap 9. A lot of action on the restart with Tyler French moving to the lead over Doug Anderson and Olivier Boissonneault in third. French had some issues with his car and brought the yellow giving the lead over Boissonneault. A few caution slowed the field with Boissonneault leading the way with Todd Raabe moving to second. Boissonneault fend off a hard charging Raabe and captured the win.


Greg Brinklow was the early leader in the Remorquage du Plateau Novice Sportsman feature as he led the first 7 laps but got passed by Tristan Ladouceur getting the lead and moving away and went to capture his second win this season.

Justin Cyr to the lead in the 15-lap Novice Sportsman remake from July 25. Cyr was dominant in the caution less event with Tristan Ladouceur and Eric Loyer completed the top 3.

The Action Sprint Tour will highlight the next program at Cornwall as the Modifieds, Sportsman, Pro-Stock and Lightning Sprints will also be in town.