CORNWALL, ON – A lot on the line for our drivers this coming Sunday evening at Cornwall Motor Speedway as Rutters Elevators will host our 4 local series along with the end of the championship in our regular season. A busy and important evening of racing as the Fat Les Chip Stand Canadian Nationals, Race for the Cure Sportsman, Weekend Warriors Pro-Stock and Mini-Stock Series are all in action along with crowning our 5 divisional champions, several of our drivers will have their mindset of two different championships.

With the Fat Les Chip Stand Canadian Nationals running the 2nd of 3 rounds, the focus will be on the track championship. The invaders in town for the 125-lap event that will pay $5,000 to win will complicate things a bit for our local runners. The championship race is coming down to the wire as defending champion Corey Wheeler has a 7-point lead over Carey Terrance and 21 points on Kyle Dingwall. Consistent run and no bad luck will be key for these 3 drivers. While Wheeler and Dingwall are looking a second title at Cornwall, Terrance could add to the history books by becoming the first driver to win 5 championships in the Modified division.

Similar to the Modifieds, the Race for the Cure Sportsman Series will not conclude this weekend having a fourth event during the Fall Showdown, Ryan Stabler has a 21-point lead over Cody McPherson in the series while Cedric Gauvreau is 26 points away from Stabler. In the track championship, Stabler only needs to collect 1 point in his heat race and will be crowned the 2021 champion, he enters Sunday with a 65-point lead over Gauvreau while Gabriel Cyr is sitting in third. A very healthy field of cars is expected for the 50-lap event.

The Weekend Warriors will crown the 2021 champion this Sunday, being the most lucrative Pro-Srock Series with a $4,000 points funds as Pascal Payeur will want the lion’s share of it as he leads by 20 points over Bruno Richard and 31 points over Bruno Cyr. Payeur is the man to beat in the series having won both events. Stepping away from racing after this season, Dave Seguin could leave in a great way as he leads the Pro-Stock championship by 23 points over Marc Lalonde and 26 points over Stephane Lebrun. The Series attracted a solid field of cars this season with over 18 cars per event, a 40-lap feature is on the schedule.

Justin Jodoin is aiming for possibly 2 championships this weekend as he leads the local championship by 18 points over Alexis Charbonneau but he has an 18 point deficit on Pierre Picard in the CJ’s Auto Weekend Warriors Series. A 25-lap event is on the card to close the regular season for our Mini-Stocks.

History in the making in the Remorquage du Plateau Novice Sportsman ?

Having an 18 point advantage on Eric Loyer, 3rd generation driver Tristan Ladouceur could add to the championship list in the Ladouceur family with grandfather Laurent, father Joey and uncle Lee. The division was well supported throughout the year and we expect a solid field of cars for the 25-lap event.

We remind everyone that we are starting earlier this Sunday with a start time of 6pm, pit gates will open at 2:30pm, general admission at 4:30pm and time trials at 5:30pm. General admission prices are $30 for adults, kids between 6 and 17 is 5$ and free for kids 5 years old and under. Pit admission price is set at $40. 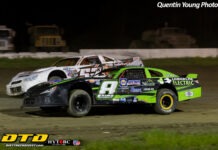