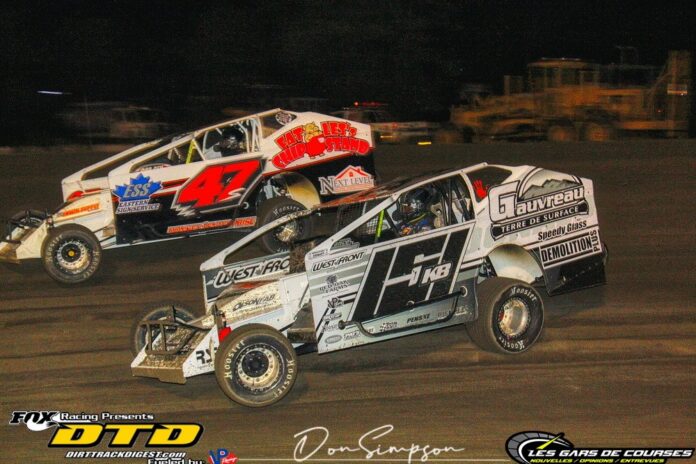 CORNWALL, ON – A lot on the line for our drivers tonight at Cornwall Motor Speedway as Rutters Elevators hosted our 4 local series along with the end of the championship in our regular season. A busy and important evening of racing as the Fat Les Chip Stand Canadian Nationals, Race for the Cure Sportsman, Weekend Warriors Pro-Stock and Mini-Stock Series were all in action along with crowning our 5 divisional champions.

In the 125-lap Fat Les Chip Stand Canadian Nationals, a few cautions slowed the first 10 laps as Corey Wheeler and Mario Clair swapped the top spot as Clair headed to the pits on lap 10. Wheeler to the lead as Brian McDonald was quick and took the lead on lap 14. McDonald was quick on the restart as he took a sizeable lead over Wheeler heading into traffic with 32 laps in the books. Caution was out on lap 37. McDonald had a stout ride taking another commanding lead as Yan Bussiere came to a stop in turn 4 on lap 48. McDonald back in front with Luke Whitteker in second over Wheeler. A lap 61 restart gave a good restart as Whitteker challenged McDonald for the lead as Chris Raabe was now running in third. McDonald managed to pull away from the field with 70 laps in the books. McDonald still in the lead as Raabe pulled in the pits on lap 83. Caution was out on lap 85 for Carey Terrance. McDonald led 7 more laps as Brianna Ladouceur slowed in the backstretch on lap 92. McDonald remained first with Dingwall moving to third. David Hebert slowed in the backstretch and caution was out on lap 101. On the restart, Wheeler and Dingwall got together and Wheeler broke something in front and caution was out on lap 103. McDonald and Whitteker in battle for the lead as several cautions slowed the final portion. A red lap occurred on lap 112 as Carey Terrance landed on his roof ending his chances at the championship. McDonald led the final laps and got his first ever Fat Les Chip Canadian Nationals feature and Corey Wheeler salvaged his car and got his second championship in a row.

Mathieu Laramée to the lead in the 50-lap Race for the Cure Sportsman feature as Justin Desrosiers was in second and Derek Cryderman in third. Caution was out on lap 7 for Fire Swamp and Jessica Power. Laramée in front has Ryan Stabler moved to third as caution came back on lap 12. Laramée had a strong showing in front as Gab Cyr moved to second after starting in eight as the feature hit the halfway point. Laramée in front with Cyr second as Morris had company in Cedric Gauvreau for fourth with 15 laps to go. The traffic became a factor at the end as Cyr got on the backbumper of Laramée but Laramée resisted and got his first win in the Race for the Cure Series. Ryan Stabler is crowned the 2021 Next Level Home Improvement Sportsman Champion.

Marc Lalonde to the lead in the Weekend Warriors Pro-Stock series with Bruno Cyr and Rock Aubin. Point’s leader Dave Seguin rolled over in the backstretch and red was out, Seguin was ok and he rejoined the field. Lalonde back in front as Eric Jean-Louis slowed in turn 4 and yellow was out on lap 8. Lalonde in front with Aubin in second as a few cautions slow the event with 10 laps down. Lalonde had a new dancing partner in Bruno Richard as he challenged Lalonde as caution came out on lap 18. The top 2 drivers got together with Lalonde heading to the pits and Richard losing 2 positions for rough driving. On the restart Stephane Lebrun to the lead. Lebrun jumped to the lead with Denis Gauvreau moving to second. A lot of action as the top spot changed on a few occasions with Richard back in the lead with Jocelyn Roy in second. Richard led the final portion and got his second win of the season, enough to get the Weekend Warriors Pro-Stock Series. Seguin was crowned the 2021 champion.


Marc Dagenais was the early leader in the 25-lap CJs Auto Weekend Warriors Mini-Stock as Dan Cook and Travis Lamarche. Dagenais saw his lead vanished as he had issues on lap 14. Skylar Ladouceur the lead on the following green with Pierre Picard in second. Ladouceur led the final laps and grabbed his first feature as Alexis Charbonneau was crowned the 2021 champion and Pierre Picard the CJs Auto Weekend Warriors Series champion.

This wraps up our regular season at the speedway, our next event will our Fireball Enduro presented on Saturday, September 18 and 19. It will be a weekend of entertainment for the whole family. 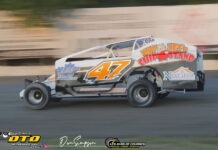 Seven Champions to be Crowned this Weekend at Cornwall 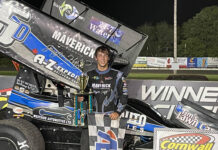 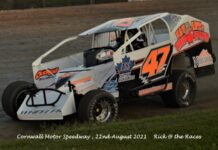 Corey Wheeler Wins 2nd In A Row At Cornwall