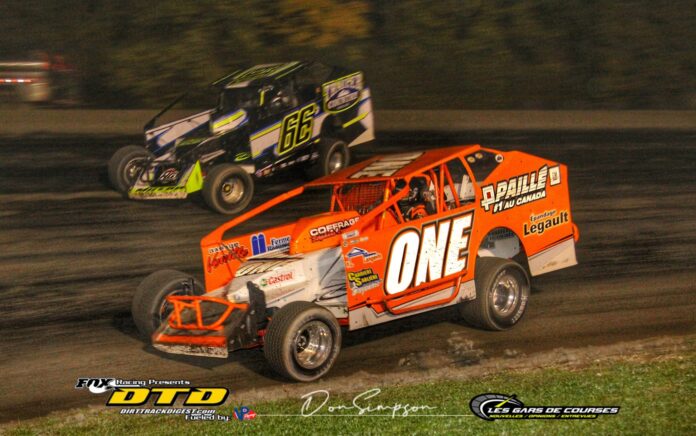 CORNWALL, ONT – A very busy evening on night #1 of the Fall Showdown Weekend presented by King Edward Auto Parts and DIRT Outlaw Apparel. A record breaking evening as well with 66 Sportsman in attendance and more than 170 registered on Coop Embrun.

David Hebert was a man on a mission in the St.Lawrence Radiology 358-Modified event as he took the lead on lap 12 from his 8th starting spot and was never challenged for the rest of the 50-lap event. Some good battles for the other spots in the top 5 throughout the event as Corey Wheeler came in second in front of Luke Whitteker, Mario Clair and Kyle Dingwall. A total of 46 cars registered for the first night.

Bad luck is now over for Brad Rouse in the Gauvreau Transport Sportsman feature, he got the lead on lap 15 and never looked back. Similar to the modifieds, a lot of positions changes in the top 5 with Bobby Herrington being the second place holder over Steve Turcotte, Cody McPherson and Ryan Stabler.

Jeff May had another strong run over 20 competitors in the 20-lap Mod-Lite feature event, May finished in front Steve Comeau and Alex Fortier.

Another epic battle in the Vintage feature between Randy Gaudet and Josh Powers, it was Gaudet that came on top in the feature.

Alexis Charbonneau had a little bit of luck during the 25-lap Mini-Stock feature taking the lead at halfway point then losing it to Tommy Bailey on the final restart but Bailey broke on the final lap giving the win to Charbonnneau, our 2021 track champion.

Action resumes tomorrow night with Modifieds, Sportsman, Pro-Stock, Lightning Sprints and Mod-Lite, pit gates will open at 9am with the general admission opening at 3pm and racing starting at 5pm.