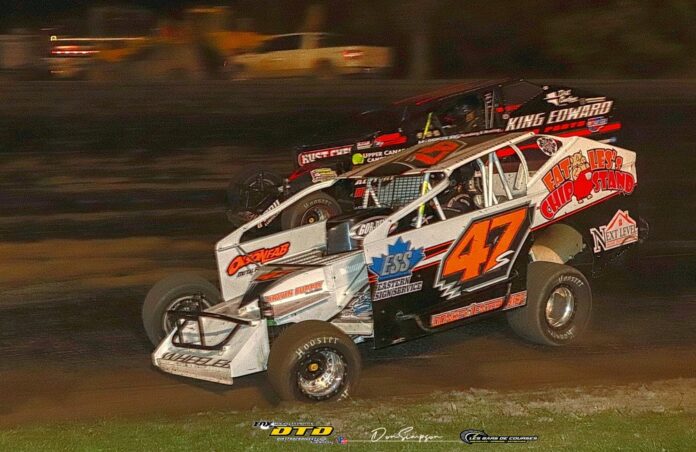 CORNWALL, ONT – Beautiful weather greeted the fans for the second day of the Fall Showdown Weekend presented by King Edward Auto Parts and DIRT Outlaw Apparel. Another solid field of cars showed up with 167 registered.

Alan Therrien took the early lead in the 60-lap Modified feature event as David Hebert challenged for the lead as both drivers ran side by side. The leaders were with slower cars by lap 15. Some movement in front as Therrien was able to pass Hebert for the lead and led a good portion until caution came on lap 33 for Brian McDonald. On the restart, Corey Wheeler went to lead and pulled away from the rest of the field as Alan Therrien raced side by side with Steve Bernard as the laps continued to click down. Wheeler had a strong car and led the final portion to capture the event over Bernard and Therrien.

In the 100-lap Sportsman feature, Mathieu Laramée took the lead over Moise Page and Tyler Givogue. On the restart, Page took the lead on lap 11, he took a good lead over Laramee and Felix Roy. Page in front as Bobby Herrington made some moves and went to second with 20 laps in the books. Page had a strong ride as Cody McPherson moved to second by passing Herrington on lap 42 restart. McPherson set is eyes on the leader with the race getting to halfway point. McPherson used the inside lane and passed Pagé for the lead on lap 61. Starting in 18th, James Friesen had a very fast car in the last portion of the event as he was able to move up quickly as he was able to take second spot and challenged McPherson for the lead in lap traffic but McPherson held off and captured a first win in Cornwall.

In the 50-lap Pro-Stock feature, Jocelyn Roy used his experience as he held off charges from Bruno Richard and Pascal Payeur as the feature only had 1 caution during the whole event.

In the 25-lap Lightning Sprint feature, Stephane St-Laurent had a solid car as he led the whole event that saw Alex Therrien having a bad crash on lap 5 but he was ok. St-Laurent won over Tommy Moreau and Jordan Poirier who had a late battle in the event.

Steve Comeau took the lead in the 25-lap Mini-Stock feature in the first portion of the race and wenton to win the race.

Final day of racing tomorrow at the Fall Showdown Weekend, the 125-lap Modified feature will be the headline of the day with $10,000 to win. A lot on the line with the Modified and Sportsman championships closing off.