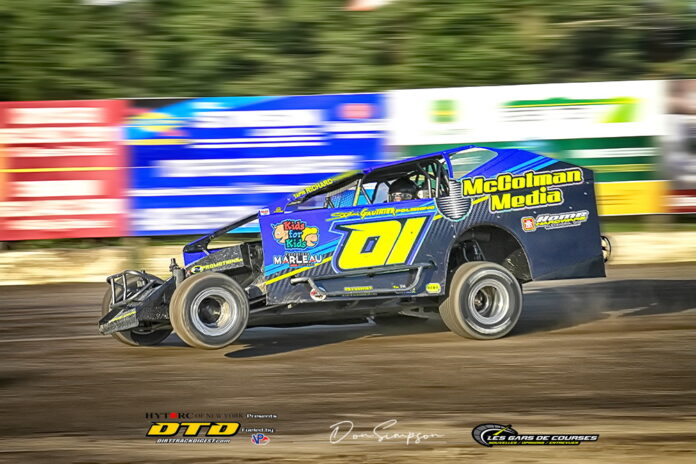 CORNWALL, ON – Chris Raabe left Cornwall Motor Speedway with a $10,000 check, fending off Erick Rudolph and Tim Fuller through thick traffic and a green-white-checker finish for the Série Canadienne Gros Block victory, the first race for big-block Modifieds at Cornwall since 2019. 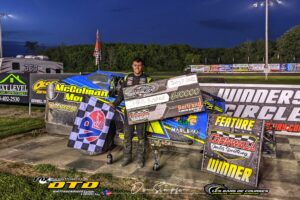 “Any time you can win a long-distance race here at Cornwall it’s always big,” stated Raabe after the huge payday.

Michael Parent showed the way over Carey Terrance early in the 75-lap main, with Parent up top and Terrance more towards the middle. The middle won out for Terrance, as he slipped by to the lead on lap 11. A few laps later, Raabe followed Terrance to take second from Parent, with Raabe working even lower on the track.

Raabe quickly set his sights on Terrance, reeling in Terrance through traffic. Terrance went low in traffic, and Raabe went lower, with Raabe finding fresh dirt on the inside berm and taking the lead on lap 25. Raabe showed excellent speed through the middle stages of the race, leaving Terrance to fight for second.

“I just tried to stay patient and not wear the car out to early and build too much air pressure,” said Raabe. “You don’t want to get a lead too early because then you are kind of a sitting duck, you don’t know where to go. Sometimes it’s good to follow.”

Following a lap 33 caution, Rudolph reached third, with Fuller not far behind. Rudolph and Terrance went to battle, with Rudolph taking the runner up spot on lap 44. By this point, Raabe was long gone, a full straightaway up on Rudolph and the field. 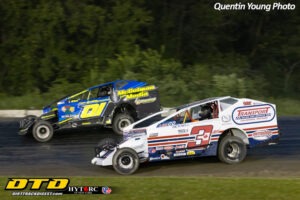 Traffic around the Cornwall bullring was tough, and the traffic aided Rudolph’s bid to chase down Raabe. By lap 65, Rudolph had erased Raabe’s lead. Both drivers were glued to the inner hub of the track, but though traffic, Raabe had to leave his lane. Rudolph put a nose under Raabe a couple of times, but Raabe cleared some lapped cars and held off Rudolph.

“I definitely saw Erick there at the end with about five or six to go,” he said. “He had me nervous. I was just putting around the bottom and when I saw Erick it was time to make a move and pick up the pace. He was definitely good on the long run.”

With two laps left, the yellow flag flew as Brian MacDonald caught the turn four wall with some force. Rudolph did not fire nearly as well as Raabe, allowing Raabe to skate away.

“I just finished clearling a couple of laps cars so I wanted it to stay green,” said Raabe. “I thought I had enough of a gap, but you never know for sure. I was just lucky enough to fire off good on that restart and hang on.”

Fuller started eighth, and methodically picked his way to the front to finish second. Contrary to Raabe and Rudolph, Fuller spent much of the event running the top.

“I’m not sure if I could’ve gotten Raabe if I restarted second there at the end,” Fuller noted. “I had a shot for three, four laps while the tires were cold, but Raabe was really good on the bottom. Both him and Erick were, I was watching them go at it. My big-block was hurt, so I had to bring the 358 tonight, but I think I would’ve brought the small-block anyways. It’s a long race, you know it’s going to be dry and slick, there’s just no advantage to having a big-block at that point.”

Rudolph ended the night third, driving car 3RS. This car is owned by Randy Slack, based out of the Niagara region of Ontario and featured a wide variety of successful drivers. Rudolph added his name to the pilots of the Slack machine, ending his maiden voyage with a podium.

“Raabe and I were both really good on the bottom,” stated Rudolph. “Really all that I could’ve done was have lapped traffic go a little better, or have the race stay green and get more traffic. We’ve been friends with the Slack family for a while, and it just worked out to do it. You never know what the future will have in store, so maybe we’ll do it again.”

Mike Mahaney finished in fourth while Terrance hung on to complete the top five after leading early.