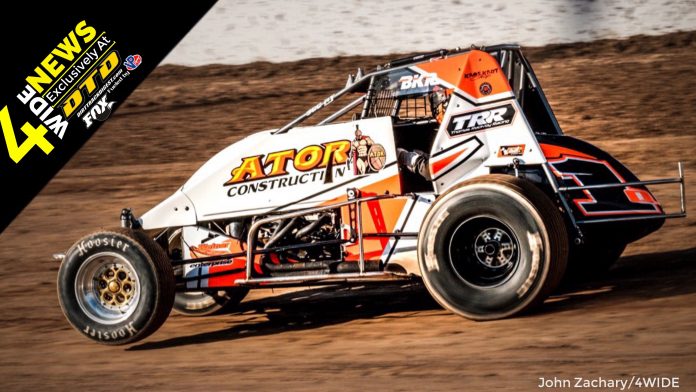 John Zachary/4WIDE-  Last year 23 year old Thomas Radivoy found himself in a tight points battle with veteran Jeff Trombley for the CSRA Championship. This was Thomas’s third year behind the wheel of a sprint car.

Radivoy lead the points most of the season, until a few tough nights at the track late in the season. A tenth place finish at I-88 didn’t help his teams quest for their first sprint car title.


How did you go from Go-Karts to Sprint cars? Where did you first see sprint car racing?

Well, we won almost everything there was on the asphalt. In 2012 I finished second in the nation. In 2013 we bought a used kart and won our very first dirt oval race.

We traveled to dirt tracks in both PA, and, NY racing on the dirt as much as we could. Then out of left field my dad and uncle said “would you ever consider driving a sprint car? “I shrugged my shoulders and said sure why not.” I didn’t have a clue about driving a sprint car.

In March of 2013 we hopped in my uncle’s motor home and headed to NC for a driving school.  The school was great, After a while I was laying down lap times as good as the instructor. On the way home from the driving school we talked sprints cars, and watched as many races on YouTube that we could find. (Remember I had never seen a sprint car race except on YouTube.)

Next thing you know we had a car sitting in the shop, and trying to find a practice session somewhere. As luck would have it CRSA was at I-88 Speedway, so we all headed there to see my very first sprint car race. The next time I visited I-88, I was in the seat!

We started late in the season, but ran good enough to grab the Rookie of the Year Award in CSRA.

Can you explain the biggest differences as a driver between winged and wingless cars? And how hard is it to go from one to the other?

The biggest difference between a winged and wingless sprint-car is the wings. You don’t quite realize how important they are until you do not have them about you. The top wing produces roughly 5000lbs of downforce, hence why they seem glued to the track. Without that wing a couple differences jump out at me. First off the car doesn’t want to naturally turn left on its own, you now have to wheel the thing.  The car also cannot handle at the same speeds as a winged sprint. Sprint cars are light and that wing plays a huge factor, without it you cannot enter the turn the same as you would with a wing. The amount of steering input is night and day different and the amount of throttle and break is different. If you think a winged sprint is sideways wait until you see a wingless race those guys are way crazier. As a spectators view i would have to say that wingless racing is a lot more exciting. And as a driver i have only went to wingless races as a spectator.

Is there a win that stands out to you more than any other win, and is there a race that you feel like it was your to win but you came up short?

Winning is one of the most amazing feelings there is. One thing that people don’t realize is LUCK plays a big factor in a race day. And it starts as soon as you get to the track, because you have to pull a number out of a hat for your starting position. I will never forget last year at Five Mile Point should have been my first win. The week before we felt that we had motor issues. So the night before the race we took off our wings and headed up to Accord speedway to shake down the CRSA 305 with the NEWS (Northeast Wingless Sprints). We knew right away that we had to put the back up motor in for tomorrow’s event. So the next morning i got up early and did a motor swap on race day to have an equal chance. Running late we barely made it to the track for the final practice session. Running around like chickens all day long we managed to make it into the redraw. Pulling pole we knew all that bad luck we had was paying off. Battled for a while then starting to pull from the field, the laps were counting down. Passing lap traffic one of them being a rookie, starts to spin as I’m overtaking him coming out of turn 4. He kept his foot in it and looped it, as he came back around, and hit my R/R tire breaking my rear end. 2nd place nearly missed us, and Emily VanInwegan took home the victory. Leading the majority of the laps only sugar coated the DNF. It didn’t come until the 2017 season that i got my first win. The first race I won was a Friday night at Accord speedway with NEWS. The first one was awesome but words can’t describe how amazing it was to win the very next day at OCFS with a totally different car. Friday night’s win was wingless and Saturdays win was in a winged 305, and that has to be tied with winning Eastern States weekend the very last CRSA points race for the year. We ended up winning 4 races with CRSA and had 3 wins with NEWS.

How many hours a week is spent working on your cars during the season?

There is no time clock at TRR (Thomas Radivoy Racing) so countless hours are put in. Being a dad has turned my late nights in the shop into early mornings. I used to stay at the shop all night not worrying about sleep or a social life because racing is my life. I get to the shop at 5 every morning because I don’t want to miss dinner with my girls. So from 5-8 is race-car time. Then it’s off to real work to support my family and this bad habit of racing that we all get so hooked on.

How many people help you at the races? And who are they?

The list of help can be counted on one hand come race day my dad Bob Radivoy, Steve Furlin, and myself are the team. Our Engine builder Dave Leonard comes from time to time when he’s not busy with is go-karting business. My wife Sarah and little Mackenzie come and keep the car clean when they can. Sometimes on long trips I bribe a buddy to split the driving with me.

Where can our readers follow you during the season on social media?

Who are you sponsors, and people that help you during the year?

This years sponsors are Country Service Center is our family owned auto repair shop. Actor construction, The Saturno’s are our other full time sponsors. All my panels are made by BKR, and powder coat is done by SCC NY. They put in hard work for us that isn’t unrecognized. I also have Kaos Kart shop, Kessler truck and Tractor sales, Rapid Tire and Wiener Enterprise are on board to make this 2018 season the best one yet. I can’t thank my father enough for everything he does, and Steve Furlin who has perfect attendance at the track.  He is always putting in hard work, getting covered in mud as he’s my push and my go to guy when I have track surface questions. Dave Leonard for giving me all the horsepower I need to get the job done come race day. Keith Larsen who is my mechanic at the shop, he helps me out when ever I need a helping hand during the week. And last but not least Sarah and Mackenzie for putting up with, letting me do what I love and loving it just as much as I do.