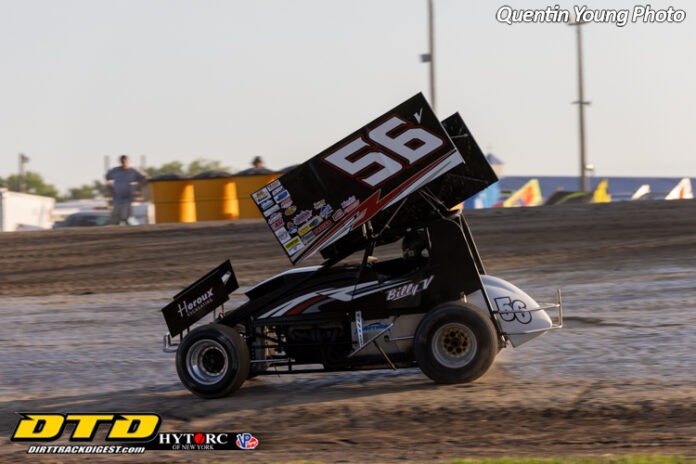 WEEDSPORT, NY – The 2021 CRSA Sprints race at Weedsport was just an appetizer compared to the show put on in 2022. Last year it was Bobby Parrow and Darryl Ruggles who dazzled the dirt and kept the fans on the edge of their seats.

May 2022, on a perfect weather day during Memorial Day Weekend, it was again Parrow and Ruggles doing battle from the front row. But this time the ending included a third entry- Port Jervis, NY shoe Billy VanInwegen and his VanDusen Racing No. 56v.

It was only appropriate that on a night when the CRSA Sprints set a new record for entries at a single event with 33 cars on hand, that the fans would be treated to a race of the year candidate in the 25-lap A-Main. VanInwegen would roll off the starting grid from the outside of row number three while it was Parrow and Ruggles who redrew the front row.

Ruggles would carry the momentum from the outside lane to lead from Dave Farney’s green flag. The race quickly went from a green condition to a red flag as Rochester’s David Ferguson went end-over-end into Turn 1 in the Speedy Cleaners, KCC Carpentry No. 45. CRSA officials were quickly on the scene to report that Ferguson was ok, receiving a thunderous applause from the packed house at “The Port.”

On the ensuing restart, Ruggles and Parrow wasted no time throwing haymakers- trading slide jobs for the race lead and even making slight contact in the second turn. Parrow would lead laps two through seven but after the race Parrow noted that the motor seemed to lay down on him on the third lap. A broken rocker stud was found and Parrow finished the night in third on seven cylinders.

On lap seven the yellow would be displayed for the final time at John Cunningham was facing the wrong way in the first turn. At the time of the yellow Parrow led Ruggles, Jordan Hutton who had a great night again at Weedsport, Mike Kiser in the backup Jeff Trombley mount and VanInwegen.

Parrow continued to hold the top spot with Ruggles in tow with ten laps completed as VanInwegen launched himself into the top three. But as the field saw the halfway mark the three leaders were now all grouped together and facing heavy traffic ahead.

The trio went three wide for the leading coming to ten laps to go with Ruggles now showing at the top of the leaderboard for the first time since the opening lap. “Billy V” slapped the turn four wall on this same lap and had many including car owner Mike VanDusen wondering if the 56v could continue on?

But that question was quickly answered on the opposite end of the speedway as VanInwegen found an opening below Parrow and now found himself as the runner up with nine laps to go. However the leaders were now facing side by side traffic in turns three and four which allowed Parrow to again go back by VanInwegen for second. The tables turned in one and two, allowing VanInwegen to power back by down the backstretch.

While this intense battle for the lead was going on, not many caught the fact that Jeff Trombley was clawing his way from the 12th starting spot to get into position number four before the checkers flew. In fact, Trombley had cut the margin from a full straightaway to within car lengths of Parrow at the finish for third.

Back up front, VanInwegen closed in on Ruggles quickly as Billy V was letting the Heroux Excavating ride slide across the dry, smooth and slick surface and just barely catch the brown, moist dirt on the outside edge and power off the corner. Coming to five laps to go, VanInwegen powered around Ruggles on the top shelf and had the lead for the first time in the event.

If the race thus far hadn’t entertained the fans, the last three laps certainly did. With three to go, VanInwegen caught up to put sister Emily a lap down to the field and created a situation that no doubt came up at the Memorial Day dinner table. Emily slid up the hill in Turn 2 which sent Billy low to try and make a pass. All the while Ruggles got a bite on the low lane and tried to squeeze Billy into cracking the throttle- in a pick and roll style pass for the lead.

VanInwegen never thought of letting off as he would butter up the sides of his ride and went three wide with Ruggles and Emily down the backstretch, bringing the Weedsport crowd to their feet. Ruggles completed the slidejob in Turn 4 to take the lead with two to go. But if you thought the magic from “Billy V” was done there- think again!

VanInwegen used the same line Ruggles did the lap before off Turn 2 and got a huge launch down the backstretch and pulled a slider of his own back into Turn 3. That slider was the winning move as VanInwegen held the lead for the final circuit with his fist in the air to pick up his third career CRSA Sprints victory and first since 2016 at Glen Ridge.

It’s hard to say Ruggles settled for second because there was no settling for any of the top three finishers on this night. Parrow was third, Trombley fourth and Alysha Bay in a backup ride came home with a Top 5.

For VanInwegen, this victory was redemption after losing their 360 power plant at Fulton the night before.

“We’ve parked on every other spot here on Victory Hill except this one, so it’s nice to finally check this one off.”

VanInwegen was complimentary to not only Weedsport’s facility but also to the track prep coordinated by Jeremie Corcoran.

“I have to tip my cap to Jeremie Corcoran. I love the way he preps the track and leaves a little lip at the top, slick all over. That produces the kind of show you saw out there.”

VanInwegen now puts himself in position as the points leader for not only the CRSA Sprints series but also the recently announced 6-race “I-90 Pit Stop Challenge Series” presented by all 16 of Central New York’s Pit Stop Convenience Stores.

The CRSA Sprints now turn their attention to a Saturday Night Special on the Fonda Fairgrounds at the Brett Deyo-promoted Fonda Speedway. Last year it was Jordan Hutton capturing his first career CRSA win in a dandy with the Professor of Fonda Jeff Trombley.

Midstate Basement Authorities “Out of the Basement” Bonus: David Ferguson 45