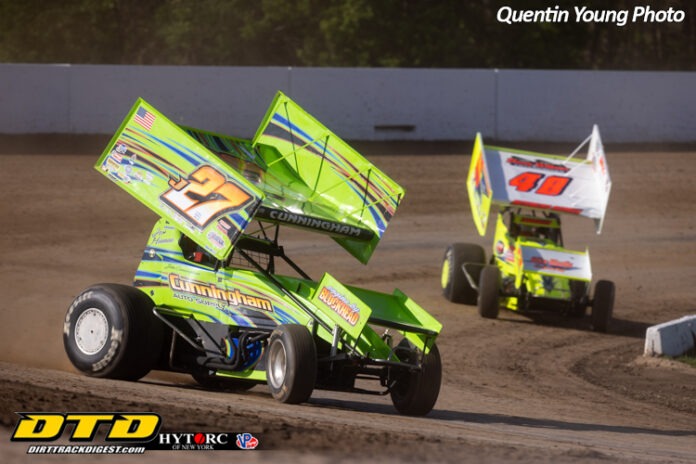 I-90 Challenge Races Get Purse Boost Including $200-to-start

SODUS, NY – Just days after one of the most exciting races in CRSA Sprints history as well as setting a new record for entries at a single event, the I-90 “Pit Stop” Challenge Series just got a bit sweeter.

“There were so many positive takeaways from Weedsport on Sunday,” said CRSA Sprint Series Director Mike Emhof.

“To start out the I-90 Challenge in that fashion for our friends at the Pit Stop Convenience Stores was our racers’ way of saying thank you for their support. Then to have a fan step up for our racers because of that show they put on was very much appreciated. The CRSA Sprints are gaining momentum and is already making 2022 our best season yet.”

The traveling 305 Sprints will next set their GPS units to Fonda, NY and Race #2 of the 2022 Series as well as the second race for the I-90 “Pit Stop” Challenge. Last season saw Josh Flint take his first sprint car victory at his home track in June. Mike Kiser bested good friend Jeff Trombley in the July stop at the Brett Deyo-promoted facility. In September during Fonda 200 Weekend, Jordan Hutton unlocked the gates to CRSA Sprints victory lane beating now four-time and defending series champion Trombley.

Make your plans to visit Fonda Speedway on Saturday night to see “The Future Stars of Sprint Cars!”