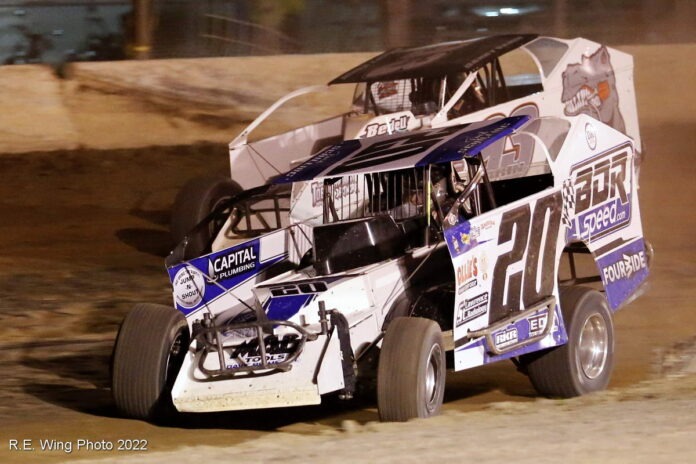 Also competing on Saturday at Fonda will be the CRSA Sprint cars for the second time in 2022. The CRSA Sprint Car organization started racing at the Fonda Speedway back in 2009 and through their last event, which was held on 6/4/2022, they have run a total of 25 events at Fonda with 13 different drivers winning those events.

A little over a month ago back on 6/4, Jeff Trombley started the 20-lap CRSA Sprint feature in the fifth position and moved into the second position on lap four, chasing the leader Jordan Hutton until moving in on the rear bumper on lap twelve of the twenty lap event.

Trombley made a move on the inside of the backstretch with seven laps remaining to take the lead and he survived one final restart to take the win over Hutton, Thomas Radivoy, Dalton Herrick, and twenty-first place starter Jeremiah Munson who made his way up to the fifth spot at the finish in his self-owned #51 car.

“Experience here at the track definitely helped,” Trombley said in victory lane. “He (Hutton) was fast and got out front but on that one restart I knew he was gonna cover the bottom and I got a run on him for the lead. The car was awesome, the track was good. I had a lot of fun, and it was good to see all the fans here. I love this place and anytime you can get a win here it’s a plus.”

Two drivers mentioned above that know the Fonda Speedway very well with success in the past in other divisions than the sprint cars are Trombley and Munson. Along with his two CRSA Sprint car victories at Fonda (the first one coming on 6/30/2018 and the last on 6/4/2022), Trombley also has one 358-Modified win back on 10/13/2001 along with 35 wins in a Big Block Modified in 20 winning seasons, the first one coming on 4/30/1988 and his last on 9/19/2014. Trombley also has two Track Championships in the Big Block Modified division back-to-back in 2001 and 2002.