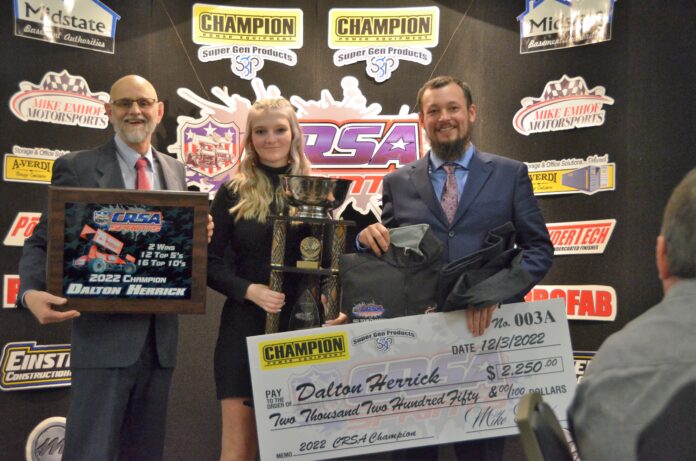 Herrick earned his first title in his career following a walk-off win for the ages at Afton Motorsports Park on October 7 during Short Track Supernationals Weekend. The McDonough, NY driver was locked in a fierce battle with Hannibal, NY teenage up and comer Jordan Hutton. The two swapped the lead during the Afton fall finale early in the feature after Herrick nearly spun to avoid an already spun car.

The 2012 CRSA Rookie of the Year referenced the near-incident and how it almost ended his team’s chances at making history.

“I thought we were done, I really did. As I worked my way back through the field I was counting cars and calculating the points in my head. The cautions fell the right way at the end.”

Herrick ‘ran the boards’ as he often says when the elbows up mentality kicks in. He raced his way from outside the Top 5 to making the pass for the lead exiting Turn 2 on the final lap when Kyle Pierce started running low on methanol.

For their success as a team in 2022, Herrick’s longtime Car Owner Art Kiser was awarded Mechanic of the Year honors. By virtue of gaining 47 positions in A-Main competition over the course of 2022, Herrick was awarded the Powdertech Powdercoatings Hard Charger of the Year. In all prize categories combined Herrick took home the lion’s share of a record $15,000 point fund, with his share totaling $2,750.

Runner up Jordan Hutton and third place points finisher Kyle Pierce shared their thoughts in front of the crowd while collecting their hardware and point fund earnings.

While he didn’t race all 16 races to make a run for a fifth CRSA crown, Altamont, NY driver Jeff Trombley did capture the Pit Stop Convenience Stores “I-90 Pit Stop Challenge” title. This series was comprised of six races between Weedsport Speedway, Utica-Rome Speedway and Fonda Speedway where Trombley logged two wins and never finished outside the Top 10.

Rookie of the Year went to Sherbrooke, QUE, Canada’s Tomy Moreau in what was the closest Rookie points battle in CRSA Sprints history. Moreau’s team also claimed the CRSA Dedication award for making the long tow to 13 out of 16 shows in 2022.

Calvin Wheelock kept Moreau honest in the Rookie battle all series long and was given a nod as Outstanding Newcomer for 2022. Wheelock also made 13 out of 16 shows, even finishing in the Top 3 in Hard Charger standings during those events.

While his beard has been trimmed back for Winter, Trevor Years’ continued acts of kindness was recognized with the CRSA Sprints Sportsmanship Award. A pair of nasty on-track incidents earned Ron Greek the award no driver wants to receive at the banquet- the Tough Luck Award.

Pierce was awarded Best Appearing Car for his green and purple Panther Frameworx No. 9K. Matt Priscott Racing got dealt several challenges along the way in 2022 and was recognized with the CRSA Sprints Perseverance Award for their never-wavering support to get to the track.

Mike Emhof presented the CRSA Service Award to Tonya Hutton who was an asset to the CRSA Sprints and the Mike Emhof Motorsports parts trailer on numerous occasions throughout the series’ busy schedule.

In a twist of a driver giveaway, the Magsarus Magneto was awarded to Aaron Shelton. All eligible drivers were placed on an electronic wheel spin program and as the wheel landed on a driver’s name that driver was eliminated. The final two spin came down to Shelton and Mike VanPelt.

Emhof concluded the CRSA portion of the banquet by informing the drivers and teams that a similar schedule of 16-20 races is in the works for 2023. Weekly sanctioned competition will continue at Land of Legends Raceway on Saturday nights, with more information to come this offseason. Several tracks on the 2022 have re-upped and at least one track will return to the fold for 2023.

BANQUET NOTES: Emhof also sadly announced on this night that after 20 years of racing, the Patriot Sprint Tour has run its final race after 365 events of competition. Emhof received a standing ovation for his efforts and the efforts of the PST Staff for the past 20 years. Announcer Paul Harkenrider and PST Employee for 18 of those 20 years, Josh Aylsworth, gave a touch speech on the history of the series.

CRSA HISTORICAL SEASON: The CRSA Sprints started their 2022 campaign with a historical night at Weedsport Speedway. A new record of 33 entries filled the pit area to cap off a new season and a new entry into the history books. Darryl Ruggles now adds his name as a driver with 5 wins at one track after his CRSA victory this season at Land of Legends Raceway- now tied with Scott Goodrich who has 5 at Afton.

Mike Kiser now holds the record for most CRSA Sprints seasons with a win, now at 8, after his September victory at the Fonda Speedway. Billy VanInwegen Jr. has now tied Cory Sparks and Brett Jaycox with 10 seasons a piece with at least one Top 5 finish. Dalton Herrick becomes the eleventh different champion in CRSA Sprints history in his 11th full season of competition.

Peter Dance and Ron Greek (both at Thunder Mountain Speedway in 2022) were first-time winner’s added to the CRSA Sprints history books.

Many thanks to Tom Skibinski for his efforts in compiling the overall statistics dating back to 2006.

For more information on the series, results and points please visit our website www.crsa.myracepass.com