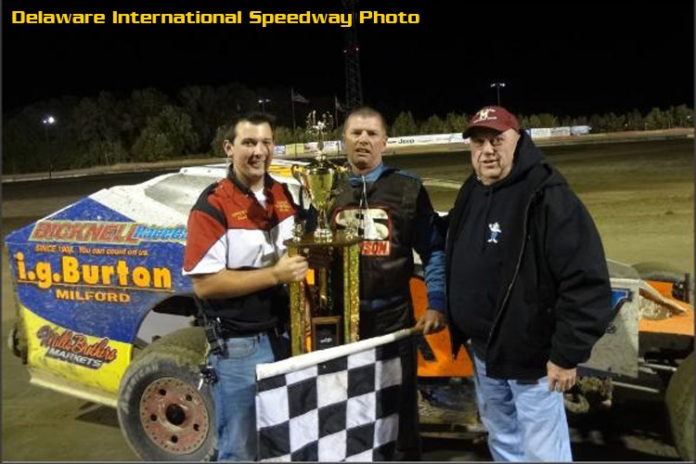 DELMAR, DE – Cooler temperatures but a fast track and a pits packed with racers provided the backdrop for the final night of the 2016 Delaware State Dirt Track Championships. With over $60,000 in prize money plus $4000 in lap sponsorship and $50 bonuses from Carolyn Parsons and Why Not Travel for supporting breast cancer awareness drivers had a lot to compete for. Even one lucky fan went home with the 2016 Dodge Pace Truck courtesy of K&B Auto of Delmar.

Friday night’s heat races were won by Craig VonDohren and Shawn Ward starting them in the top two spots. VonDohren set the pace but the yellow was out on lap two when Scott Hulmes got around. The next 20 laps provided some hard two groove racing. Mike Gular moved into second with Jamie Mills, who had started in eighth, taking third.

Mills was on the move taking second from Gular on lap 15 and closing on VonDohren in traffic by lap 20. H.J. Bunting had the fans’ attention as he was high riding from his 17th starting spot and was up to fifth behing Neal Williams.

Mills cranked it up on the outside taking the lead from VonDohren for lap 22 as Bunting moved into fourth behind Gular with Jordan Watson following into fifth. With Mills out front and VonDohren holding second Bunting and Gular put on a good side by side battle for third. Bunting slid too high on lap 36 losing three spots. Things only got worse when he and Matt Hawkins tangled ending his night with a broke shock.

Gular was the next to drop on the restart and the yellow was out again. On the third attempt Watson and VonDohren made contact with VonDohren getting around collecting Brad Trice and Dale Hawkins. VonDohren headed to the pits but not before expressing his displeasure with Watson with some contact.

This completely shuffled the top five with Mills still on top and Watson in second. Ryan Watt, who started in 13th was up to third with Richie Pratt, Jr. in fourth and rookie Brandon Watkins in fifth. Mills was back hard on the throttle pulling away in the closing laps by over three seconds for the win. With lap money and the gambler’s bonus the win totaled $7517.

Watson finished in the second spot with Watt third. Pratt finished in fourth and Watkins ended a great run in fifth.

Austin Hubbard was back behind the wheel of his Late Model and ready to race on Saturday night. Hubbard and friend Andrew Mullins were involved in a serious auto accident in North Carolina this past summer. Both are still on the mend but Hubbard proved on Friday night when he won his heat that he was back ready to race. Ricky Elliott started in the second spot after winning his heat on Friday.

Hubbard pulled out to a lead over Elliott at the drop of the green with Mark Pettyjohn quickly settling into third. Nic Davis who was sporting a throwback wrap on his car as a tribute to all-time leading winner at DIS, David Hill, held on to fourth with Joe Warren running fifth in his small block Ford.

The leaders were in traffic by lap ten and Elliott was able to close on Hubbard. The first caution did not fly until lap 14 when Robbie Emory got around and was tagged by Donald Lingo, Jr. Lingo had started the race in third but tangled with Pettyjohn early in the race while in third and dropped back to twelfth. He had been on a charge on the outside and could not avoid Emory.

On the restart Hubbard again pulled away to a 3.4 second lead until Kerry King caught a rut in the fourth turn and bounced to a stop. Amanda Whaley was now up into the fifth spot. Dylan Evans, who finished in the runner-up spot last year, would bring out the caution just past halfway keeping Hubbard from running away and hiding. A long stretch of green followed that allowed Hubbard to do just that.

Hubbard still seemed to have plenty left and went on to his first win in the fall classic. It was a big payday for him as he had led all laps, paid the gambler’s bonus and had the cancer awareness ribbons on his car earning $7885! “I’ve led 49 laps a couple of times and 48 laps once,” smiled Hubbard. “I is really great to finally win this one.”

Pettyjohn ended a good run in second with Whaley likewise in third. Fourth went to a steady Herb Tunis and Emory recovered from the early spin to salvage a top five.

Former big block rookie of the year, Eric Kormann of Vineland, N.J. and Tim Trimble of Easton, Md. won the AC Delco PSC Modified heats on Friday night and started in the top two spots on Saturday night. The pair would run in that order throughout the entire 25-lap championship and survive seven cautions spread through the race.

Devin Dodson’s chance for back to back wins in the event ended early in a fourth lap pileup and 2016 point champion, Jordan Justice had his night cut short on lap nine when he got around and was tagged hard by Jeff Brown. Dwayne Crockett got by Scott Hitchens with five to go and went on to finish in third with Brian Hitz taking fourth and Joe Tracy fifth. Results are unofficial until early in the week when extensive tech is completed.

Defending point champion, Matt Hill spent most of the 2016 season on the road. Hill returned on Saturday night leading flag to flag to take the $2140 win. “We learned a lot traveling this season,” said Hill. “but it is really good to be back home and to win.”

Brandon Dennis jumped out to the early lead in the 20-lap Mod Lite championship. Nick Sapp held a close second with James Hill running in third. Hill got by Sapp on a lap three restart and chased Dennis until five to go when he moved to the outside and took the lead.

Hill went on to record his 13th win of the season worth $1340. Dennis had to settle for second place with Sapp third. Jimmy Wills crowssed the finish line in fourth but was light at the scales giving Connecticut driver Ryan Charland the spot and Jason Musser rounded out the top five. Dennis and Sapp won the qualifying heats on Friday night.

Shane Clogg led every lap of the 12-lap Super Truck championship for what appeared to be the win but failed to report to the scales following the race and was disqualified. James Hill driving the Mattie Long No. 69 had won a race-long battle with David Smith and Robert Smith to finish second and was credited with the win. Robert Smith, David Smith, Matt Esham and Bobby Reed rounded out the top five in the caution free event.

Reid Mitchell who flipped and was struck hard in the back of his truck’s cab on Friday night was treated and released from the hospital. Mitchell was sore but otherwise reported to be OK.

The first lap of the 12-lap Vintage championship was a wild one with cars going in all directions right from the drop of the green and by the end of lap one Freddie Brightbill, John Burton and Dwayne Heck were all done for the night.

Mark Williams was able to hold off C.J. Schirmer for the remainder of the distance to take the win. Veteran Dave Schamp made his first trip to victory lane in 40 years finishing first sportsman and third overall.