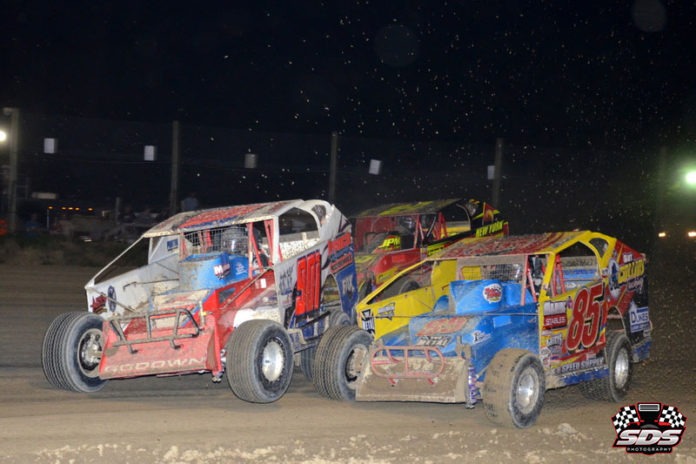 H.J. Bunting of Milford, Del. successfully defended his 2015 NAPA Big Block Modifed Championship in 2016 for his seventh overall crown in the division tying Bobby Wilkins for all-time championships. The division saw 11 different drivers score wins and Bunting’s four wins and consistent finishes in the Jake Marine owed No. 85 was enough to earn him the crown. Bunting earned 1820 points and $5500 for winning the title over up and coming talent, Matt Hawkins of Hartley, De. Hawkins had two wins and earned 1705 points. Third went to Laurel, Del.’s Scott VanGorder who scored a win and totaled 1469 points.

In the S.R Pete & Sons Super Late Models, Donald Lingo, Jr. of Millsboro, Del. increased his championship total to seven by successfully defending last year’s crown. Lingo, Jr. drove his Lingo Marine Ford prepared by his father to four wins and battled right down to the final week to earn 1813 points and $5500. Nick Davis of Gumboro, Del. chased Lingo, Jr. to the wire for the second year in a row earning one win and 1658 points for second. Third went to former champion, Ricky Elliott who won three mains plus the modified/late model shootout and earned 1460 points.

Earning his first championship in the AC Delco PSC Modifieds was Jordn Justice of Laurel, Del. Justice posted his first win of the season in week two and never looked back earning 4 more wins and 1905 points to clench the title. Dwayne Crockett of Laurel had his best year to date which included winning the Fall Championship for a total o 1690 points. Third would go to defending champion, Devin Dodson of Bishopville, Md. who’s total was 1213 points with two season wins. Justice’s championship was worth $1500.

Another driver earning his first championship title was Sparky White of Delmar, Del. Sparky became the third generation in his family to win a title at the track posting just two wins but earning a total of 1689 points to win $1500 and the Crate Model title. Former champion, Tyler Reed of Milton, Del. put together another great season posting one win and finishing just 40 points back with 1649. Robbie Walls, Jr. of Georgetown third place finish was his best to date with one win and 1579 points.

2016 was the break through season in a big way for James Hill of Laurel, Del. in the Mod Lites. Hill had come close to winning the title on several occasions but he was not to be denied this season. Right from the drop of the green Hill strung together seven consecutive wins. He posted 13 wins overall including the Fall Championship earning him 2086 points and $1100. Last year’s champion, Tim White of Salisbury, Md. was the closest to Hill at the end earning a win and 1743 points for second. Returning to action in 2016 was former four time champion, Brandon Dennis who’s two wins and 1599 points netted him third overall.

The 2017 schedule is near completion and will be available on the web at www.delawareracing.com in the near future.