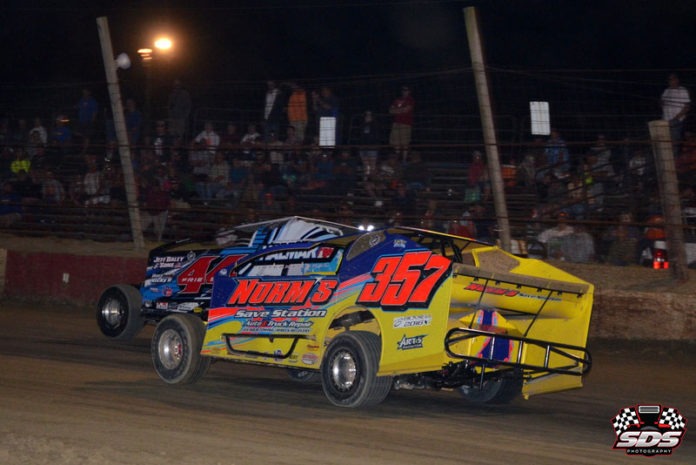 DELMAR, DE – In the first state, there have been several dirt tracks, some which were in operation through the 50’s, 60’s, 70’s, and all the way up into the 21st century. Each track has had a following of racers, fans and sponsors whose names have remained cultural legends. DIS, being a small family-owned racing facility, the Cathell family understands what it takes to survive in the business community. There is one family who has been a long-standing supporter of the Delaware International Speedway, whether owning a team, sponsoring a team or sponsoring the speedway in various ways. The Messick families of Harrington, Delaware have been dedicated to the sport of dirt track racing here in the first state.Starting with the late Walter and Marie Messick, founders of the well-respected business, Taylor & Messick, a John Deere dealership located in the heart of Harrington, Delaware, not only were they respected in the business sector, but in virtually everything in which they would be involved. This would include their support of dirt track racing. In the early days of racing, Walter and Marie Messick loved to attend dirt track racing along the east coast, they were also very involved in assisting race teams and owners with sponsorship funding. Since their passing, their children have continued this legacy supporting teams and the speedway each year.

Over the winter months, the Cathell family approached Jimmy Sr, sister, Rhonda and son, Jimmy Jr. to acknowledge this legacy with an event in their honor. Anyone who knows this family, they are not one to be in the spotlight, nor boast of their accomplishments. “It was not easy talking the Messick family into accepting this event,” states track operator Charles Cathell.“Looking back, we should have done this years ago,” states Cathell. “Over the years, we have developed more than a business relationship; it has truly grown into a great friendship!”

So, this year, we will kick off the dirt track season with The “Messick Family Full Throttle Series” for the Napa Big Block Modified series. This event will be held on Sunday, April 2, 2017. This will also be the first race in the all new “Full Throttle Series” for 2017. The all new “Full Throttle Series,” paying out over $130,000 in purse, will feature 7 scheduled races for our Big Block Modified division. This series is sure to create a return of the epic “North vs South” battle. Each race will offer the winner of these 40 or 50 lap features a healthy purse payout of $4,000-$5,000 to win (depending on the event). In addition to the increased purse structure, racers will have guaranteed $400-$500 to take the green flag start. Delaware’s best will love competing with some top names from the north to see who has the best drivers in the Mid-Atlantic region. For some of those stout small blocks out there, a small block “Top Finisher” award and bonus money will be offered.The dates for this series are as follows: April 2, May 25, June 15, July 13, August 3, September 15 and October 21.

POWER PLAY BONUS CASH, ON TOP OF THE OVER $130K IN PURSE WE WILL HAVE A BONUS PROGRAM!

IF ONE DRIVER CAN SWEEP ALL 6 FULL THROTTLE SERIES RACES, PLUS THE DELAWARE STATE DIRT TRACK CHAMPIONSHIP BIG BLOCK MODIFIED RACE, THEY WILL RECEIVE AN EXTRA $20K BONUS! GIVING ONE DRIVER A POTENTIAL PAYDAY OF OVER $50,000 DOLLARS!!

IF ONE DRIVER CAN WIN 5 OUT OF THE 6 RACES AND THE CHAMP SHOW BIG BLOCK MODIFIED RACE, THEY WILL RECEIVE AN EXTRA $10K BONUS!

IF ONE DRIVER CAN WIN 4 OUT OF THE 6 RACES AND THE CHAMP SHOW BIG BLOCK MODIFIED RACE, THEY WILL RECEIVE AN EXTRA $5,000!

IF ONE DRIVER CAN WIN 3 OUT OF THE 6 RACES AND THE CHAMP SHOW BIG BLOCK MODIFIED RACE, THEY WILL RECEIVE AN
EXTRA $2,500!

Joining the Big Blocks will be the 602 Sportsman racers with a $1000 to win and $100 to take the green purse up for grabs. To round out the night of racing will be those competitive Super Trucks and Delmarva Chargers, with great side-by-side action
around the half mile.

On Sunday, April 2nd along with the Super Trucks and Delmarva Chargers, our weekly Mod Lite division will be joining them for their first appearance of 2017.

We hope that the community will join us on April 2, 2017, to acknowledge the Messick family and their efforts over the years.