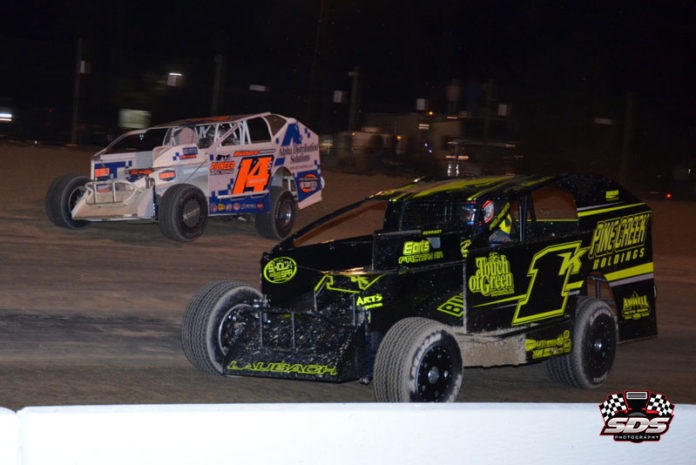 Rick Laubach of Hellertown, Pa. came into the event as a fan favorite, and Laubach certainly didn’t disappoint his fans. Laubach would go on to demonstrate just how powerful the Kerr all-aluminum small block car was when he shattered the track record in hot laps with a lap of 17.850 on the new clay half mile surface.

Jordan Watson, Jimmy Horton, Craig VonDohren and Laubach would capture the four heats and Mike Gular picked up the win in the consolation. The top three from each heat drew for the ASI Sportswear Pole Position with Duane Howard pulling the No. 1 starting spot.

The caution was out before the first lap was complete when Ryan Godown, Matt Jester and Danny Johnson stacked it up in turn four. Howard would lead the first lap but Laubach came blasting from fourth to lead lap three. Jamie Mills was on the move from fifth and took second from Howard.


The yellow was out on lap eight when David VanHorn came to a stop. On the restart, Howard left early and was put to the rear. VonDohren was now riding in third and searching all over the track for a way around Mills. At the halfway sign it was Laubach out front, with Mills getting back by VonDohren for second Jordan Watson who started in ninth was up to fourth and H.J. Bunting, who started in eight was riding the high side in fifth.

VonDohren finally won the battle for Mills for second one lap later and started to reel in the leader. With nine to go he was trying both the high and low side to find a way past Laubach. That challenge would go right up to the white flag when the right rear would let go on VonDohren’s car. He would limp around the final lap to finish a disappointing seventh.

Laubach had no problems on the final circuit, taking the checkered and heading to the Victory Graphics Victory lane. “I’ve been racing for 23 years,” smiled Laubach following the win. “This is the best car I have ever driven. I could tell the VonDohren was right there.” The win was worth $4000 plus lap money courtesy of Jeff Brown and Chesapeake Paving.

Mills ended a great drive in second with Watson third. Fourth went to the veteran Horton and Bunting ended a good run in fifth.

A good crowd was on hand and during intermission the Messick family was recognized for the major roll they have played in local racing for more than a half century. A section of the reserved grandstand was dedicated to the memory of Walt and Marie Messick who became involved in local racing when it first started on Delmarva. Taylor & Messick John Deere also gave away a D105 John Deere lawn tractor to a lucky fan and a commerical air compressor to a lucky driver. The feature event was in the books by 9:25 pm.

Crockett started on the pole and would drive a flawless 20-laps. Jason Rush gave chase in the early stages before Tom Tannertook up the chase of Crockett on lap three. Matt Stangle followed in the third spot holding off defending point champ, Jordn Justice and former champion Scott Hitchens.

The race went caution free until five to go when Trent VanVorst came to a stop on the inside edge of the front straight. Tanner continued to apply the pressure on Crockett while Justice moved into third. The yellow would be out for a final time as Jeremy Harrington tangled with Stangle in the fourth turn with two laps to go.

Crockett had a perfect restart and held off a good challenge from Tanner to end up in the Victory Graphics Victory Lane and to collect $1000 for the win. Crockett received an additional $80 in lap money courtesy of L&J Sheet Metal of Laurel. Tanner made the three and a half hour tow from Ivyland, Pa. worth while as he finished in second and former track champion, Scott Hitchens made a late race charge to finish in third. Heat winners were Hitchens; David Jenkins & Justice.