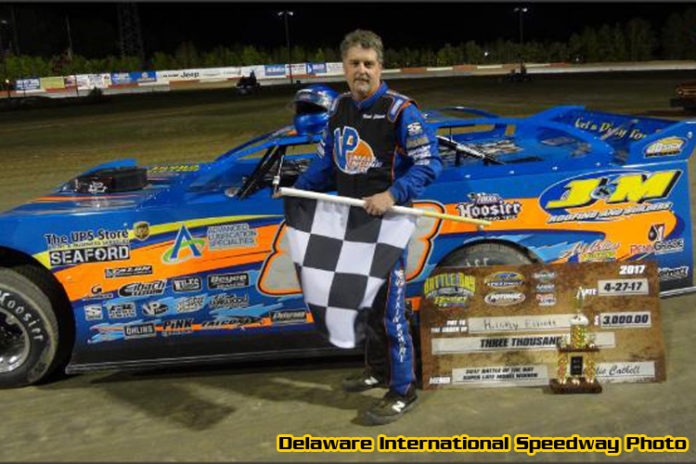 DELMAR, DE – Thursday night at the Delaware International Speedway it was race one of the first leg of the three weekend – nine race “Battle of the Bay” for the Super Late Models and the RUSH Racing Series Crate Late Models. Seaford, Del.’s Ricky Elliott was in top form as he led all 35-laps of the Super Late Model event and Joe Warren of Georgetown, Del. dominated in the RUSH Series 20 lap feature.

Heats for the 20 cars were won by Amanda Whaley and Ricky Elliott after the pair set the top two times in qualifying respectively (18.610 and 18.793). The top three from each heat drew for starting position in the main. Elliott elected to have a young child draw for him and luck was with her as she drew the No. 1 starting spot.

Elliott set the pace at the drop of the green with Nick Davis jumping into second and Ross Robinson third and Whaley squeezing under Austin Hubbard and Glenn Elliott for fourth. Elliott’s new BRC Lazer chassis was working to perfection as he pulled from the field.

Dale Hollidge was the car on the move patiently climbing from back into the top five on lap 16 after a bad initial start. Robinson got by Davis for second just before halfway but Elliott was already long gone. Hollidge continued to be on the move taking fourth from Whaley with nine to go and third from Davis on the next circuit.


As Elliott became mired in traffic, Robinson began to close the gap but time was running out. A glimmer of hope happened with four laps to go as the one and only caution of the race flew as Donald Lingo, Jr. slowed at the top of turn two.

“I knew I needed to hold the bottom,” Elliott said about the restart. “I actually thought there was going to be I top because I passed a couple of cars on the outside. I said to myself I’m sure there is somebody up there trying it but they were running through the water and pushing it up on the track down there so I just didn’t want to take a chance getting out of the groove.

Elliott stuck to the bottom for the final four laps and was not challenged as he drove to the $3000 win plus lap money sponsored by K&B Auto Sales of Delmar. Robinson was able to hold off Hollidge in the final laps for second. Whaley held on to finish in the fourth spot and Mark Pettyjohn came all the way from 12th to finish in fifth.

Tessman drew the pole starting position and jumped out to the early lead. The yellow was quickly out on lap two for a spin by Chuck Bowie. Tessman continued to hold down the top spot but drifted a little high in turn four on lap seven opening the door for Warren to take the lead.

At the halfway sign the top five were Warren, Tessman, Cory Almond, Bare and Austin Hubbard. The race would stay green until four to go when two-time winner this season at Winchester Speedway, Logan Roberson came to a stop. The field would get in one move lap before the yellow flew for a third time, this time for pole sitter Tessman after trading paint in the battle for fourth.

Warren was flawless in the final laps to take the $1000 win plus laps money from sponsor Campbell’s Collision of Salisbury, Md. Almond finish a respectable second on his first ever visit to the track and third generation Virginia driver, Tyler Bare rounded out the top three. Fourth went to Hubbard and Allen Brannon came from tenth to finish in fifth.

The 12-lap Super Truck race was highly competitive with three and four wide action. Matt Esham waited until a last lap restart and the final turn to get under race long leader, Robert Smith for the win. Matthew Smith finished in third with David Smith fourth and Jerry Hill fifth.

In the 12-lap Delmarva Charger feature, Jerry Barker led the first five laps before a flat tire sent him to the pits for a fresh tire. Tanner Marvel became the new leader and held on to that spot to the checkered. Scott Calhoun chased Marvel the entire second half settling for second with Buddy Sipple driving a smooth race to finish in third. Fourth went to “Pacman” and Ashley Merritt rounded out the top five.A