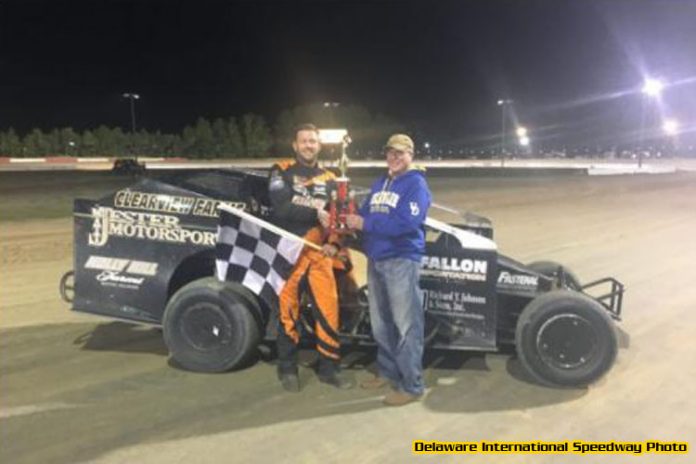 DELMAR, DE – Mother Nature has not been a fan of dirt track racing on the east coast to start the year, but on Saturday night she finally accepted defeat and allowed racers to play in the clay. The pits were filled with a stout field of cars throughout the division. Over 25 NAPA Big Block Modifieds from throughout the Northeast came to race in preparation for Thursday night’s STSS Diamond State 50. The night started off with track records falling in our AC Delco division, SR Pete & Sons Super Late Model division, and RUSH Crate Late Model division, so drivers were in for a treat of a fast track on the night.

When the Big Block Modifieds rolled out for their feature event it was defending champion, HJ Bunting leading the way. Bunting would feel immediate pressure from long time rival Jammin’ Jamie Mills on lap two, and would quickly lose the battle to Mills. Mills would continue to pace the field for the next several laps, but it wasn’t without constant pressure from Bunting, Jordan Watson, and Matt Jester.

As the laps started working their way down, Jester would start creeping up towards the high line of the track. As he did, the lap times got faster, and the gap started shrinking. With Mills on the low line, Jester planted his foot down on the Small Block, and drove around Mills on the high line. Cautions would continue down the stretch, but Jester would not be denied the win, setting up for a nice swing of momentum for Thursday’s Diamond State 50. Heats were won by Bunting, Jester, and Robert Dutton.

In the S.R. Pete & Son’s Super Late Models it was a solid field of 18 cars, and none other than, “The Wild Child” Amanda Whaley would lead them to the green. Whaley started the night by winning her heat and shattering the track record by over a tenth of a second. Whaley’s speed would continue in the feature, but she would have her hands full holding off Ross Robinson, Mark Pettyjohn, and Nick Davis.


Davis’ XR1 Rocket was on a rail Saturday night, and Nitro Nick was flat footing his way around the ½ mile. Pettyjohn in his Schwartz chassis was right along side as the two would drag race down the straightaway’s and roll together through the corners. On lap 15 Davis and Pettyjohn’s tight racing would come to a head as the two made contact sending Davis rocketing through the infield. Davis’ night would come to and end, Pettyjohn would head to the pits and return, but could not find the speed he once had.

After relinquishing the top two positions, it was Ross Robinson that would be the new man out front. Robinson would lead the first two laps after the green flag came back out, but it was the silent assassin, “Rowdy” Andrew Mullins that would be the star of the show. Mullins came out of nowhere, worked around Robinson, and would begin to pace the field. It was a no mistake night for the driver out of Seaford, Delaware, and Mullins would make it a two win night for the family to go along with his Brother-In-Law’s win from the Big Block Modifieds. Heats were won by Whaley and Robinson.

In the RUSH Crate Late Model’s it was “The Thrill” Matt Hill that would bring the field to the green. Hill struggled in the Battle of the Bay race to begin the year, but certainly found his stride on Saturday night. Hill along with Battle of the Bay winner, Joey Warren, would start the feature first and second. Cautions would plague the Crate Late Models to start, but eventually Hill would start to stretch his legs.

Hill would lead flawlessly for the first 15 laps, and on any other night that would have picked him up the win. However, it was the 20 lap Crate Qualifier, and Hill would need 5 more laps to seal the deal. But on lap 16 Joey Warren would crank things up, and shoot around Hill. Warren would bring Mike Wharton in tow, and Hill would drop two spots down to third. Wharton would get close enough to contend, but never had what it took to get around Warren, and Warren would go on to claim his second win of the season.

The AC Delco Modified’s came through the gates eager after being off at Delaware International Speedway since the April 2nd Full Throttle Racing Series. Joe Tracy and Scott Hitchens would be the first two drivers to get a taste of victory on the night as they picked up wins in their respective heats. Hitchens would get the pole courtesy of fastest time out of the heat race winners, and he made sure to take full advantage of the starting position.

Hitchens would being to feel pressure right out of the gate from Tracy, Full Throttle Race #1 winner Dwayne Crockett, and 2016 DIS Track Champion Jordn Justice, but he would be sure to put the blinders on and hammer down. Hitchens would go on to lead all 15 laps in the AC Delco feature and make it two for two on wins for the week after picking up a win earlier in the week at Georgetown Speedway.

James Hill has been the gold standard in which all other Modified Lite drivers have looked to be across the nation in the past two years. Hill, was able to get the Championship monkey off his back in 2016, and so far in 2017 has been the man to beat again after picking up a win at the first Full Throttle series race in April. He would again carry the momentum into Saturday night’s race and pick up a win in his heat race.

After winning his heat race, Hill would start on the pole courtesy of fast time over fellow heat race winner, Jason Musser. Musser would give it all he had on the initial start, but was never quite able to get to Hill. Cautions would keep erasing the lead that Hill would build up, but he would not let that get to him as he drove a flawless race and went on to pick up his second win on the year.

Delmarva Chargers were on hand Saturday night, and Scott Calhoun would hold off a charge from Jay Sipple and a hard charging Jerry Barker to pick up the win on Elliott Farms night at the races.