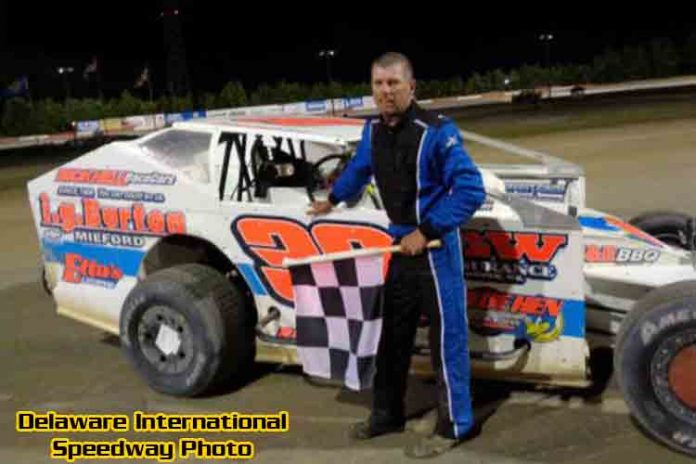 DELMAR, DE – Last week was a rough week at the Delaware Internation Speedway. On Tuesday, track promoter Charlie Cathell was severely burned in a fire and explosion while transferring racing fuel at the track. Cathell was airlifted to Johns Hopkins Hospital in Baltimore, Md. where he is in stable condition recovering from burns on his arm and torso. His family hopes that he will be able to be released sometime during the coming week to complete his lengthy recovery at home.

On Saturday night a blown circuit breaker for part of the track lighting delayed the program for more than an hour while a replacement was located and installed. With the first appearance of the Mid-Atlantic Super Sprints on the program and a total of 124 cars in the pits it was a race against time to get the program in before the 1 a.m. curfew.

Two red flags in the first five laps of the MASS feature, one requiring emergency transport ended their feature just before curfew forcing the speedway to add the RUSH Crate Late Model and Mod Lite features to the June 24th program.

The first appearance for the Mid-Atlantic Sprint Cars Series did not get off the a smooth start. Twenty-three cars took the green but the red was out before the first lap was completed when Bobby Scherft and Bronzie Lawson locked horns and did a double flip off the third turn. Both drivers were okay but their cars were not.

Tim Tanner grabbed the lead from Tommy Carberry on the restart but it took only five more circuits before the red was out a second time when first erupted on Bobby Sandt’s car and he slid to a stop in the third turn. Safety crew quickly extinguished the first but Sandt was transported to the local hospital after suffering some burns in the incident.

Kevin Darling, who had just taking second from Carberry, grabbed the lead from Tanner on the restart. At the halfway sign the top five were Darling, Tanner Carberry, Brendon Poff and Jeff Geiges.

With seven laps left to go Darling started working traffic to perfection and Tanner was unable to close. Just when it appeared the Darling had the race under control he slowed going down the front straightaway and rolled to a stop in the first turn to bring out the yellow.

Tanner found himself back on top and was able to hold off Carberry for the remaining distance to post his first win of the season. Carberry finished in second with Poff third. Fourth went to Geiges and Joe Kay came home fifth. Heats were won by Rick Steif, Darling and Poff.

A full field of 24 NAPA Big Blocks were on hand Saturday night with father and son, Bobby and Brandon Watkins winning the heats.

Kevin Sockriter was fast from the drop of the green from his pole starting position. Brandon Watkins took up the chase from second with Jordan Watson running a close third. Jamie Mills was hammer down from his ninth starting spot and when Watson took second, followed into third.

Watson’s challenge ended on lap seven when the car slowed down the back straight bringing out the yellow. On the restart Mills took up the chase of the leader with Bobby Watkins and Matt Jester filing into third and fourth.

Mills moved on top for lap nine just and the yellow flew for a tangle between Carson Wright and Scott VanGorder. For the second week in a row, JoJo Watson was on the move in the Blue Hen team car as he worked by both Sockriter and Jester for second by the halfway sign.

While Mills maintained solid control of the lead JoJo and Jester swapped second. With five to go Jester nailed down the spot but was unable to catch Mills. It was the second straight win for Mills with Jester second and JoJo Watson third. Fourth went to a late charging Matt Hawkins and Sockriter held off Bobby Watkins and Jim Britt for fifth.

The quality and competition in the S.R. Pete & Sons Super Late Models has been through the roof this season. Saturday night’s 20-lap feature was no exception. Heats were won by last week’s winner Nick Davis and point leader Ross “The Boss” Robinson.

Herb Tunis took advantage of his outside second row starting spot to out drag race Rob Schirmer and Dylan Evans to the first turn. Evans settled into the second spot with Mark Pettyjohn following into third.

Pettyjohn grabbed the second spot just as the yellow flew for Ed Drury on lap five. Pettyjohn got a great restart and beat Tunis to the first turn on the restart. Donald Lingo, Jr. was on the climb bringing Robinson with him into third and fourth respectively.

By halfway Lingo was up to second but was being challenged by Robinson. Pettyjohn had built a comfortable lead but that was erased with six to go when Bob Geiger rolled to a stop to bring out the final yellow.

Pettyjohn had no problem on the restart and was flawless the rest of the distance to take the win. Robinson won the battle for second with Lingo finishing a strong third. Fourth went to Nick Davis who came from seventh and Amanda Whaley rounded out the top five.

The 15-lap AC Delco PSC 602 Sportsman feature turned out to be a great battle between second place starter, David Jenkins and former champion, Scott Hitchens. Jenkins took the lead from pole sitter, Jeff Marker on lap one and Adam White followed into the second spot.

Hitchens was on the move from ninth and was already up to the second spot by lap two. Jenkins had a sizable lead but Hitchens was on his rear bumper by lap five. The only caution would come just past halfway for debris.

On the restart the Hitchens went to the inside. The pair did the rub rail grind down the front straight with White going three wide for the lead. Hitchens was able to get to the first turn first to lead with four to go and race to his third straight victory in the division. Jenkins finish a personal best in second with Jason Rush coming on strong in the closing laps to finish in third. Fourth went to Dwayne Crockett and Joe Tracy rounded out the top five Heats were won by Jeremy Harrington and Jenkins.

Derek Swafford paced the Delmarva Charger field for the first four laps of their 12-lap feature until Tanner Marvel, who started in sixth, moved on top. Jay Sipple climbed to second until Scott Calhoun, who had started in 11th took the second spot on a lap 10 restart.

Marvel would make no mistakes and drive to his second win this season with Calhoun, Jay Sipple, Swafford and Robert “Pacman” Paczkowski fifth.