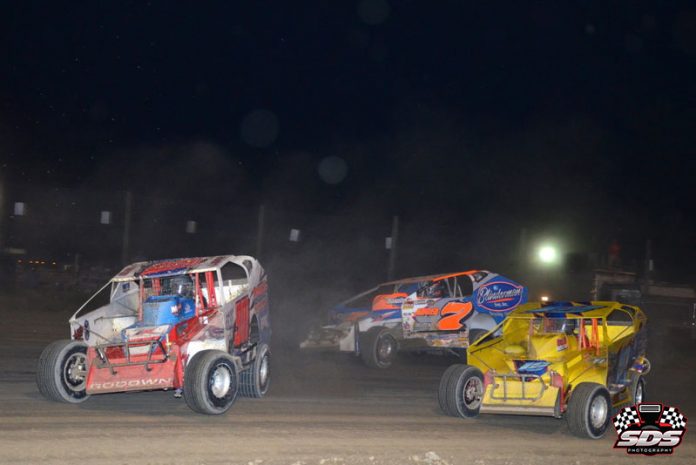 DELMAR, DE – Delmarva race fans won’t have to look to the sky to find the stars this Thursday, June 15.

Notably, auto racing legend Kenny Brightbill of Sinking Spring, Pa., will make a rare Modified start in his 50th – and final – season of racing. Brightbill was tabbed as the driver for First State car owner Keith Coulbourne in a No. 55 for the ‘Diamond State 50’ special. It was aboard Coulbourne’s equipment that Brightbill won his last Modified track championship at Delaware International Speedway in 2010.

Another Hall of Fame driver – Frank Cozze of Wind Gap, Pa. – plans a return to Delaware International Speedway driving the Adirondack Auto-backed No. 35 big-block, a car Cozze will drive in select special events this summer.

Jimmy Horton of Neshanic Station, N.J., sits atop the STSS South Region standings with two events in the books as he searches for a $10,000 championship. Horton has a win to his credit in the First State this season, taking the Melvin L. Joseph Memorial at Del.’s Georgetown Speedway in March.

Horton’s Halmar International teammate Stewart Friesen of Sprakers, N.Y., is the defending ‘Diamond State 50’ winner and plans to return to Delaware International in search of another triumph.

‘The Doctor’ Danny Johnson won at Georgetown in June. He will trek south from his Rochester, N.Y., home again on Thursday to strap into Jeff Brown’s Chesapeake Paving No. 27J.

Joining Friesen and Johnson from the ‘north’ are Massachusetts native Andy Bachetti, a winner at Afton (N.Y.) Motorsports Park, Lebanon Valley Speedway in West Lebanon, N.Y., and Orange County Fair Speedway in Middletown, N.Y., this season; and rising star Anthony Perrego of Montgomery, N.Y., the most recent STSS winner in Halmar International North Region competition at Thunder Mountain Speedway in Center Lisle, N.Y.  Perrego has a victory in the state of Delaware on his resume, reaching Victory Lane in March 2016 at Georgetown.

The Pauch family – Billy Sr. and Jr. – will each be in competition, Sr. in the Kevin Bifulco No. 1 and Jr. in the Daniel Sommeling No. 51. Other Jersey standouts include 2015 ‘Diamond State 50’ winner David Van Horn Jr. in the Fred Vahlsing No. 323ov, Ryan Godown, and, fresh off solid runs at Bridgeport (N.J.) Speedway in the most recent STSS Velocita-USA South Region event, Neal Williams in the Sal DeBruno No. 0 and Richie Pratt Jr. in the family owned No. 28.

From Pennsylvania, the ‘Big Three’ of Duane Howard in the Norm Hansell No. 357,Jeff Strunk in the Keystone Racing No. 126 and Craig Von Dohren driving the Dick Biever No. 14s are set to bring their PA Dual-Track battles south.

Also out of the Keystone State, red-hot Ryan Watt of Boyertown, Pa., will search for his first victory in the state of Delaware after several strong efforts at both Delaware International and Georgetown. Watt is coming off huge wins at both Big Diamond Speedway in Minersville, Pa., and Bridgeport.

The victor in Race No. 1 of the ‘Full Throttle’ series back in early April was Hellertown, Pa., standout Rick Laubach, who has several victories at Delaware International including the year-end State Championship show.

The Delaware drivers will be looking to keep the lion’s share of the money in their home state, including most recent winner at the speedway Jamie Mills of Milford, Del., in a Blue Hen Racing entry and his teammate/nephew Joseph ‘Jo Jo’ Watsonwho is back in full-time competition this year. Delaware International Opening Night winner Matt Jester of Milford, Del., will strap into the Clearview Farms No. 62 small-block to do battle.

Always a threat at Delaware International is seven-time and defending Modified champion H.J. Bunting of Milford, Del., in the Jake Marine-sponsored No. 85.

Complete rules, prices, times and race information for the ‘Diamond State 50’ can be found at the following link: http://bdmotorsportsmedia.com/diamond-state-50-rules-prices-general-info/