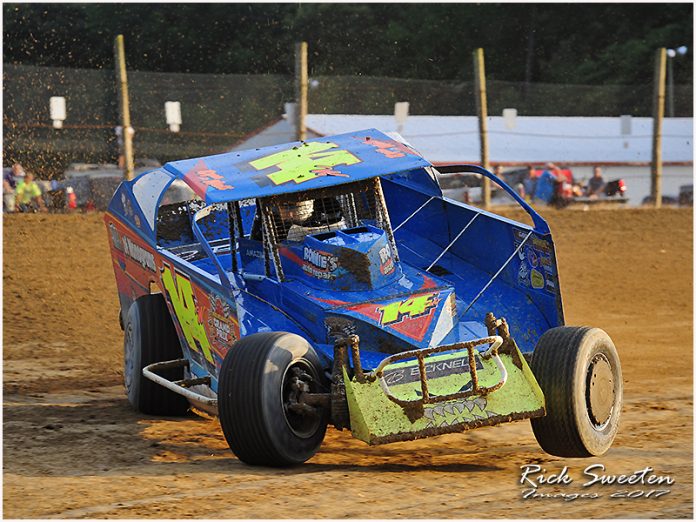 A stellar field of 34 Big Block Modifieds turned out for Thursday night’s Diamond State 50 at the Delaware International Speedway. It was the second event of the Full Throttle Series and the third round of the Bob Hilbert Sportswear Short Track Super Series Fueled by VP Velocita South Region.

David VanHorn drew the pole starting spot with Duane Howard starting on the outside. Howard jumped out front at the drop of the green with Craig VonDohren charging in third. Friesen started in the eighth spot but was already up to fourth by lap three. One lap later he dropped VonDohren to fourth. VonDohren’s slide continued as Ryan Godown took the fourth spot..

VonDohren didn’t give up as he regained fourth on lap ten. Four laps later the yellow was out as Jimmy Horton slowed. The next lap it was JoJo Watson slowing and the yellow was out again. Friesen got by VanHorn on the restart and took Howard high in the second turn to take the lead for lap 20.

Fans attention now turned to veteran Frank Cozze who started deep in the field and was in the high grove headed to the front. Cozze cracked the top five at the halfway sign the locked into a back and forth battle with Jeff Strunk for the spot.

With 14 to go VonDohren’s hopes were dampened when he slowed to bring out the yellow. The top three were still Friesen, Howard and VanHorn with Cozze now up to fourth and Strunk fifth. Seemingly out of nowhere, Ryan Watt blasted into the top five on the outside. Watt shot by Cozze and VanHorn then with ten to go to second from Howard.

Godown stopped to bring out the yellow with six to go and on the restart Watt grabbed the lead with Friesen slipping all the way back to fourth behind Cozze. Cozze’s great drive would come to and end with just three to go when the car bounced odd the back straight wall and came to a stop.

Watt would not be denied his first Delaware International win as he led the remaining three laps to take the checkered. Howard ended a strong drive in second with Friesen getting third. Fourth went to Kressley and Jordan Watson recovered from early problems to come on strong and finish in fifth.

“I love coming down here,” said Watt. “The fans are great. I love the track here. We have had a bunch of second down here and led a bunch of laps but just couldn’t seem to put it in victory lane. The track was a little too heavy at first and I needed it to go away a little. Then I lost some brakes and couldn’t run on the bottom. But when the top started coming in I didn’t have to use my brakes.”