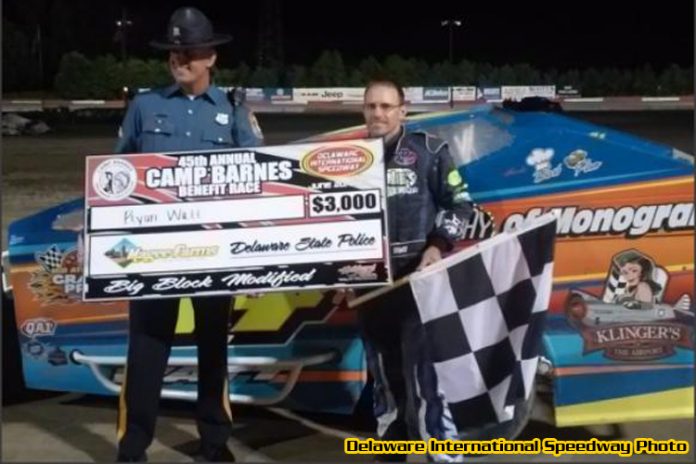 DELMAR, DE – Tuesday night’s 45th Annual Camp Barnes Benefit at the Delaware International Speedway was a huge success. A packed grandstands and over 120 race teams in the pits produced an action packed night of racing. The large crowd on hand greated the return of injured promoter Charlie Cathell with a standing ovation when he brought his familiar road grader on the track at intermission. The crowd also stood to pay tribute to veteran racer and speed shop owner, Clarence “Snookie” Vent as the Delaware State Police paid tribute to him and his family for their lifetime support of the event.

Ryan Watt has taken a real liking to the Delmar half mile. After winning last Thursday’s Diamond State 50 worth over $5000 Ryan spent the week vacationing in nearby Ocean City, Md. Watt returned on Tuesday night and collect his second consecutive victory and added an additional $3500 to his earnings. Mark Pettyjohn made it two in a row in the S.R. Pete & Sons Late Models while Jeremy Harrington got his first career win in the AC Delco 602 Sportsman. Other winners on the night included: Joe Warren in the RUSH Crate Late Models, James Hill in the Mod Lites, Matt Esham in the Super Trucks and Mel Joseph, Jr. in the Little Lincoln Vintage cars.

A solid field of 23 NAPA Big Block Modifieds participated in Tuesday night’s program. The three heats were won by Ryan Watt, Scott VanGorder and Ron Roberts. With the inversion draw, Jordan Watson started on the pole and led the first five circuits.

Watt took over on lap six when Watson bobbled in turn four. Watson recovered at at the halfway sign the top five were Watt, Watson, Shawn Ward, Jimmy Horton and Howard O’Neal.

Watt was like a rocket and opened a 6.45 seconds lead before Kevin Sockriter slowed bringing out the yellow with eight laps to go in the 25-lap feature. Watt would continue to drive away on the restart and easily took the win. It was his second win in six days at the track and with Tuesday night’s winnings of $3500 took his total for the week to over $8000!

“This car has been good where ever we have raced,” commented Watt. “Ron Roberts that owns the car is from Delaware and has always supported this Camp Barnes race.”

Watson finally shook a string of bad luck at the track finishing in second with Craig VonDohren coming on strong in the late stages to finish in third. Ward completed a solid run in fourth and Horton rounded out the top five.

Rookie Kenneth Peek took a nasty flip after bicycling in the third turn in his heat. Peek was not injured in the incident.

Mark Pettyjohn made it back to back wins in the S.R. Pete & Sons Super Late Models. Pettyjohn started on the pole in the 25-lap feautre after winning his heat and having the quicker lap time over Potomac and Winchester Speedways champion, Dale Hollidge who won heat one.

With only one lap in the caution flew for debris and under the yellow Ross Robinson came to a stop after being hit by something from the track and momentarily stunning him. Robinson drove the car to the pits and was done for the night.

Pettyjohn remained solidly in control but the battle behind him was intense. Hollidge, Austin Hubbard, Donald Lingo, Jr. Andrew Mullins and Kerry King put on a fierce battle. By halfway Lingo had worked into second with Hollidge hanging on to third while King worked by Mullins for fourth.

Ricky Elliott exploded a right rear tire and smacked the front straight wall with two laps to go bringing out the final yellow. Pettyjohn was on his game on the restart and drove to his second consecutive win collecting $3625. Lingo finished second with Hollidge, King and Mullins rounding out the top five.

Herb Tunis took a nasty series of flips in the heat but was not injured.

Jeremy Harrington and Dwayne Crockett topped the qualifying heats for the AC Delco 602 Sportsman. Harrington would set sail from the drop of the green with Joe Tracy dropping Crockett to third on lap two to take up the chase. Scott Hitchens quickly worked into the top five with David Jenkins in fifth.

By halfway Harrington had built a comfortable lead as Adam White worked his way up into fifth. The only caution would come with two laps left to go when Freddy Massey came to a stop. Harrington handled the restart with perfection and drove to his first career win at the speedway.

“I have never ran good here,” said Harrington. “This place has been my kriptonite.” Tracy ended a solid run in second with Crockett third. Fourth went to Hitchens and White rounded out the top five.

Five time track champion, Joe Warren was once again on top of his game in the RUSH Crate Late Model division. Warren and invading Austin Hubbard captured the heats for the 20 cars. Warren defended his pole starting spot from Matt Hill at the start of the race leaving the battle between Hill and Hubbard.

Hubbard grabbed second but Hill took it back two laps later. A rash of cautions made for wild restarts. On lap six, Hubbard and Chip Disharoon locked horns and collected Mike Wharton who got upside down. Wharton was not injured.

The field settled down in the final five laps with Warren making no mistakes for his third win of the year. Hill held on for second with Hubbard getting by Tyler Reed to finish in third and fourth. Disharoon rounded out the top five.

A season high of 17 Mod Lites were on hand Saturday night.James Hill and Tim White captured the heats with Hill starting on the pole. Hill edged away from the field while Nick Sapp, who was making his first start this season battled with White for second.

Two mid-race cautions would keep Hill from hiding from the rest of the field but he would have no problem leading from wire to wire for the win. White was able to get by Sapp with four to go to finish in second with Sapp settling for third. Fourth went to Nick Nash and Jason Musser rounded out the top five.

The Super Trucks put on a great run in their 10-lap feature. Jerry Hill drove past Dale Elliott to take the lead at the start. Matt Esham followed into second and the battle was on. The only caution came on lap four when Mike Kennedy came to a stop.

On the restart, the battle resumed between Hill and Esham. Esham mounted a challege for the lead with the to go but Hill held him off. Esham got one final run and took the lead with two to go and then went on to post his second career win and his first in the Camp Barnes Benefit. Hill finished in second and Robert Smith drove from 18th to finish in third. Fourth went to Brian Meisenholder and Bobby Reed rounded out the top five.

In the Little Lincoln Vintage 10-lap feature, Mel Joseph, Jr. grabbed the lead from Joe Tracy and led wire to wire for his third consecutive Camp Barnes win. Landy Adams got by Tracy with two laps to go to finish in second with Tracy third. Kirk Lawson recovered from a first lap flat tire to climb back to fourth at the finish and veteran Dave White rounded out the top five.