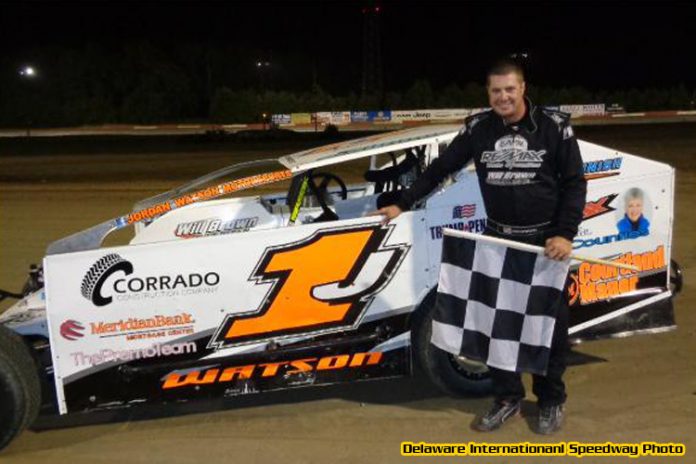 DELMAR, DE – Saturday night was a good night for new or first time winners at the Delaware International Speedway. Matt Glandon got his first career win in the RUSH Crate Late Models while Jordan Watson in the NAPA Big Block Modifieds, Dylan Evans in the S.R. Pete and Sons Late Models and Matt Smith in the AC Delco 602 Sportman all scored their first wins of the season.

The NAPA Big Block Modified heats were a prelude to the 25-lap feature with Jordan Watson and Jamie Mills picking up the wins. Watson would start the main in third but shot by Brandon Watkins and Dale Hawkins to lead lap one.

By the second circuit Mills had blasted from ninth to fifth. One lap later he shot by both Brandon and Bobby Watkins for the third spot behind Hawkins. Hawkins put up a good fight until lap eight when Mills moved by.

JoJo Watson had gotten by H.J. Bunting to crack the top five and was up to fourth by halfway. Matt Jester, who started in tenth followed into fifth. Jordan wasn’t letting up and had built a 7.5 second lead when the first caution flew on lap 15 when Brandon Watkins slowed.

On the restart Jester was able to get around Hawkins for fourth and once again Jordan opened a 3.5 second lead over Mills and his brother JoJo. The final yellow was out with five to go when Howard O’Neal came to a stop. As Jordan Watson again pulled away on the restart, JoJo Watson went to work on Mills taking second with three to go. That’s how they would finish with Jordan getting his first win of the season and his brother JoJo second. Third went to Mills with Jester fourth and Hawkins fifth.

Dylan Evans established himself as the driver to beat at the start of the 20-lap S.R. Pete & Sons Late Model feature. Evans shot past Geoff Carey and Max Robichaud on the first lap to take the lead. Donald Lingo, Jr. looked like a sure threat moving from fifth to second by lap two and Mark Pettyjohn, looking to make it three in a row, shot from seventh to third.

By halfway, Evans had a 1.5 second lead over Lingo and Ross Robinson had just taken over third. Lingo’s challenge would end two laps later when a broken drive shaft slowed him to a stop in the second turn. It was Robinson’s turn to crank up the heat on Evans but the young lion was up for the challenge hold him off on the restart.

The yellow would be out for a final time with four to go for a spin. Once again Evans was not to be denied his first win of the season as he shot to the checkered. Robinson settled for second with Pettyjohn third. Fourth went to Amanda Whaley and Ricky Elliott came on strong after the final restart to grab fifth. Lingo and Whaley won the heats.

Matt Smith would edge by pole sitter, Nick Alberti to take the lead at the start of the 15-lap AC Delco 602 Sportsman feature. Last year’s Rookie of the Year, Adam White took second on the following circuit while Ryan Riddle was putting on a good drive in fourth.

Scott Hitchens started in ninth and had cracked the top five by lap four. Hitchens picked off one car per lap and by lap second was up to second. Jordn Justice followed Hitchens up through the field and was third by halfway.

Justice got by Hitchens with five to go forcing Hitchens to press a little too hard as he got sideways in turn three. The caution was quickly out but Hitchens was able to recover without spinning and was allowed back to his third spot.

On the restart Justice began to pressure Smith for the lead but he too got out of shape allowing Hitchens to regain the second spot. At the checkered it was Smith posting his first win of the season with Hitchens second and Justice third. Fourth went to White and Riddle held on for fifth. Heats were won by Hitchens and Justice.

The RUSH Crate Late Models did double duty on Saturday night starting the night with their makeup feature that fell victim of the curfew two weeks prior. Matt Glanden held the lead from the pole with Joe Warren glued to his back bumper and Sparky White getting by Trevor Collins for third.

The race went non-stop from lap three until two laps to go. Glanden, who had been spot on up to that point didn’t let the pressure get to him and nailed a perfect restart to hold off the five time champion. Sparky White nipped Warren for second on the final lap with Warren settling for third. Fourth went to Matt Hill and Tyler Reed rounded out the top five.

The regular 15-lap feature appeared that it was going to be a repeat of the first. Glanden jumped out front with Warren again right on his spoiler. Matt Hill diced with White while Reed held fifth. The race would go caution free and with two laps to go the leaders had caught the back of the field. On the final turn Glanden hesitated for just a second and Warren was able to drive by for his fourth win of the year. Glanden ended a fantastic night in second with White winning the battle over third with Hill. For the second time that night, Reed would finish in fifth. Heats were won by Brandon Sturgis and Hill.

The Mod Lites ran double features – the regularly scheduled 20-lap Fall Championship qualifier and the 15-lap curfew makeup from two weeks prior. The night started with the 15-lap makeup feature. Jason Musser set the early pace. Jake Nelson was running strong but lost and engine, rolling to a stop with fire under the hood. The fire was quickly extinguished and Nelson was not injured.

On the restart James Hill began to pressure Musser, taking the lead at the halfway sign. The remainder of the race was caution free and Hill drove to his fifth checkered of the year. Musser maintained second with Ray Gulliver third. Fourth went to Tim White and Aaron VanVorst rounded out the top five.

Heats were won by Hill and Tim White. In the 20-lap Fall Championship qualifier, Musser would again lead at the start. The red was out on lap three when Nelson got out of shape coming off of turn two and Gulliver launched over his front wheel at full speed. Gulliver’s car gyrated into the air hitting the back straight billboards about ten feet above the track. The car took out about 24 feet of signage and landed outside the speedway. Gulliver was able to climb from the car uninjured.

Musser would be able to hold the lead on the restart but once again Hill took the lead off of turn two and never looked back. Tim White followed into second but could only watch Hill fade in the distance. Hill picked up his second win of the night his sixth of the season to remain undefeated. White finished in second with VanVorst third. Musser finished in fourth and Nick Nash rounded out the top five.

Joe Tracy led the first lap over Bunky White in the 12-lap Little Lincoln/Street Stock feature. Mel Joseph, Jr. blasted from eighth to second on lap two and had just taken the lead when a flat tire sent him to the pits for a fresh one.

Tracy would hold off Landy Adams for the remaining distance to pick up his first win of the year. Joseph rocketed through the field to finish in third after restarting in the rear after a tangle on lap 11. Kirk Lawson followed him through for fourth and Bunky White rounded out the top five. Sean Smith was first Street Stock finishing in seventh.

A note from Tuesday night’s Camp Barnes Benefit: Mike Wharton suffered a broken thumb in his flip in the RUSH Crate Late Model feature and on Saturday night former Late Model champ, David Pettyjohn was behind the wheel. Also the photo finish for fifth and six showed Whaley ahead of Mullins.