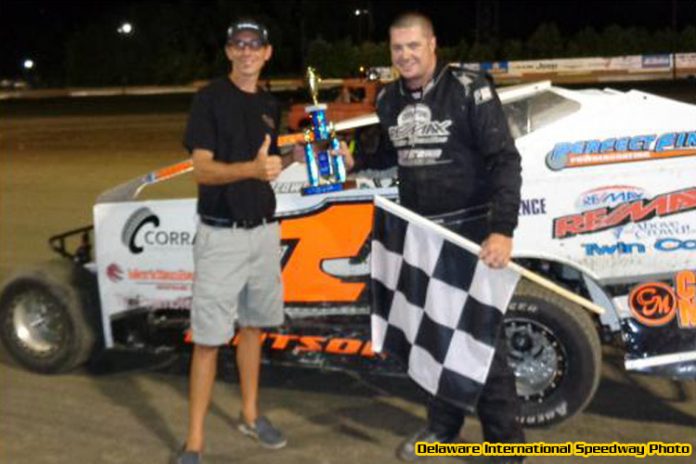 DELMAR, DE – The Delaware International Speedway presented R.C. Holloway and the Delmarva AC Delco Dealers Night on Saturday and the three premier divisions in dirt track racing: Sprints Cars, Big Block Modifieds and Super Late Models plus strong support divisions packed the house. Davie Franek didn’t panic as he caught Curt Michael late in the race to win the URC Sprint main. Jordan Watson made it two in a row in the Big Block Modifieds while Ricky Elliott returned to victory lane in the S.R. Pete and Sond Super Late Models. Ryan Riddle got his first career win in the AC Delco PSC 602 Sportsman while defending champion won the RUSH Crate Late Models and Tim White got his first win this season in the Mod Lites.

The United Racing Club was on hand for Saturday night’s R.C. Holloway sponsored show at Delaware International. When nine-time URC champion, Curt Michael started on the pole there were some who thought the outcome of the race was a done deal.

After three attempts to get the first lap in it appeared to be true as Michael quickly opened a straightaway lead over Kevin Nagy. The complexion of the race would change when Josh Weller came to a stop against the inside wall at the exit of turn four to bring out the final yellow.

On the restart, point leader Davie Franek, who started in seventh, shot by Troy Betts and Christopher Allen, Jr. for fourth and Bill Unglert got by Nagy for second. Once again Michael shot away from the field but Franek was on the move gaining third on lap nine and one lap later got by Unglert of second.


With the race staying green Michael was working traffic by halfway. The leader worked his way past the back markers but as he marched further through the field the battles in front of him gave him more concern. Franek took advantage of the situation and with four laps to go split a lapped car with Michael to take the lead.

Once out front Franek opened a comfortable lead and drove to the win. “The cars were much faster in clean air,” said Franek. “I was hoping that once Michael caught lapped traffic it would slow him down and it did.” Michael had to settle for second with Unglert, Betts and Davie Sammons rounding out the top five. Heats were won by Franek, Adam Carberry and Unglert.

In victory lane, two-time URC champion, Garry Gollub was inducted into the Hall of Fame.

Rookie T.J. Williams started on the pole on R.C. Holloway Night at the speedway after winning his first heat with second heat winner, Robert Dutton lining up in fourth. Brandon Watkins went to the front at the drop of the green and by lap four was being chased by his father, Bobby, in second.

Jordan Watson made a steady march through the field after starting in seventh and was quickly up to third while Matt Jester, who started in ninth, was quickly up to fourth. Watson got by Bobby Watkins on a lap five restart after Williams got around. It only took two more circuits before Watson moved by Brandon Watkins for the lead.

By halfway, Jester had climbed into the second spot ahead of Brandon Watkins with Jim Britt and JoJo Watson filling out the top five. The final caution would fly with eight to go when Howard O’Neal rolled to a stop. On the restart, Jester went to work on Jordan Watson for the lead and got out front with five to go.

Watson regrouped and reclaimed the lead one lap later. Jester would remain a threat but it would be Watson posting his second straight victory. JoJo Watson got by Brandon Watkins with two to go for third and Jamie Mills came from the rear after a lap two tangle to finish in fifth.

Donald Lingo, Jr. shot to the point at the start of the 20-lap S.R. Pete & Son Super Late Model feature with Rob Schirmer following in second. Ricky Elliott took the second spot a lap later but locked into a battle with Nick Davis. Davis would hold the second spot for three laps until the caution flew for a tangle involving Jason Dean and Geoff Carey.

On the restart Elliott regained the second spot with Mark Pettyjohn, who was looking for his third straight win, following into third. Elliott was now focused on the leader Lingo who was solidly in control on the bottom.

Elliott continued to work the top groove and with five to go was able to get by Lingo for the lead. He would then move to the bottom and open up some breathing room allowing him to post his second win of the season. “Jake Marine bought me this new car two weeks ago,” said Elliott. “He has been great to me and instrumental in furthering my career.”

Lingo ended a great run in second with Pettyjohn third. Fourth went to Amanda Whaley with point leader Ross Robinson rounding out the top five. Heats were won by Lingo and Elliott.

Trevor Collins got around pole sitter, Scott Tessman to take command of the 15-lap RUSH Crate Late Model main on lap one. Point leader, Joe Warren got around on lap six to bring out the only caution of the race. Sparky White restarted in third but got by Chip Disharoon for second on the restart.

White mounted a challenge on Collins and with two to go got underneath for the lead. David Pettyjohn followed into second and would chase White to the checkered. White got the win with Pettyjohn second and Collins turning in his best performance finishing in third. Fourth went to Matt Glanden and Disharoon rounded out the top five. Heats were won by Tessman and White.

Danny Smack led the first lap of the 15-lap AC Delco PSC 602 Sportsman feature. Ryan Riddle started on the outside of the second row and took the point on the second circuit. Nick Alberti took advantage of a lap three restart to grab second.

Smack got around just prior to halfway bringing out the yellow. On the restart, Joe Tracy got by Alberti for second while Jason Rush and Jordn Justice swapped fourth. Tracy could get to Riddle’s rear bumper but no further and Riddle notched his first career win in the division. Justice got by Alberti with one to go to finish in third and Rush rounded out the top five. Heats were won by Alberti and Matt Smith.

Jake Nelson led the first four circuits of the 15-lap Mod Lite main before James Hill, who started in ninth took the lead. Ray Gulliver was back in top form after his crash of two weeks prior and climbed into second.

Hill would pull away from the field while Tim White managed to work by Gulliver in the closing laps for second. Hill crossed under the checkered first but was penalized ten positions per the rule book for switching cars between the heat and feature and not reporting it to the handicapper in the pits. White was credited with the win with Gulliver, Nelson, Nick Nash and Aaron VanVorst rounded out the top five. Heats were won by Nelson and White.