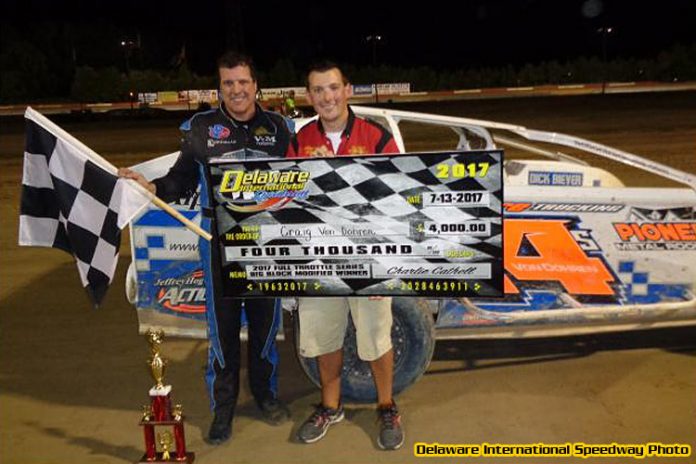 DELMAR, DE – A heat wave didn’t stop the action Thursday night as the Delaware Internaitional Speedway presented round three of its “Full Throttle” series. Craig VonDohren of Oley, Pa. became the third different winner in three events collecting $4000 plus lap money from Jeff Brown and Chesapeake Paving for his efforts.

With temperatures hitting nearly 100 degrees there was a drop in the car count but not in the quality of the race that saw six lead changes between four different drivers. Pepsi Bottling Ventures of Salisbury, Md. came to the aid of the fans providing coolers of free ice cold Aquafina water.

Heat races for the 23 cars were won by VonDohren, Matt Hawkins and Jordan Watson. The top two heat finishers drew for starting positions putting Scott VanGorder on the pole for the Delaware State with Watson and VonDohren in the second row.

VanGorder set the pace for the first two circuits before Jordan Watson moved on top. The top four cars were under a blanket as VanGorder fought his way back on top for lap four but lost the lead for good when Watson came back by one lap later.


While this was going on VonDohren and Watt were swapping the third spot. VonDohren got by VanGorder for second with Watt following into third. The first yellow flew when Eric Vent and Scott Hitchens came to a stop. Watt got by VonDohren on the restart and a lap later took the lead from Watson.

Watt would slow dramatically on lap 15 and the caution was quickly out for a second time. Watt however kept moving as the caution flew and lap 16 did not get in, putting Watt back on the point for the restart. Watt took off on the green but once again the car seemed to starve for fuel in the third turn and Watson regained the lead.

Watt would retire just before the halfway sign as Watson and VonDohren battled for the top spot. VonDohren moved on top just past halfway as Duane Howard climbed to third. VonDohren ran the top groove in the one/two turns and the bottom in the three/four turns and was able to pull away.

The final yellow came with twelve laps to go when Vent came to a stop. VonDohren continued to run the high/low line around the track for the final twelve circuits for the win. “This things been good,” said VonDohren about his car. “The first time we ran down here we run good but got mud in the wheel and broke and axel with one to go, but it has run good.”

Jordan Watson held on to second with Howard coming from eighth to finish third. Jimmy Horton drove a consistent race to finish in the fourth spot and JoJo Watson rounded out the top five after starting in 11th.

George Richardson, in only his second night out, would start on the pole in the 20-lap AC Delco 602 Sportsman feature but it would be Scott Hitchens grabbing the top spot from his second starting spot to lead lap one. Tom Tanner took over the second spot and Adam White followed into third.

Jason Rush managed to work by Tanner to take second just before halfway but was unable to close on Hitchens. Hitchens went on to collect his fourth win of the year and the $1000 first plus lap money from L&J Sheet Metal. Rush had his best finish to date holding on to second with Jordn Justice garnering third. Fourth went to Tanner and Adam White rounded out the top five. Heats were won by Tanner and Hitchens.

James Hill started on the pole by virtue of heat race win and set the pace at the drop of green in the 15-lap Mod Lite feature. Tim White held the second spot but gave it up briefly to Eddie Towers driving Hill’s backup car. White regained the spot a lap later.

The final yellow would fly with four to go when Towers went up in smoke. Hill held off a bid by White on the restart and would cruise to his seventh win of the season. White finished in second with Nick Nash third. Fourth went to Kirk Miles, Sr. and Jake Nelson rounded out the top five. Heats were won the Hill and Towers.

Jerry Hill sprinted from fifth to take the lead on lap one of the 12-Lap Super Truck feature. David Smith drove all the way from 16th to second but spun while going for the lead on lap three. His brother, Robert Smith took up the chase on the restart and moved on top just past halfway.

Once out front Robert Smith would never be headed as he drove to the win worth bragging rights over his dad and two brothers who were also in the field. Hill held on to second with Matt Esham third. Fourth went to Brian Meisenholder and Matthew Smith rounded out the top five.